Why is it that do-it-yourself projects seem so simple in theory, but when it comes to actually doing it, 'simple' seems to go out of the window.
Not that we are any stranger to doing it ourselves.  We built a large two story addition to our house, which included a dining room, vaulted family room, and garage, doing 99% of the work ourselves.  One thing we did figure out though was that things always took about three times as long as we thought they would.
We got the brochure for the decking stuff, read the website, watched the video on the website, and then got at it.
The basic idea was that you lay the vinyl out, then flip the first half back, put glue on the wood and the back of the vinyl, and let it dry to the tacky stage.  The last thing I had watched was the video, which showed Mr. "It's just that easy" Shel Busey putting the glue on the wood first, and then the fuzzy vinyl back.  So that is what we did.  Next thing the glue on the plywood is dryer than the tacky stage, okay, almost totally dry, and the glue on the vinyl is still at the wet stage. We leave it a bit longer, but we had neglected to weight the edge down (which is only mentioned in the brochure).  Come back, and the vinyl had started to roll up on itself.  Since the glue on the vinyl wasn't yet tacky enough, there now was glue on parts of the vinyl surface.  We get it rolled back out and weighted down with paint cans.  Now what?  So we get out the hair dryer, and get the stuff to the tacky stage.
We flip it back over, and realize that there is quite a bit of glue in spots on the top of the vinyl, from it rolling up.  So we are getting the vinyl spread out and glued down, pushing the air bubbles out, and trying to wipe the glue off the top of the vinyl all at the same time.  Of course by now, the glue IS tacky, so won't wipe off, so we spend quite a bit of time trying to peel and roll the glue off.  Get that done as best we can.
Flip the second half of the vinyl back over the first half, get it glued up, this time doing the fabric first, which is what it actually what it said in the brochure, so at least it's tackiness and the glue on the plywood's tackiness were a bit more coordinated.  Get it spread out and glued down, but the edge down the middle of the deck refused to stay down.  We repeatedly pushed it down, and finally resorted to stapling it in a few places along the edge.  We had to tarp the whole deck up again, as the dew was starting to fall.
On Monday we kept watching the weather, and finally decided to have another go.  I pulled out the staples and the edge of the vinyl STILL was refusing to stay down.  I got on the phone to customer service.  When I told her what vinyl we were using, she said we should have been using the cold weather glue.  And in what set of instructions did it ever state that? Well not anywhere that we saw.  Then she said to use the glue that you use to stick the vinyl to the metal drip cap, which we did, and that seemed to do the job.
We got the first half of the second sheet glued up and stuck down, and were about to start the second half when a few raindrops started to fall.
Whipped the tarps back over everything, and left it until Tuesday. 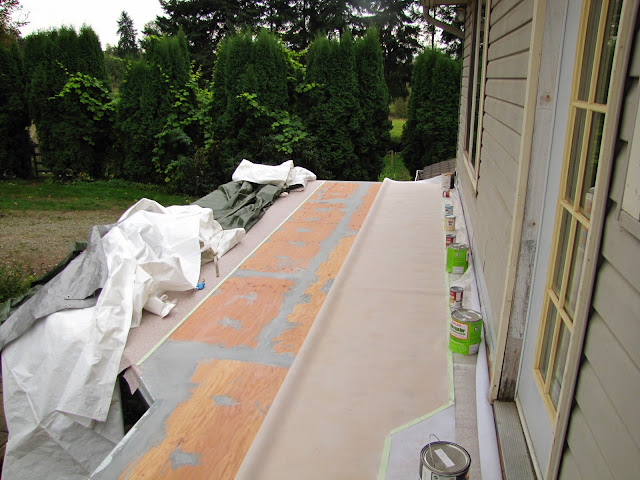 On Tuesday things seemed to go better.  The sun was shining, things seemed to stick down like they should, and we got the vinyl all glued down, the over lap seam glued together, and the vinyl glued up the wall.  Of course there is lots of finishing work to be done.  The vinyl has to be glued with a special glue to the drip cap, which is different to the glue that you use on the seam, which is different to the general glue for the main part of the deck.  Actually, on the video, they were gluing the overhang to the drip cap with the regular glue, but that didn't work for us. We got some of the edge glued down, and then Wednesday Larry got the rest of the edge done, other than the tricky bit at the end where it butts into the edge of the garage roof. 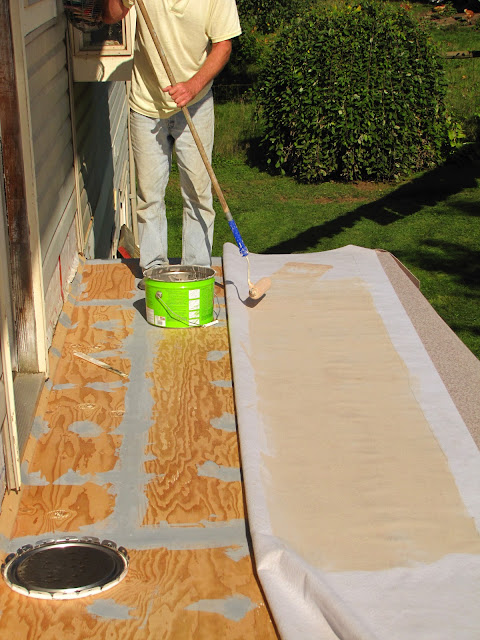 This is to remind us that, well.... there are no stairs. 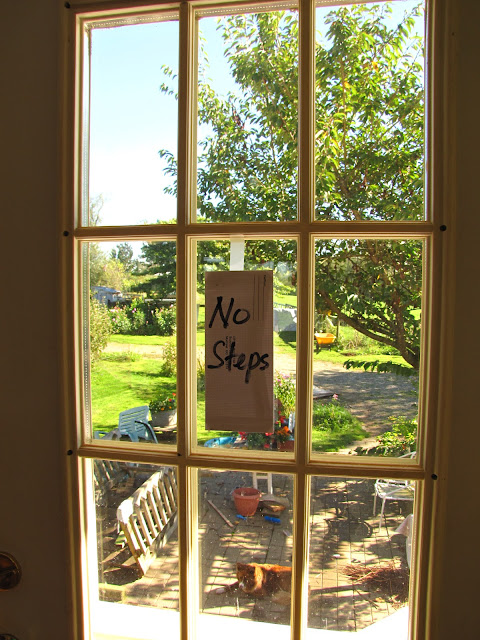 So if the two border collies are barking at the back door to desperately get out, because they think there's something out there, well don't let them out that door.  Luna at least, would probably launch herself into space in the excitement of trying to beat Jake down the now non-existent stairs
And my sister got the honour of being the first one to sit out there and enjoy the sunshine.  She had wanted to do that the first morning she was here, but at least she got to sit out there right before I took her back to the airport Wednesday morning. 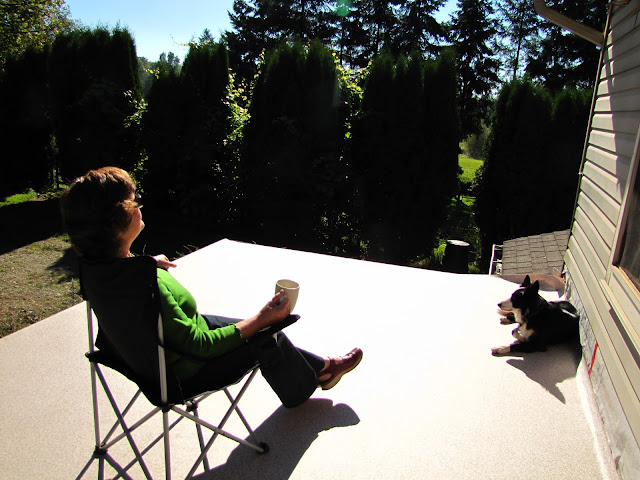 Suzanne, this is for you.  Another creature out sunbathing 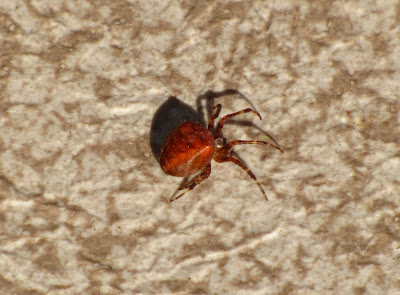 And I'm trying to figure out why I got all the grey hair:(  She's not that much younger than me. 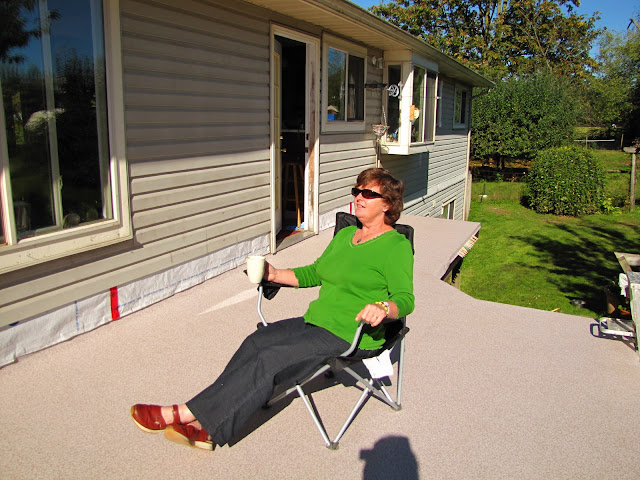 Today Larry got just about all the fiddly bits done, and he did a mighty fine job in the corner behind Luna, two photos back, where the deck and roof intersect.  We'll connect the old stairs back to the deck, and then probably spend most of the winter trying to decide on what kind of railing we like/want to spend all that money on.
And I'm thinking of sending a memo to the decking company, to ask them to get all their application instructions to jive with one another.
Posted by Karen at 8:11 PM