I always have visions that we are going to leave home at some nice early hour, but no, despite most of the packing being done the day before, it was heading towards 11am before we pulled out.  I guess it doesn't help when I say things like 'have you checked the tire pressure', which then involved topping up 7 tires with air.  It all takes time....
Anyway, we finally hit the road.  Calli rides in the trailer, where there is more room for her to stretch out, and she is the dog the least likely to be bothered by things rattling and banging.  Jake would be freaking out back there.  Jake and Luna ride in the small area behind the truck seats, where the little sideways jump seats are located.  Every once in a while Luna would pop up, rest her front feet on the center console, check to see Larry was going the right way, wasn't speeding, and maybe if she was lucky, she could get a pat or two. 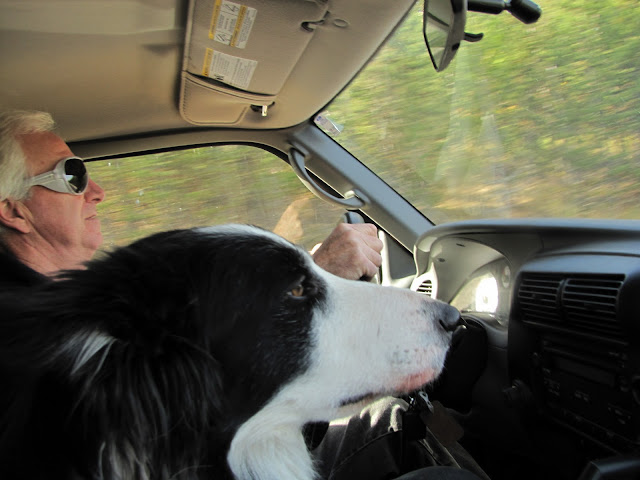 After about three hours on the road, we made a stop at Princeton.  The dogs got a walk, a swim in the Similkameen River. The trees on the other side were glowing in the sun. 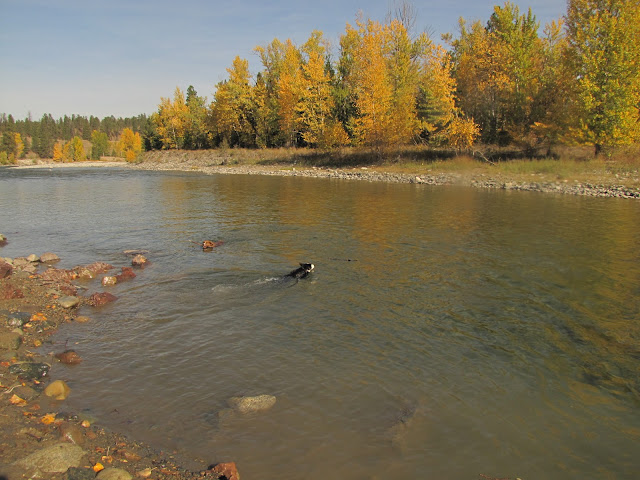 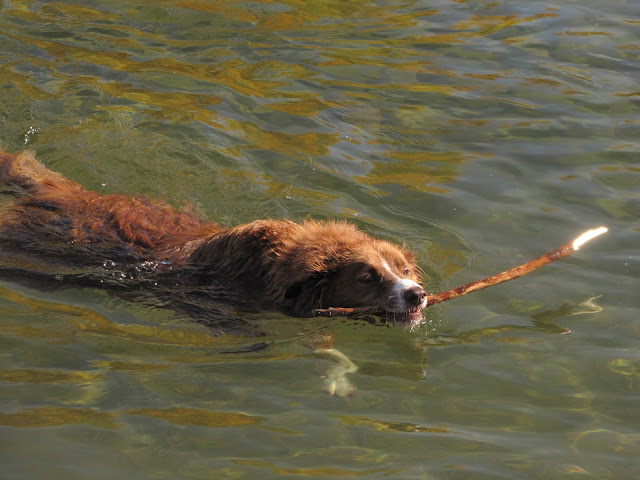 A short walk back along the Trans Canada Trail and we hit A & W for a late lunch.  Nice friendly folk there.  The young guy came running out with Larry's sunglasses that he had left on the counter, and then when he saw the dogs, he asked if they'd like a treat.  So he came back out with a milkbone for each of them.   We walked back towards the truck, and I stopped in this gazebo that had panels with some of the history of the area.  A lot of reading, but after I got so far I gave up.  Had already come across two spelling mistakes (dawned instead of donned, and site instead of sight).  Okay, I'm a bit anal about things like that, but come on.....didn't anyone edit it before the expense of getting it all printed onto big wood panels and put up for the tourists to read?
Next stop was a fruit stand in Keremeos.  Loads and loads of different squash and pumpkins to pick from.  Inside I bought some prune plums for jam, and we bought a few apples to taste test.  Granny Smith, Elstar, Gala, and Golden Gala.  The Golden Gala won hands down. 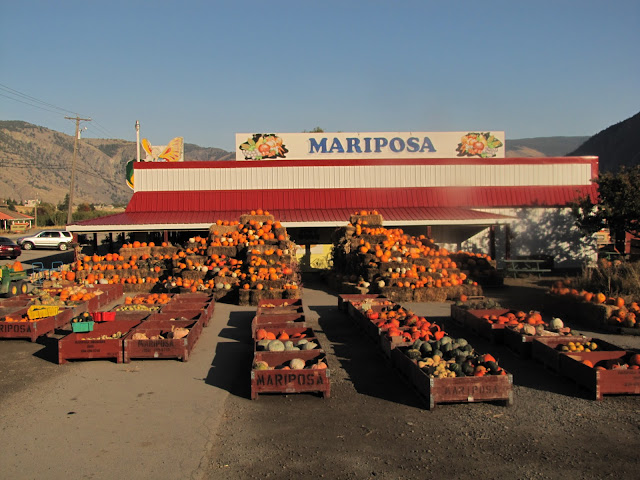 We headed for Okanagan Lake Park.  There are two campgrounds there.  One is on the hillside above the lake, but it was closed for the season.  The other is about a kilometre south.  It started life as a gravel overflow lot for the other campsite, and I remember being in it as a kid.  Now they've planted trees and divided it up like a proper campsite, and it is on lake level.  We'll probably never be able to afford waterfront property, and this might be as close as we'll get. 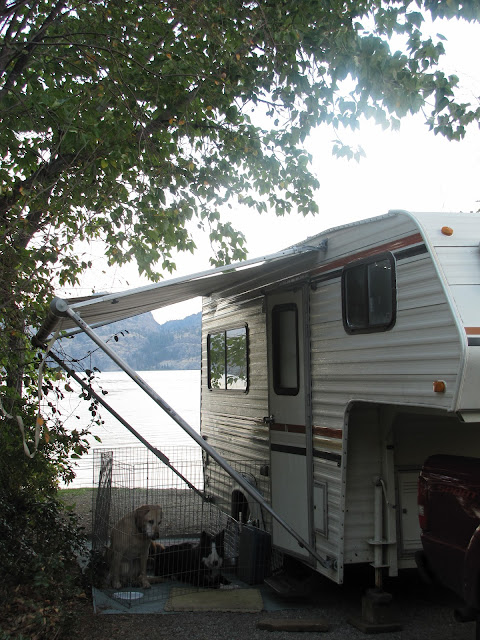 The view out of the back window of the trailer. 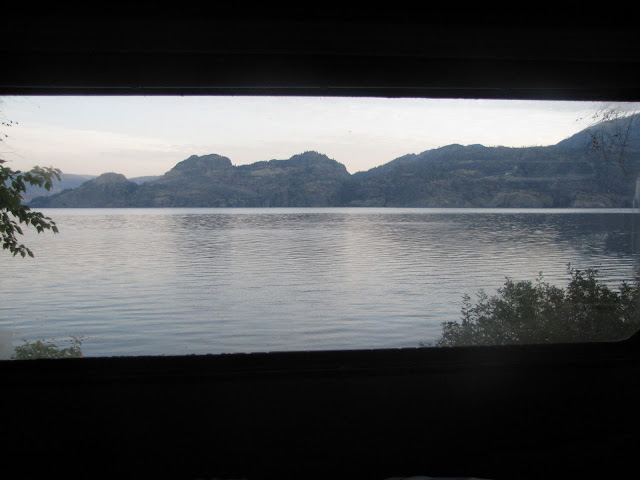 The next morning I was up at the crack of dawn, which really isn't very early this time of year.  Okay, it really wasn't as early as it looks, but I wanted the meteor  jet trail to show up, and I liked how this turned out. 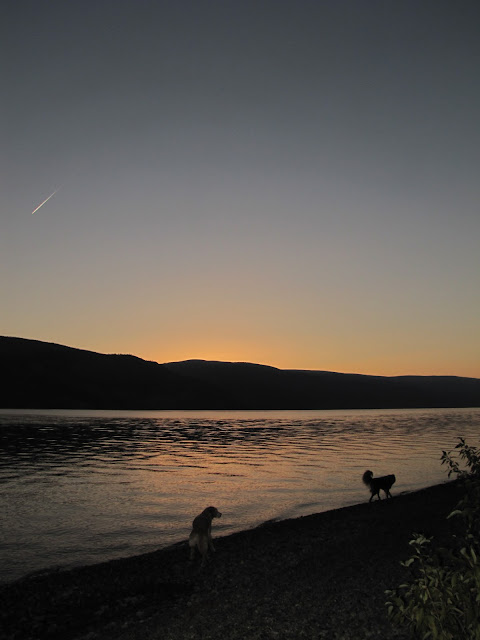 This was more like it.  The sun wasn't up yet. 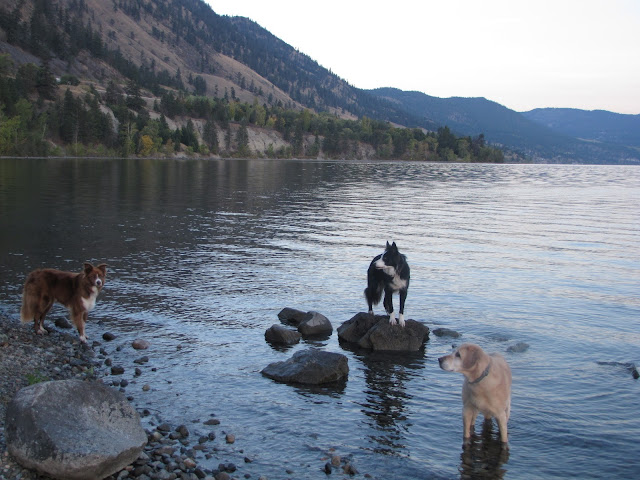 Do you see what's coming around the corner, that Luna's looking at? 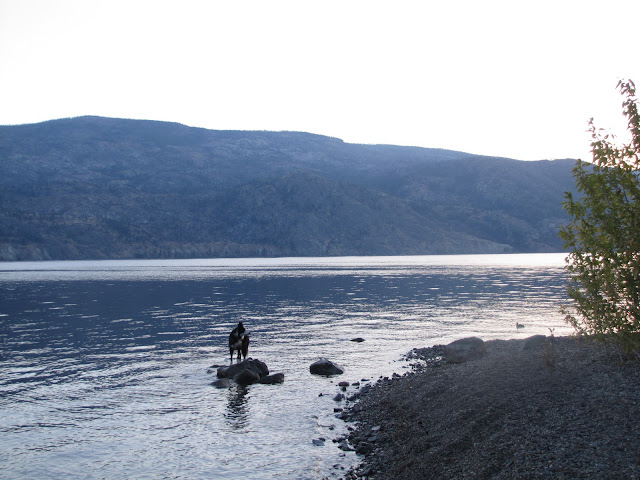 A mallard hen, obviously used to mooching off the tourists.  Luna played 'herd the duck' from the water's edge. 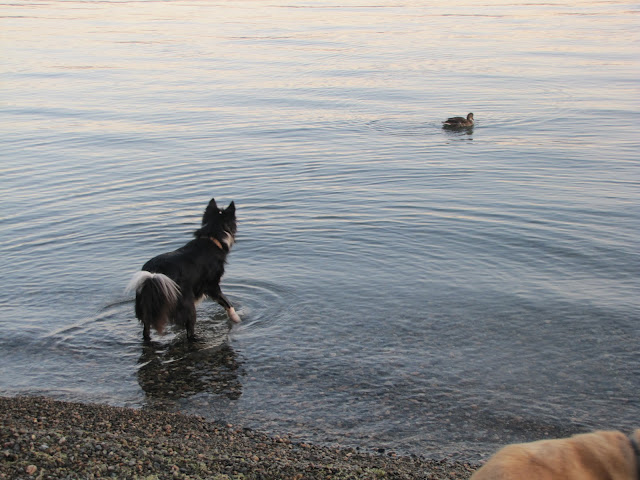 We dragged our chairs out into the sunshine, and taste tested the first two apples 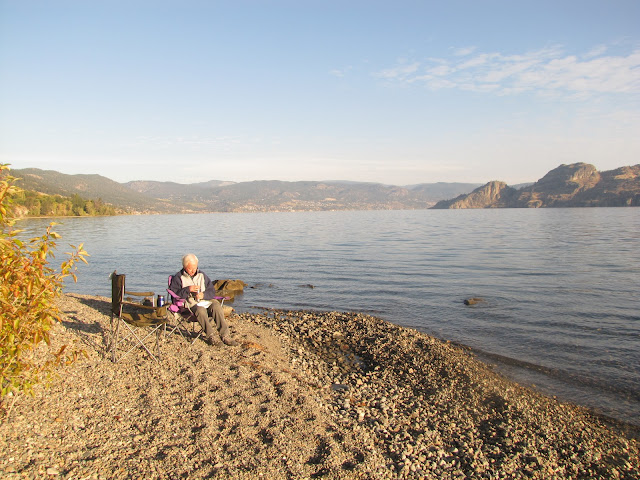 The duck was there for any handouts, but she didn't get any.  We're not mean, just figure wildlife shouldn't be fed by humans. 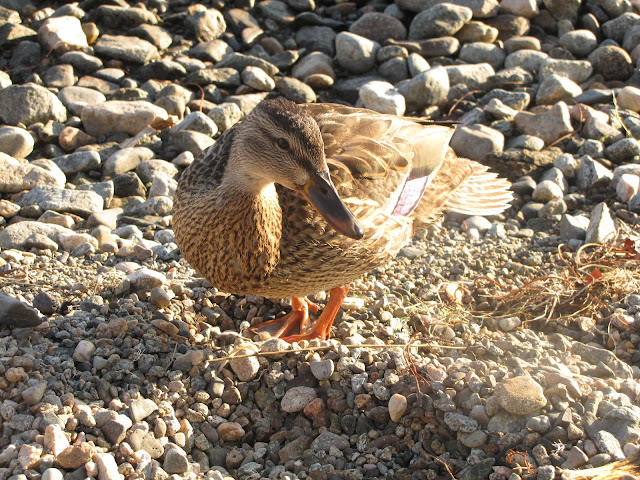 The campsite was being put into winter mode.  That meant the washrooms and showers were locked, and the water was shut off.  There were a few pit toilets, some with paper, some without.  That morning the parks guys came and were blowing the water lines out.  There were only about 6 or so campers in the campground.  At that point it was free, as they hadn't got the paper work for the winter rates set up.  Lucky us! 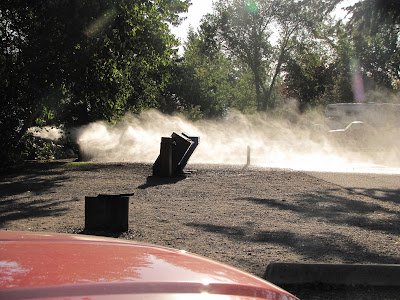 There was a great walking trail between the two campsites, and a pet beach along the way.
Are we there yet? 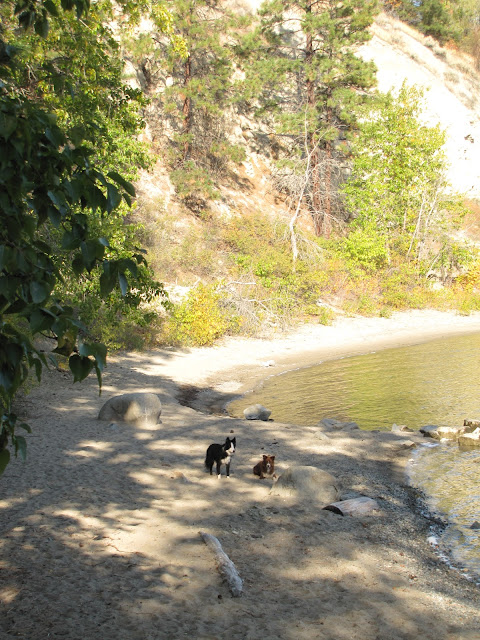 When we stopped for a swim, look who reappeared.  This is about 1/4 mile on from where she originally showed up. 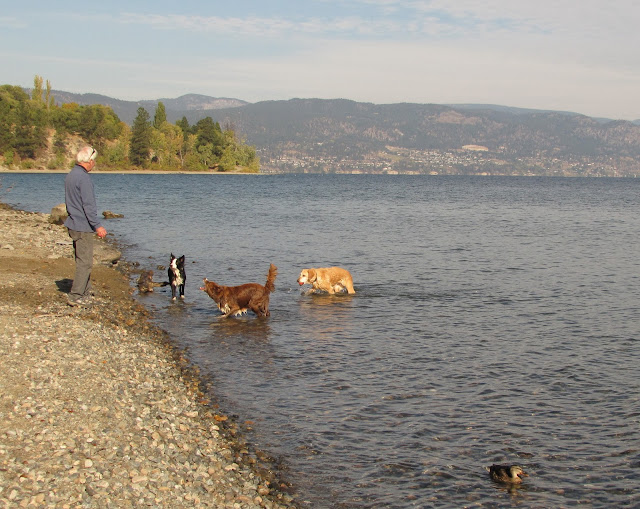 And here's a little education for you.  A different kind of 'groin'.
That was a new one on us. 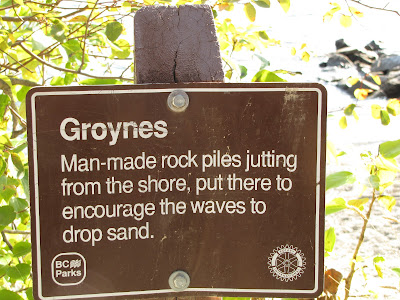 We walked along to the other campsite, wandered up the hill, and then found an upper trail heading back to our campsite.   Down/stays are handy in places like this. 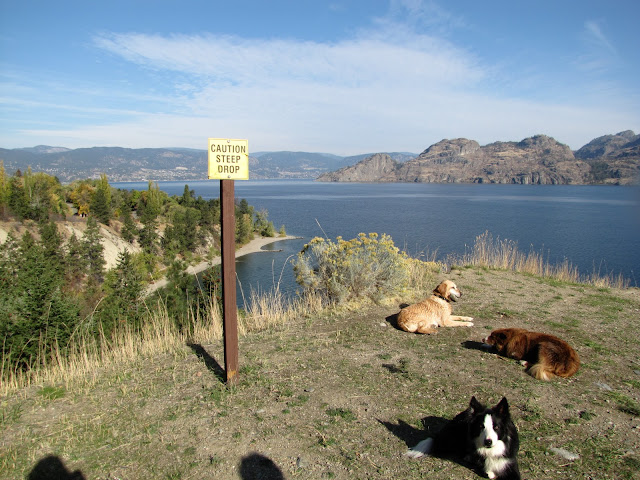 And just like some people, Calli likes to collect rocks from the different places she visits.  If we let her take them all home, we would have a rock garden by now. 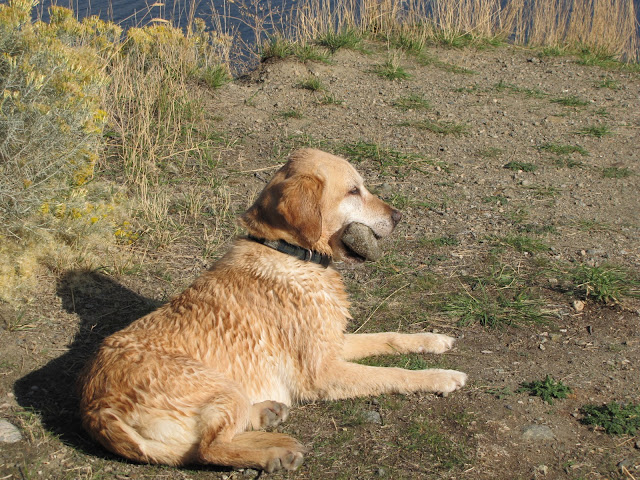 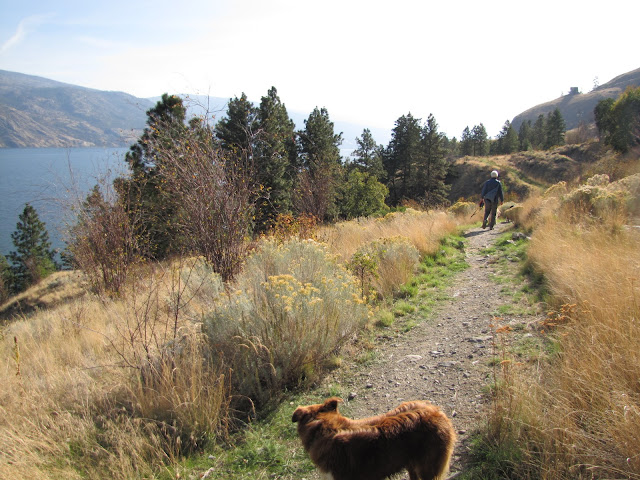 I think the most used command on this walk was 'wait'.  Luna had to be protected from her lack of fear and sense.  She seemed to think she was part mountain goat, so sometimes she was back on the leash. 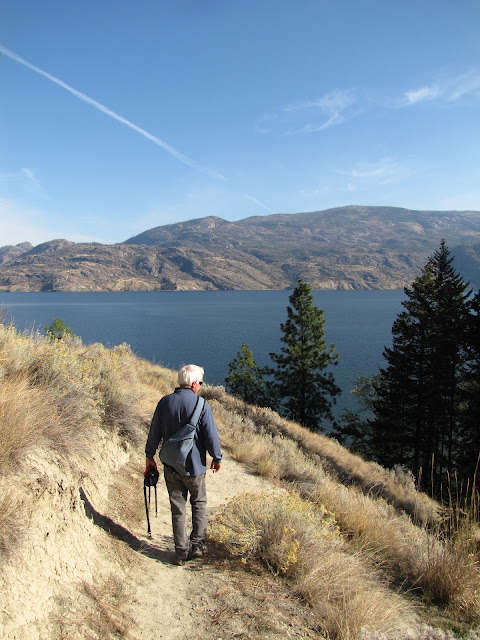 Halfway back down the hill. 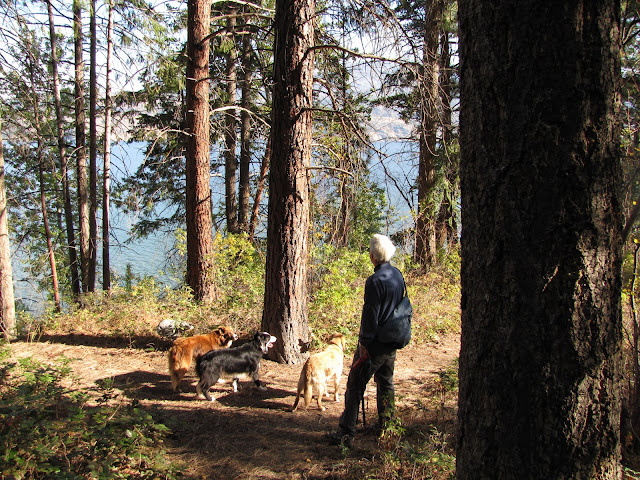 We packed up and moved out just after lunch, heading for Fintry campsite on the west side of Okanagan Lake, north of Kelowna.
Posted by Karen at 1:34 PM