After we left Ellison campsite, we headed south of Vernon to Kekuli Bay campsite on the side of Kalamalka Lake.
A relatively young campsite, it's been there 10 years, with not a lot of shade.  Lovely this time of year, but probably too hot for me there in the middle of summer.  That evening as the sun was setting, we took a walk around the nature trail mowed through the grass.  Down the middle of the trail there was lots of coyote poop with pieces of apple in it , from the orchards on the other side of the highway.  We heard them howl after dark.
That's our truck and trailer in the middle of the picture 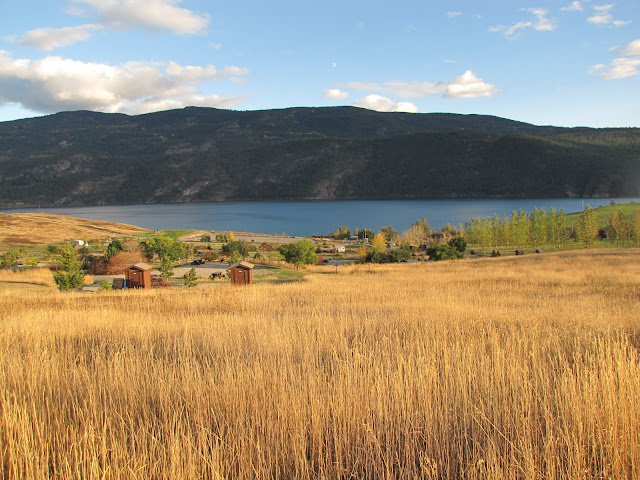 And after the sun went down. 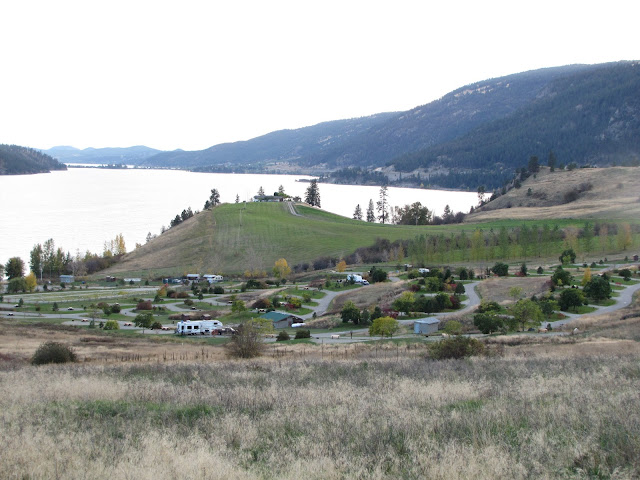 It got really cold that night, and that was the only time we attempted to use the furnace, which was not throwing out any heat.  Bummer!  We piled all our blankets on the bed, and were really happy when the sun came up the next morning. 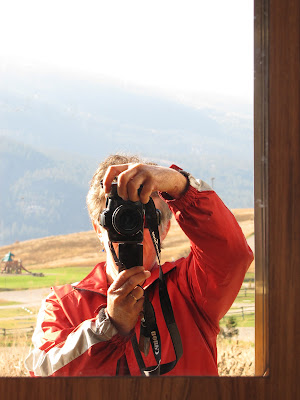 The showers there were still operating, and then after that we took the dogs down to the lake.  Not the best of beaches, but the dogs got a swim.
There were some shrubs loaded with rose hips in the campsite.  I was discreetly trying to pick some, since you're not supposed to be picking anything or removing anything from a park.  I got a pound or so, and am going to attempt some rose hip jelly.  I did try it once before with some small rose hips I picked around here, but it was a flop.
After stopping in Kelowna to visit some relatives at their lovely place in Gallagher's Canyon, we headed south and spent our last night at Okanagan Lake campsite, the same place we spent our first night.  This was a Saturday night, and the campsite was at least half full.  Wow!  We were still able to get a lakeside spot.  We couldn't figure out why a lot of the campers were farther back in, snuggled in against the hill, and these lovely lakeside spots were still open.  We sure found out the next morning.  The wind blowing off the lake was really wicked, we had our winter jackets on to keep warm.  We weren't interested in going to the beach at all, so took the trail back up the hill, and along the top part that we hadn't finished on our first visit. 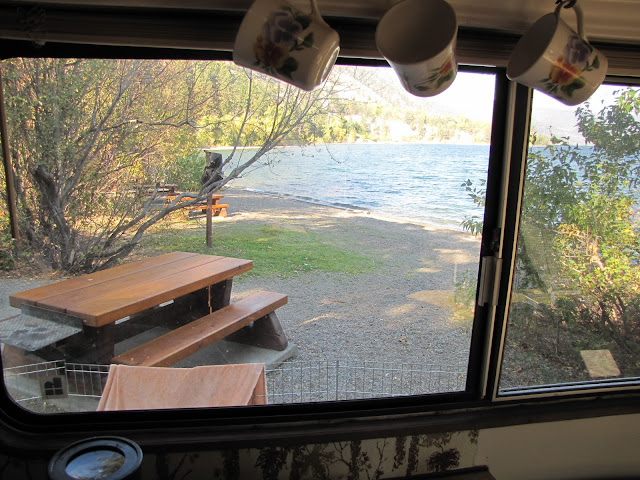 That's our trailer, the farthest out, just visible between the trees 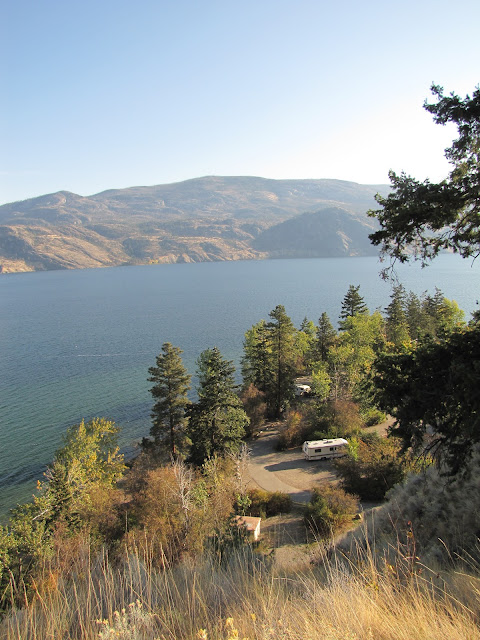 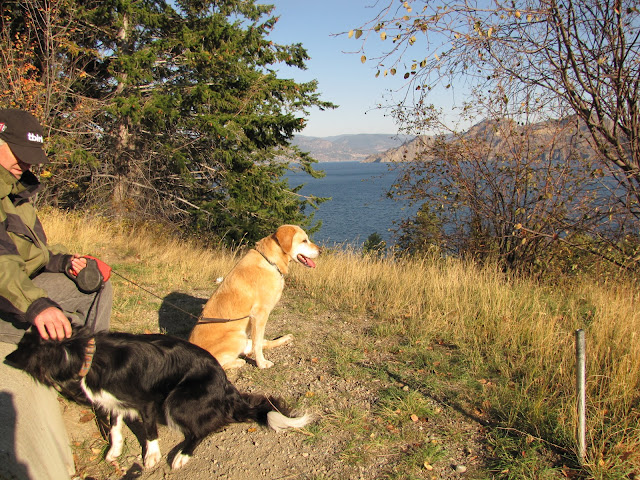 We didn't hang around for too long that morning.  Off we went, south through Penticton.  I was on the lookout for a fruit stand.  I can never decide which one to stop at though.  Larry said 'look there's one that says they have plums' (I needed plums as our trees had none this year).  ﻿ We were already past, so continued up the highway, turned into a gas station and then came back.  A feisty little Italian lady with a strong accent was running it.  They had plums, and concord grapes, and quince (that was a bonus, hadn't even thought of those).  I asked if they took debit or credit, as I didn't have much cash left.  I couldn't understand all she said, but the gist of it was that we would have to go back up the highway and get some cash from the gas station.  So off we went, got the cash, turned around at the gas station yet again, and bought lots of plums, grapes, quince and garlic.  Then back over that same stretch of road for the fifth time as we headed toward home.
We made a stop in Keremeos for some lunch and a walk for the dogs down to the Similkameen River there.  After Jake and Luna went in a few times, they started balking at getting their toys, and then we realized that the water was really icy.   Too late, I'd already thrown Luna's toy back in.  Luna and I ended up about 500 ft downstream, all the while I was encouraging her, and throwing rocks at the ball. She would walk out part way, and then wouldn't go any farther.  Kind of looked like how you and I feel when that cold water hits the crotch.....I could sympathise.  Finally she got brave enough and took those couple of extra steps to grab it. 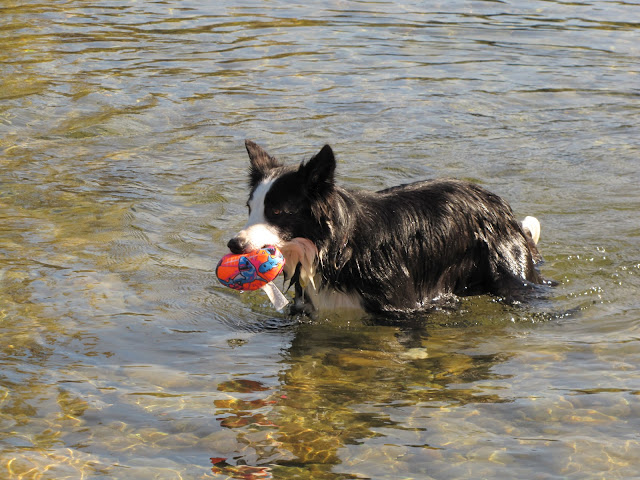 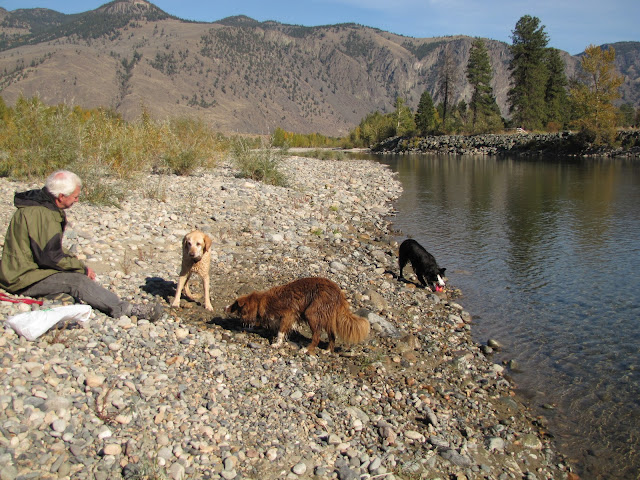 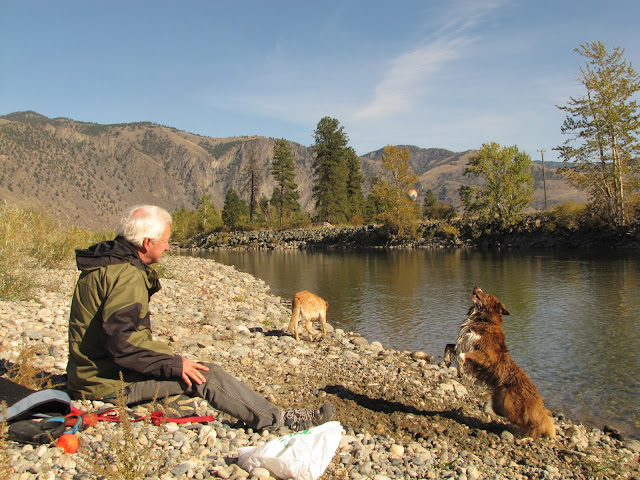 Back along Hwy 3.  Wow some of those hills seemed mighty steep on the way home.  Got home just before dark.
It was a fun trip, and the weather was just lovely for the time of year.  I love the light in the Fall and the changing trees.  The Okanagan can be really hot in the summer, so this was nice.  The only thing is that the days are really short, and it made for some long evenings in a little trailer.
And a bit of a 'Random act of Kindness' that came to it's conclusion tonight.  When were were eating our food from the A & W in Princeton, I noticed something on the ground under the picnic table.  It was a Surrey dog licence, with a 2011 sticker on the back.  I decided to take it with me.  Yesterday I called Surrey city hall, gave them the number on the tag, and they gave me a name and phone number. Actually, that shocked me.  I had expected them to contact the owner, and give them my phone number.  Anyway, got hold of the person, who hadn't even realized that her pup had lost his tag, but it had only been purchased in the last month.  She was thrilled that I had it, and when I offered to mail it to her, well she wanted to know how she could pay for it.  I said I wasn't worried about the price of a stamp.....When she gave me the address, it was close to White Rock, and I said I'd just drop it off, as I was there all the time.  Did that tonight, and she was so happy, which made me feel really happy, and it was just a feel good situation all round:)
Posted by Karen at 12:37 AM