We headed up the highway, and after making a detour half way up a mountainside when we made a wrong turn, we finally saw the sign for Fintry campsite .  We turned off the highway and headed up Westside Road.   It was 34 km of a winding, very narrow in spots, road.  Quite a bit of the time there was a steep drop off on my side, with next to no gravel shoulder.  I was keeping my eye on the trailer in the rear view mirror, and I commented that ya know, if that trailer wheel drops over the edge, the truck will be going with it.  Pretty nerve wracking in a few spots.  So we get to the turnoff, and there is a Closed sign slapped over the campsite sign.  I was choked.  We drove down the steep hill to the campsite anyway, and sure enough the gate was locked.  There were houses nearby, and a guy rode by on his bike.  He said it had closed the last weekend.  The website had said it was open to October 15th in one spot, and to Oct 31st in another.  A publication we had said it was open to Oct 25.  Granted, it was now Oct 14th, but it should have been open at least for that night.  What really made me mad though was that they hadn't bothered to post a 'Closed' out on the highway sign, 34 winding, scary kilometres back.  We parked on the road, and took the dogs for a walk.  It was an old farm site with quite an interesting history.  We didn't see a soul.  After some discussion we decided to continue on up that side of the lake, and try for Ellison campsite.  Thankfully the second half of the road was better than the first.
When we pulled into Ellison, it was a relief to see that it was open.  The shower building was still operating, and there were a couple of other trailers in the park.  A crowd! 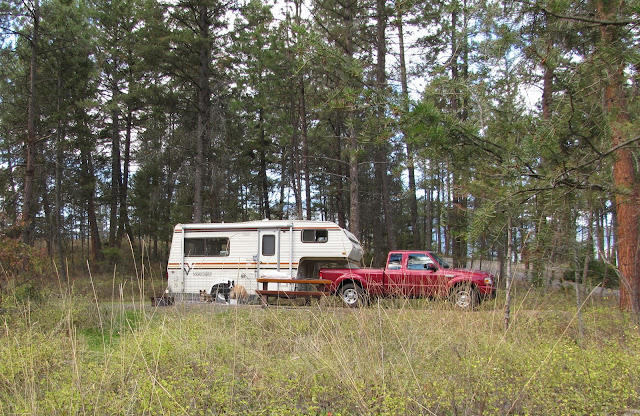 One of the disadvantages of camping at this time of the year is that the days are so short. By 7pm it was fully dark. We made sure we got our money's worth by heading for a shower, and it helped to pass the time. During the night the wind picked up. We were in a bit of a bowl below the cliff edge, so most of the time we seemed to be out of the wind, but every once in a while a big gust would come through, and rattle the awning that was out. Jake doesn't like the wind, and he was 'worried'. One of the dogs was growling at the weird noises the awning was making occasionally. I was wide awake, and to tell you the truth, it was a bit creepy. I was hoping no trees were going to fall on us. Another big gust came through, the awning made a big bang, and when I peered out I could see it hanging loosely. Either that, or me suddenly talking to him woke Larry up, and there we were at 1:30 in the morning, out in the kind of creepy darkness rolling the awning back up. No damage was done, and the weird noises stopped, and Jake settled down a bit. It had clouded over the afternoon before, and a few drops of rain came down during the night, but the next morning it cleared off and turned sunny again.
In the morning we took the dogs down to the grassy area by the play ground, got out the soccer ball and toys for Calli and Luna, and had a game of soccer and of  'fetch'.
That's one thing about this time of year, there's no one around, and we took the opportunity to be a little more lax with the 'dogs must be on leash' rules.  It's not like they are running around out of control anyway. 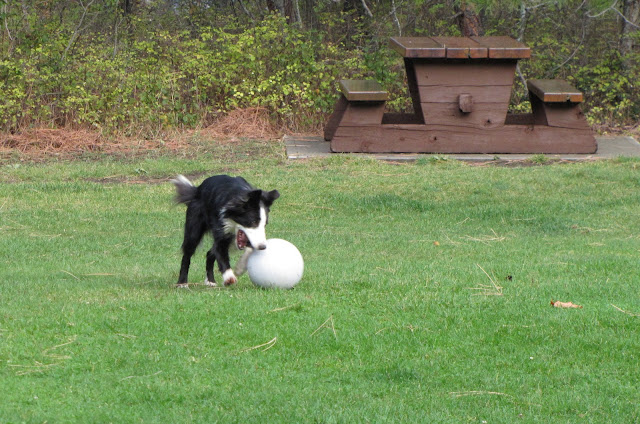 After that we took a walk up the nature trail.  We got up pretty high, and could see across the lake.  Our trailer is somewhere in the trees just out of the picture on the right.  That mountain in the center has a fresh dusting of snow.
See that bald spot in the middle?  Well to the right of that is Fintry Park, where we had wanted to be. 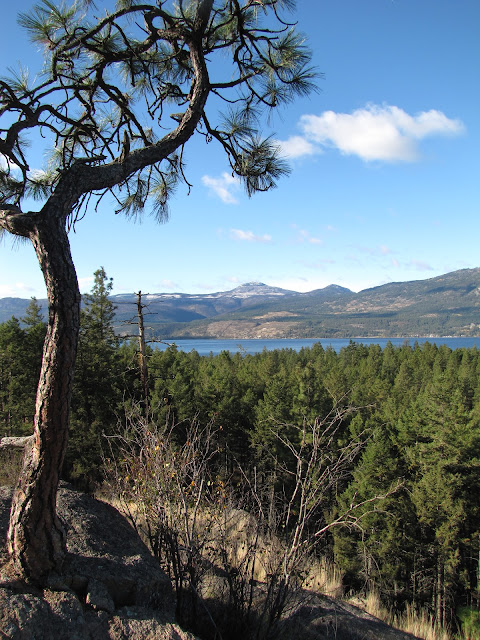 All those brighter green cottonwoods along the water are in the park.  What you can't see from this angle are the large hay fields behind the trees. 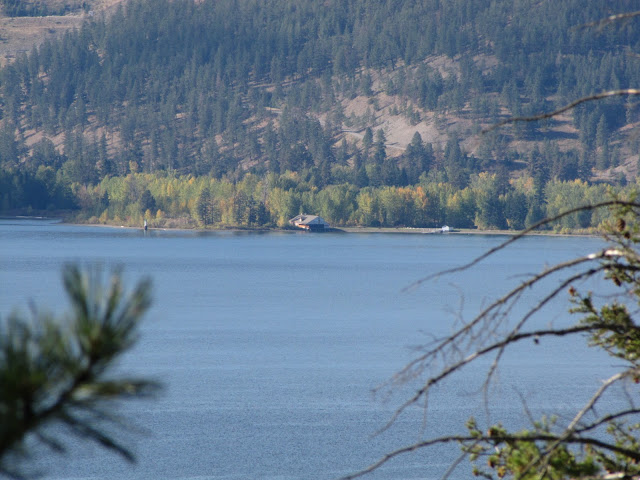 After lunch we hiked down to the pet beach.  There are a lot of rocky cliffs all around the edge of the lake.  The beach was great, lots of sand and water was still relatively warm. 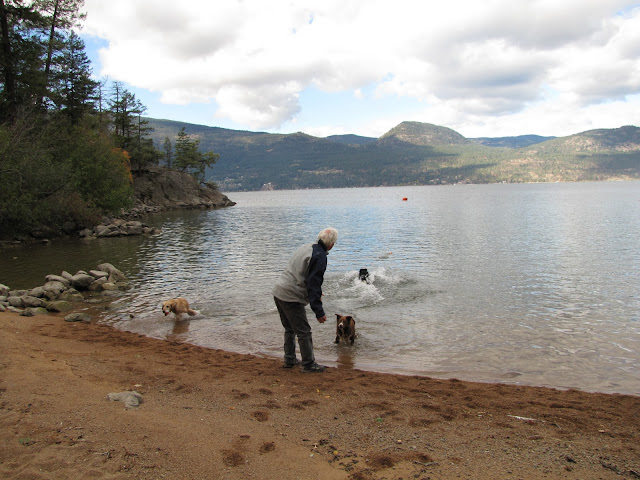 And look, there were groynes there too!  Across the bay was the people beach, and it had the same kind of red sand.  The dogs had a great time. 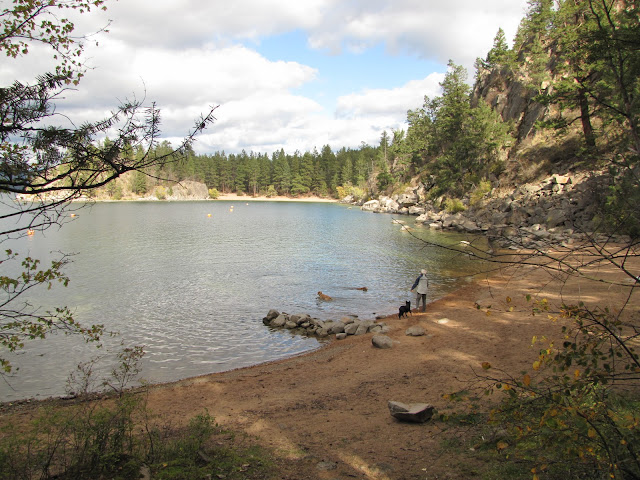 After we had figured they had swum enough, we just let the dogs play around on the beach.  Jake doesn't play alone, he has to have someone throwing something for him.  Luna can amuse herself, and it was quite hilarious watching her.  Calli likes finding a rock, the bigger the better, and she will then put it down, dig a hole which the rock falls into.  She eventually rescues the rock, and starts the process all over again.  She only does this with rocks though, never toys.  You will notice here how her back legs don't participate.  They don't bear much of her weight, and can't move backwards, so when she is past her balance point, her back end just goes down.  You can read about her accident in Calli's Story .  We have found that when we go away on holiday, her back end becomes weaker.  Not sure why, maybe because her routine changes, she gets more exercise on consecutive days, who knows.  Her right hip is the weakest, so she starts collapsing to that side, and by the fourth day out she was pretty bad.  Not so much when she was loose doing her own thing, but walks became an issue.  Running the leash between her front legs, past her right hip and under her tail helps, as it puts a bit of pressure on that side and helps to support it, but by the end we were using her tail as a handle to keep her back end up.  I did make a harness when she was first hurt, and have since loaned it out to a friend.  I'll have to see about getting it back for times like this.
She does enjoy playing in the sand though!
And here's Luna
And Google has just informed me I've used up my 1 GB of free photo storage space, so now I'm going to have to pay! Who'd a thunk it:)  Well I think I can afford the $5 a year they want to charge me for 20 GB.
.
Posted by Karen at 10:32 AM