All those flowers that I talked about in my previous post were picked by Saturday evening.  For some reason I always have a hard time getting myself started on making the bouquets ready for the farmers market.  After getting everthing but the greens picked, and then us taking the dogs on a quick, almost in the dark walk, just 'a little sit down', it was after 10:30pm by the time I got going:(  Larry carried the little old tv down to the garage, set it up on the freezer with a wire hanging off one of the rabbit ears to give me half decent reception, and I got started.  The TV is a new thing, just something I'm trying to break the boredom.
It was slow going, I just seemed to have a hard time getting the bouquets to look 'right'.  That happens sometimes when you have a lot of one type of flower (phlox), but not enough of others for contrast.  Anyway, 14 'country bouquets' done, and I got to bed just before 1:30am, yuk.  Yeah, that alarm at 6 am was not what I wanted to hear.  Actually though, I was awake before that, but when that alarm goes, we really need to leap out of bed right away.
We did our usual morning stuff, Larry dealing with the other animals, loading the truck, etc, while I picked the salad greens, basil and arugula.  Stopped on the way to White Rock and quickly walked the dogs at the tree farm.  I pointed out to Larry where I had seen the snake last week, and there was it's shed skin!
We got to the market and got set up, and we had people lining up in front of our booth before 9 am.  By the time we opened, we had quite a line up (talk about an ego booster!) and then people just went crazy with the flowers.  So there is this long lineup, just about every person is holding a bouquet, and some of them two, and they are picking up bags of greens as they move past them.  I wished after I had made everyone wait while I took a few pictures.  I am busy wrapping bouquets in newspaper and by the time I came up for air, 13 of the 14 bouquets were gone!  Wow:)
Anyway, it was a good day at the market.  Cloudy and cool there yet again, but the sun did come out after it was over.  Great entertainment, a group of young people singing, really enjoyable.
Then off to visit our mothers as usual.  Since we are going to be away next week, and I wouldn't be here for my mum's birthday, we took her out for supper.
The dogs spend nearly six hours at the market, with a short play time and pee break at the end.  Then we go for lunch with a friend, and back in the truck they go.  Then some time in my mum's small back yard.  Then back in the truck while we went out for supper.  Calli, and probably Jake, would probably be fine left in her back yard, as we have done that before.  I would be a bit more concerned about Luna, as if something scared her, I think she might attempt to get out.  She was a little worried about some kids running back and forth along the fence behind my mum's and then if someone started pounding something, or started a weadeater up, she would be looking for an escape.  So better safe than sorry.
On the way home we gave them a treat and stopped at an off leash area at Campbell Valley Park, and had it to ourselves. Another photo session in dimming light, which makes it hard to decent pictures of moving things. 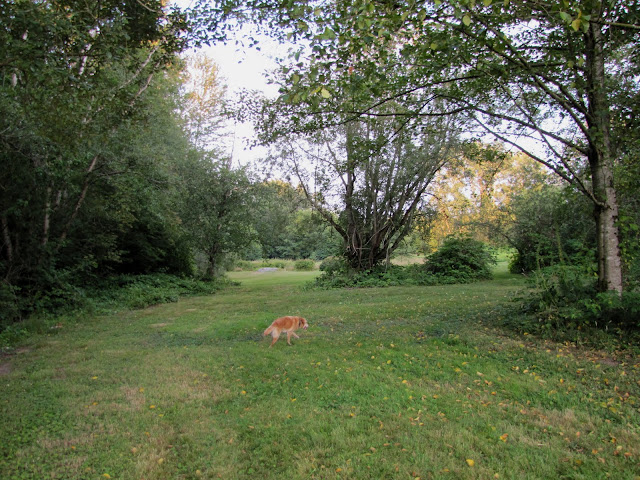 The dogs were doing doggy things, but it doesn't take long before Jake starts looking for something for us to throw.  Calli and Luna do more sniffing.  Jake had rummaged around in the bushes and found a stick that he was hoping we would throw, but we ignored him.
But then he lucked out and found an abandoned, split ball.
Come on Larry, ya know you want to! 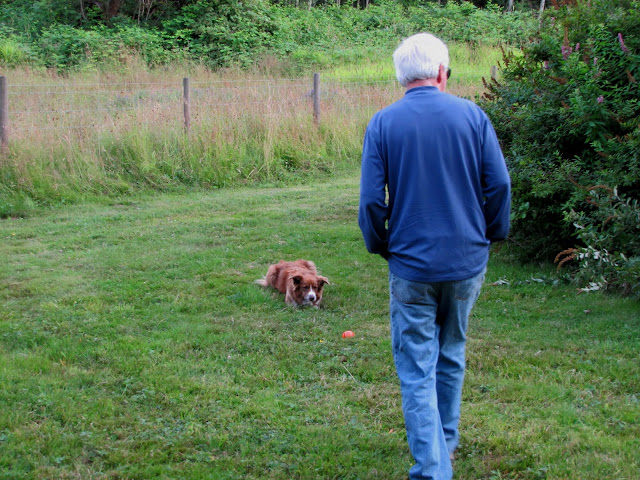 And Larry got sucked in.  And Luna, a party gal that might not initiate the party, but doesn't want to miss one if someone else starts it, joined in. 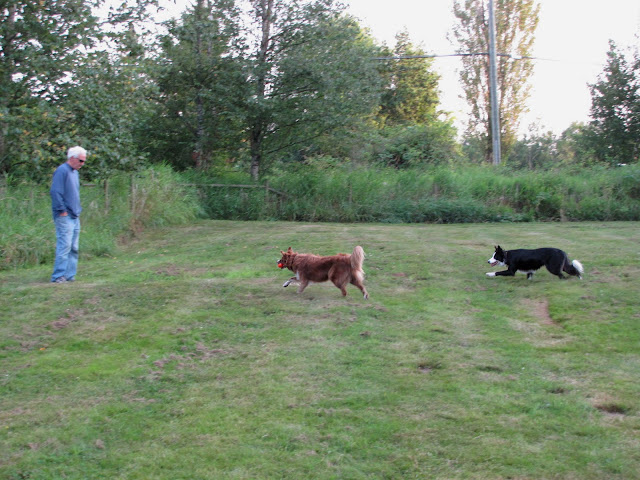 And some times she got the ball 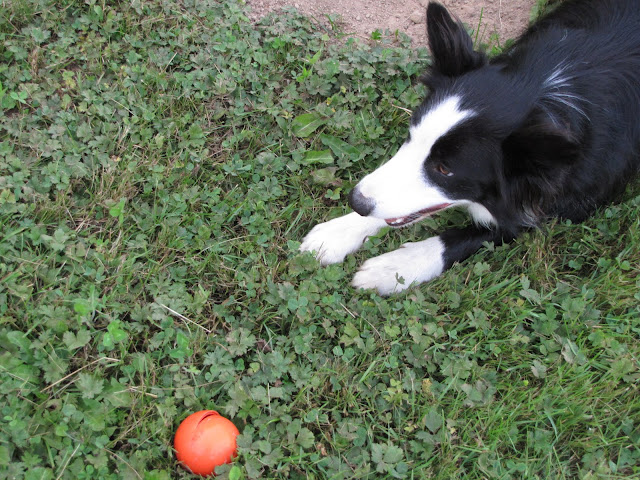 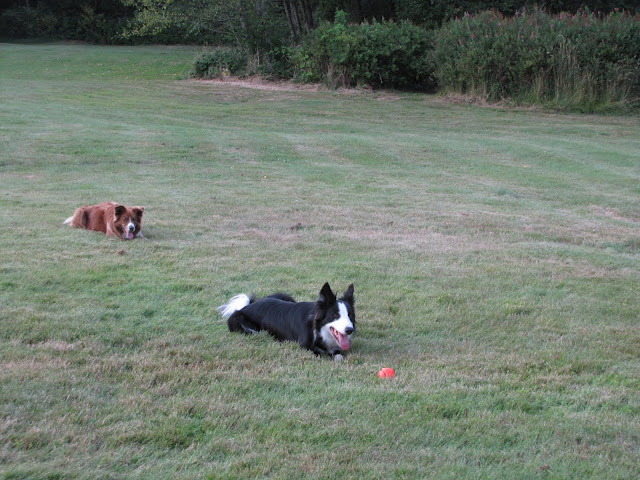 And then led Jake on a merry goose border collie chase 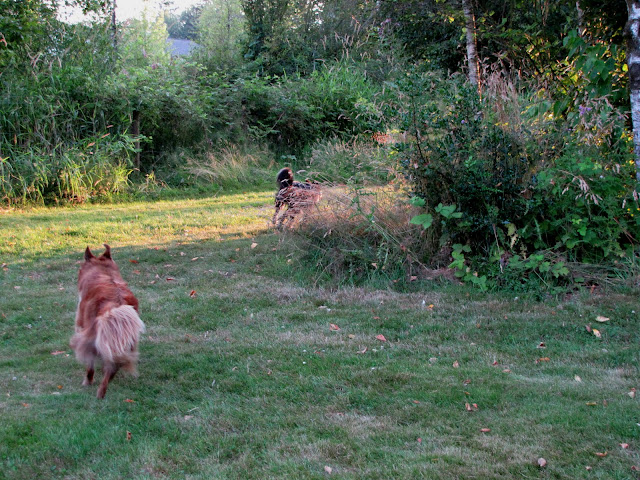 And one time Calli grabbed it!  She looked so pleased with herself, but then she dropped it a few seconds later.  If we are playing fetch with the chuck-it, this is the ONLY type of ball she will fetch, and she gets as excited as Jake and Luna 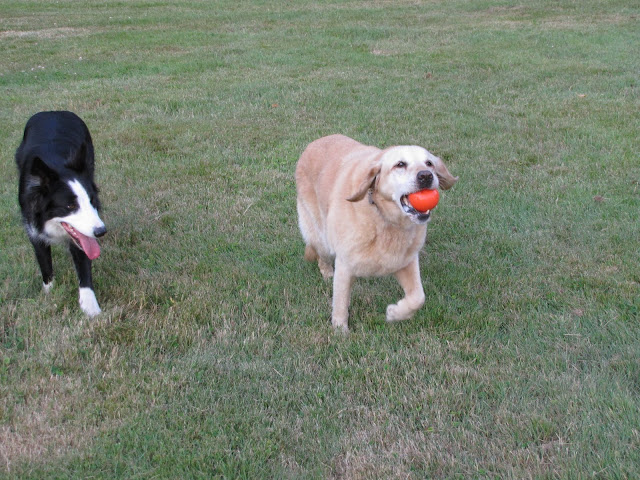 Overhead the sea gulls headed back to the coast and into the sunset. 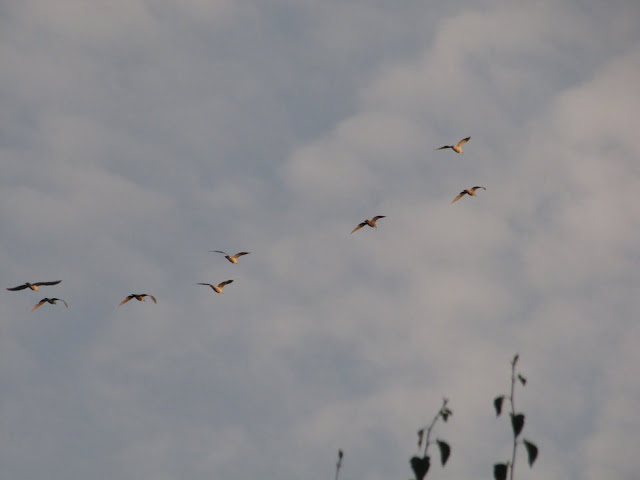 And Jake was victorious in the end, but we made him leave the ball behind:( 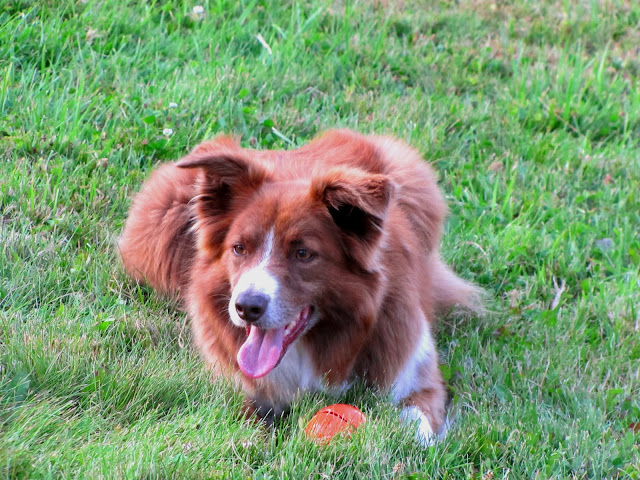