The other day we had to head in to the big city for our annual  talk with our Financial Guy, to make sure that our millions are invested to their best advantage.  I was never that thrilled about going, a long drive, a lot of slow traffic, I quite often seemed to come up with a reason why Larry could just go on his own.
This time it was actually planned for the same day that I was taking my mother to her rheumatologist, a kill two birds with one stone kind of trip.  Anyway, the rheumatologist visit got cancelled, which made the drive in much easier, since we didn't have to make a big detour to pick up my mother.  I suggested we take our bikes.  When we had been in Vancouver for the Olympics we had thought how nice it would be to have ridden our bikes along the seawall.
Of course the bikes weren't just ready to go.  Helmets had to be found, and then I wanted to find a visor for Larry's helmet, which would make him look not quite so dorky (after all, I was the one that had to look at him).  We knew that 'somewhere' we had a box with 'bike stuff'.  After a lot of searching, checking high shelves in the garage, I had a eureka moment and found it out in the barn.  The visor was attached, sort of, with some velcro.  The bikes needed some oiling, and the hitch had to be figured out and put on the truck.  It all takes so MUCH time.
We left a few minutes later than we had planned, which is par for the course if I'm involved.  Luckily, despite the freeway being one long construction zone, traffic went fairly well, and and hour and 5 minutes later we were there, and on time.
The financial meeting went quite well.  In fact we spent half of it talking about dogs.  Financial Guy's family had adopted a year old weimeraner in the last year, and he was telling us how he would never have thought that he could be so in love with a dog:)  He told us where we could get on the seawall, or the general area at least.  We parked just off Burrard and headed east to pick up the seawall just after Granville Island.
Lots of stuff in the news lately about bike lanes in Vancouver.  Holy cow, we felt we were risking life and limb when we were on the roads with traffic.  Despite us having the right of way at a couple of intersections, we had to have our wits about us or we would have been plastered on some one's grill.  A couple of drivers were just clueless, and had to come to a screeching halt.
Our entrance to the seawall involved bumping the bikes down some long flights of steps.  I'm sure there was an easier access close by, but at that point we could see the seawall, and wanted to be on it, and there were only the steps separating us from it.
It was one of the hottest days of the year (33-34 degrees in Abbotsford) but we knew by the water it would be about 8 degrees cooler, with a nice sea breeze.  We got going for a bit, and then remembered that we had forgot to put sunscreen on. 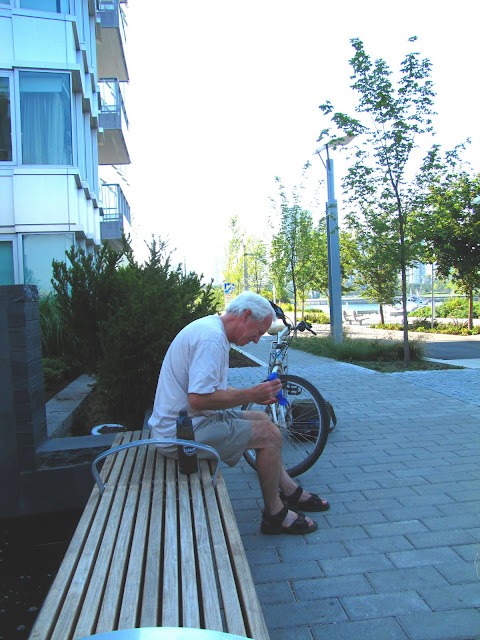 Just past Science World at the end of False Creek, were the colourful tents of Cirque de Soleil 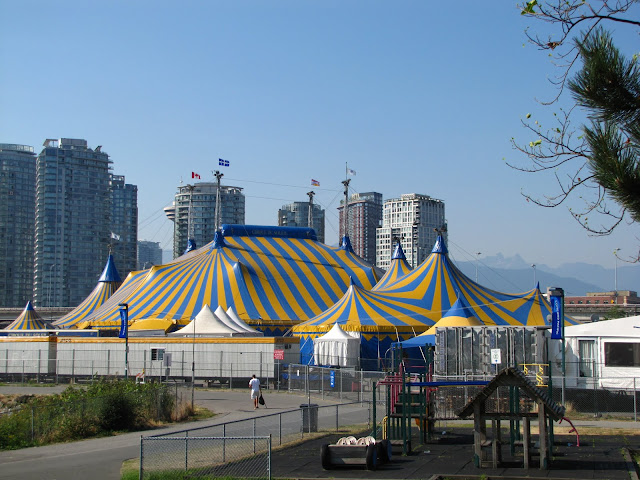 People were at the beach.  I hadn't realized that there was so much beach area along English Bay.  That's what happens when the only time you come through that area is by car, and you miss so much.  Vancouver really is a beautiful place. 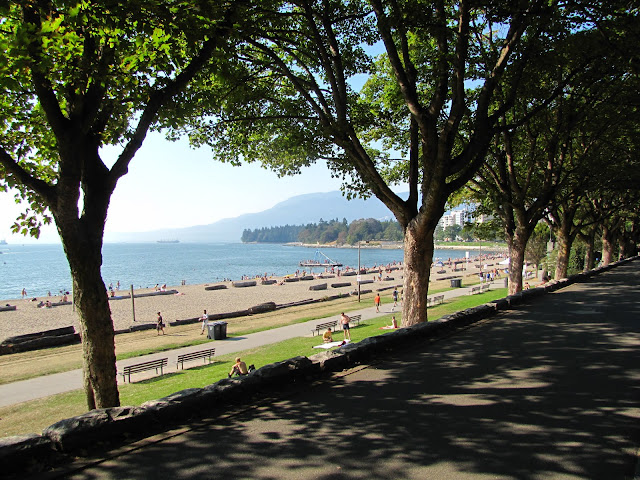 We eventually figured out that you could only ride around Stanley Park counter clockwise, so we had to backtrack a little bit.  I got pretty tricky, and started taking pictures while still riding the bike. 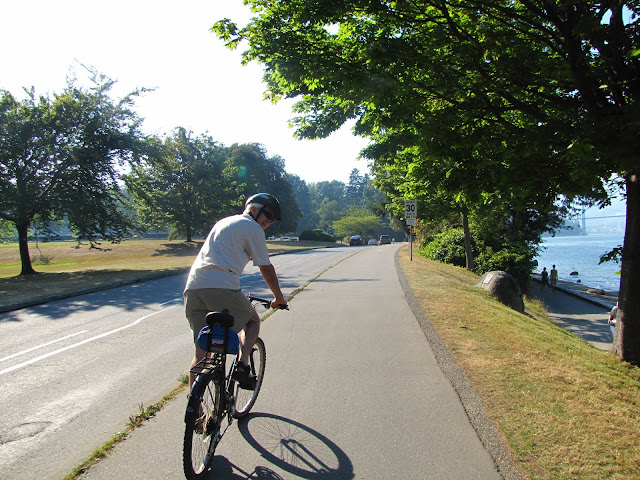 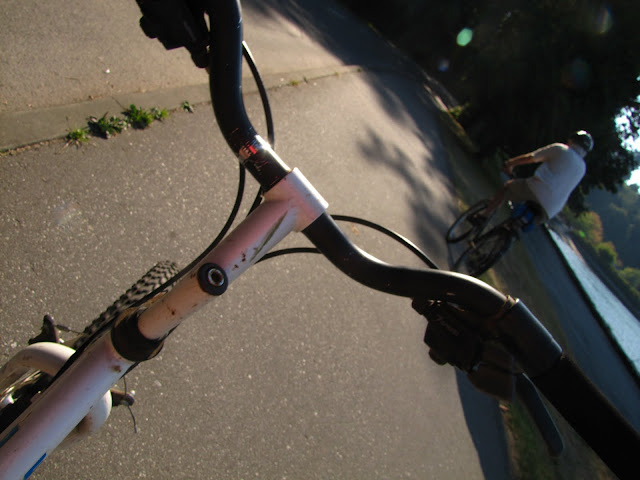 I told Larry that if he heard a loud crash, to just keep on riding.  Then he wouldn't feel so embarrassed at being associated with an out of control bike riding photographer.
We had to walk in a few spots were we shared the pavement with pedestrians, but not for too long. 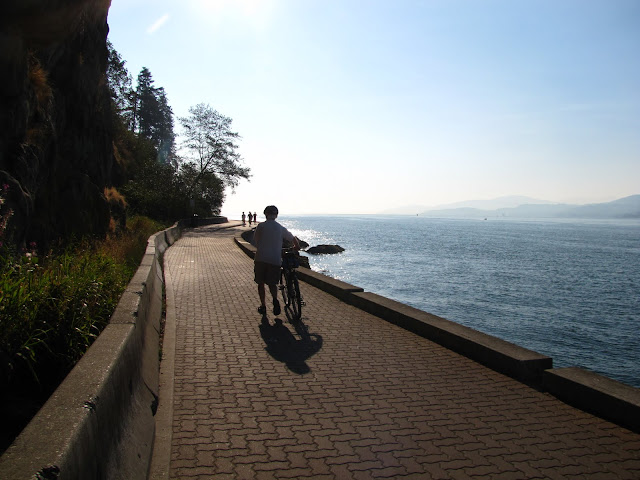 The west end of Stanley Park, and Siwash Rock 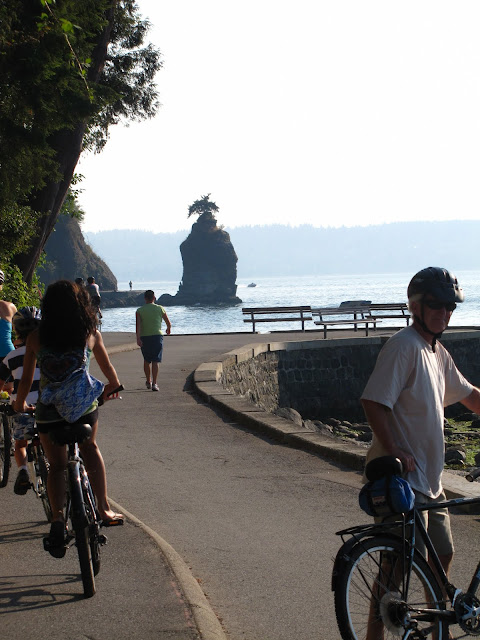 We did stop and sit by the beach and eat a hot dog from a vendor cart.  It was pretty good, with lots of onions:)
And  2 3/4 hours later we were back at the truck.  On the last leg we took a shortcut and came over the much disputed bike lane on the Burrard bridge.  Seemed great to us.
Note to self --- Time to invest in a much wider, well padded bike seat 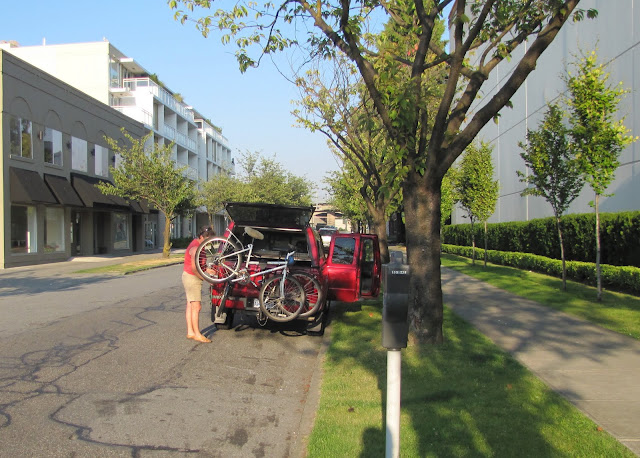