Sunday morning came around too fast, and I almost slept in!  My cell phone is so ancient that it doesn't seem to have an alarm, or I couldn't find one anyway.  I usually wake early, so didn't think it was going to be a problem, but I guess I kept dozing off, and it was the PA system that woke me up.  Just threw on some clothes and headed off to the walk through.  This time I figured there would be no problem as probably the running order would be reversed the second day, which it was, and Jake was the 9th to last dog in, so at least 2 1/2 hours between him and the first dog.   Larry walked them and got them fed and brought them down to the shade tents before 8.
The first run was Gamblers.  Lots of points available in the opening, Jake got 49, compared to 36 the day before.  A do-able gamble.  Larry was stood in the corner filming, and guess who Jake saw/smelled as we were going around:(  I also swear he wasted some time looking at Larry in the closing, but the video only shows a quick glance.  Funny how things, when you are running, seem to take up valuable time, and yet when you see it on video, it is almost unnoticeable.  Anyway, the gamble didn't quite play out as I envisioned it, but he did it....or did he?

Well the judge gave the thumbs up for the gamble, but....the buzzer went before he broke the light barrier.  People on the sidelines thought it was all good.  But, if you noticed my reaction at the end, I KNEW!  That timing beam had to be broken before the time ran out, and because I heard the buzzer, I knew it hadn't been.  Damn!
Yep, .02 of a freaking second over time,  which meant we didn't get the 35 bonus points.  Bummer:(
Larry said after that lots of times he thinks about which way the wind is blowing when he is standing watching, but didn't this time.  I had noticed the whole weekend that Jake seemed to want to know where we both were, in fact all three dogs were quite concerned if one of us headed off without them, well other than when they were in the shade tent.
So next up was Standard.  I seemed to have a total memory lapse where Jake crossed back into the first tunnel, did a late front cross and got a refusal there because he had already crossed the plane of the tunnel mouth before going into it.  The rest was okay until.....
Yep, here we go again, just like Regionals.  Watching that video, it almost makes me think that he thinks it is the teeter, and is trying to make it tip (just looking at his body position), and then bailing because it won't.  What I don't understand is that he is right at the top, and would have been able to see the top plank extending out, so should have realized that it was the dogwalk.  My first thoughts were that it had some weird vibration at that point, and he is very movement sensitive....but I don't really know, and if anyone has any thoughts, I'd love to hear them.  He had actually been over that dogwalk the day before in the other Standard run, but would have been coming from the other direction.  I did hear that a couple of other dogs coming after him, slightly bigger dogs than Jake, did react a bit weirdly at that same point.  Some people have said that they think this particular brand of equipment is a bit flimsy.  Who knows, but very frustrating.  I had already decided that after two attempts, we would just move on, and of course racked up multiple penalty points there.
And I did fall apart after that run, yep, shed some tears, and took off by myself down to the off-leash to play with Jake.  If someone had come up to me right after that run and commiserated with me, I would have been a total blubbering basket case.   One thing I never feel is any anger at Jake, he does the best he can, and I can't ask any more than that.  I do feel frustrated, just at the whole situation, but never 'blame' the dog.
So it was just about the end of the day.  One last chance.  By that point I had no great expectations, in a way I just wanted it to be over.  The final Jumpers run.
Larry had decided that it would be best if he was right there at the gate with me, so that Jake KNEW where he was.  So I went in, and then had to wait quite a while for the ring crew to raise all the jump heights, as Jake was the first 22" dog to go in.  One thing I can say is that he has a GREAT start line stay.  And notice how he does one last check in with Larry:)
Oops, forgot to trim that video, and the 'Nationalas' spelling mistake at the top of it will irk me, but I'm too lazy to go back and redo the whole process.
But, but.....YAY!  A clean run!  And in the end we placed 7th in that Jumpers run out of 25 dogs, and got a lovely rosette.
You don't know how nice it was to finish up on a really positive note:)
Good boy, Jake! 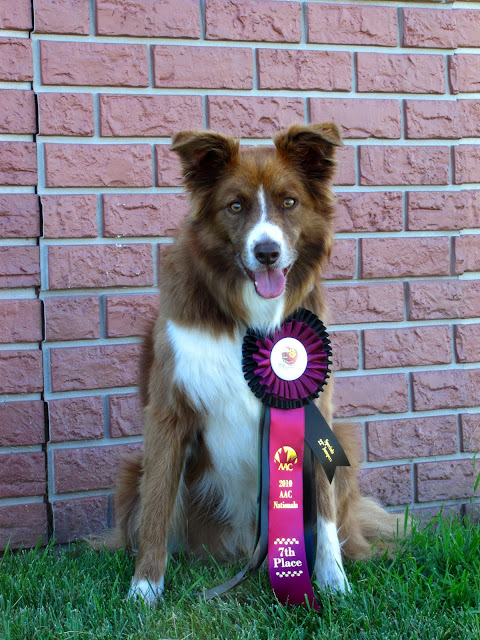 And here's some of Susan Garrett's runs.  For those of you who don't know of her, she makes her living from all things agility, and she and her dogs are some of the top agility teams in the world.
The dogs actually seemed much faster in real life.
I'm stood watching behind the back right corner of the ring in the steeplechase run (black tank with my arms crossed) 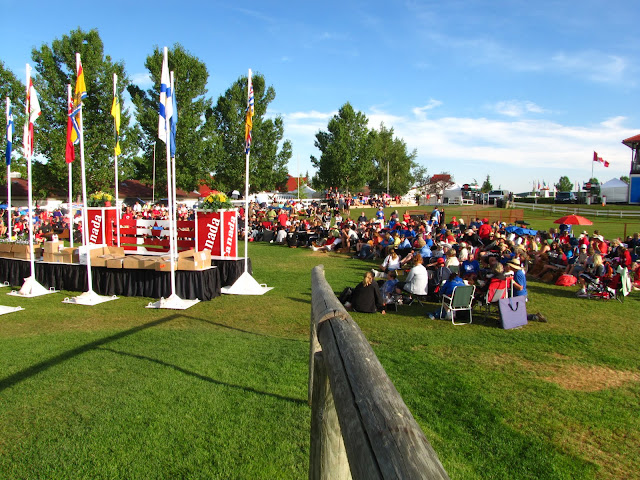 Earlier in the afternoon we had strolled past the vendor booths.  A ton of doggy stuff to spend your money on.
I got a kick out of this sign.  Maybe something we should have on our gate, considering  how our Luna(tic) can be... 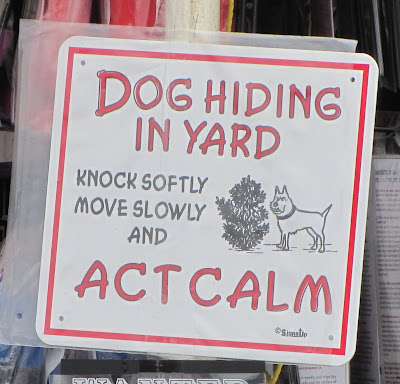 Finally all the awards were announced.  Christine and Kozmo had placed 3rd overall in their division, and got a huge rosette:)
Sunday was also our 29th wedding anniversary, congrats to us I guess!
And you know what was really the most amazing thing about the whole event.  There was a lady there, Shirley, who was 81 years old, and she ran three dogs.  So that meant she ran 9 runs each day (Sat and Sun), plus she made it to the steeplechase final on Saturday, so make that 10 runs on Saturday, after running some steeplechase on Friday.  A lot of people were saying that they want to grow up and be like Shirley:)  And she placed 9th, 14th and 17th in the dog's respective groups.  Wow!
And if you like to play around with numbers, like me....
Well if this had been Regionals, Jake wouldn't even have got enough points to qualify for Nationals, but if he got the points at Nationals that he did at Regionals, he would have finished 10th at Nationals, and just squeaked for the last of one of those big rosettes:)  A whole bunch of 'what ifs':)
Posted by Karen at 5:35 PM