Hay, Let's go for a swim

Right now my life seems to consist of fruit.  Picking it, freezing it, making jam out of it.  Blackberries are at their peak right now, and I try to pick a bucket or two most mornings.  Yesterday I didn't.  I need to make so much jam this week that I figured I had better forgo the picking and just get jamming.  So six batches later, I packed it in.  Each batch makes about 12-15 cups, so that is a lot of jam.
In the meantime, Larry is dealing with hay.  Yep, we ended up with enough grass that we could do a second cut.  Not that we wanted to, but what do you do.  We had figured that we would be baling today, but then the weather forecast decided to change from sunny, to cloudy with 60 % chance of showers.  Fortunately Tuesday and Wednesday were hot enough that we were able to get the hay dry enough to bale yesterday.  After my long story last time about our hay escapades, I'll just keep it simple and say that this time went much better.  I did keep out of the way though.
When I was finished the jam and the baling was happening, I disappeared down to the dyke with the dogs.  I decided to go to the south and see if anything was left of the long pool of water there.
As soon as we get to the dyke, Jake heads off to the usual waterhole, which is to the north, so I had to call him back.  As we head south he does the same thing.  And where he goes, Luna usually follows.  With Jake, it's all about getting to the water, because he knows that is where the toy gets thrown. This is taken with the zoom, so Calli is somewhere inbetween in no man's land, and Jake and Luna are a lot farther away than they appear. 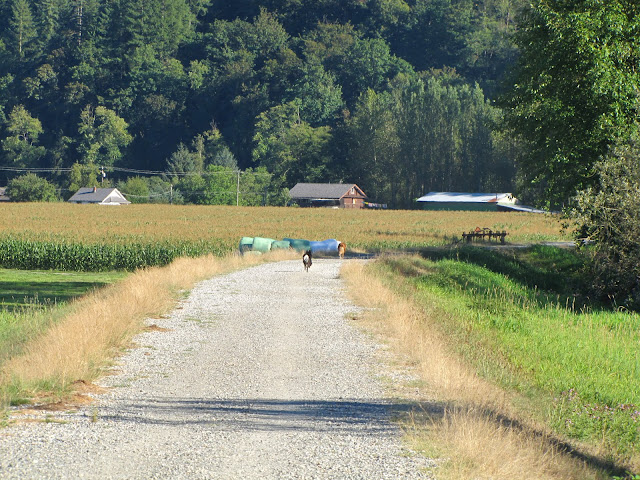 Jake has a pretty good recall, and Luna's is decent, so I get a kick out of letting them get way ahead and then calling them back.  Must be that mean streak in me:)  The first time I called, he stopped and looked back, and then kept going.  I decided that them running on the gravel was making enough noise that he couldn't really hear me.   The second time I called, they stopped again, and then I called them again right away, and this is what I got:)
Who doesn't love to see their dogs racing back towards them:)?
You rang? 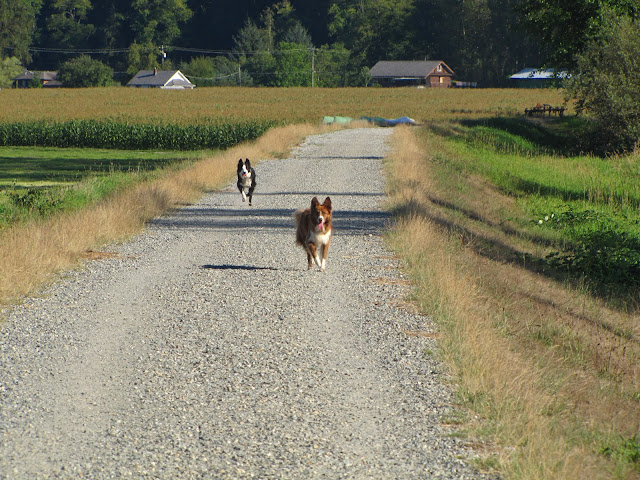 Courtesy of some beavers downstream..... 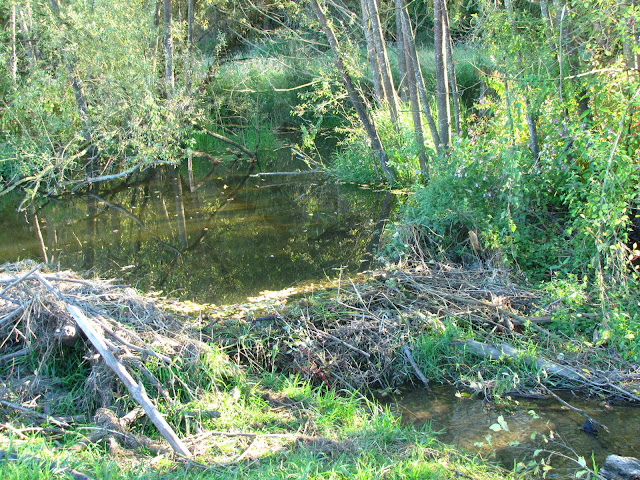 ...there was a good pool of water for swimming.  It was great for me too, I could stand in the shade.  I tried a few things with the camera, that didn't work out, so not many pictures. 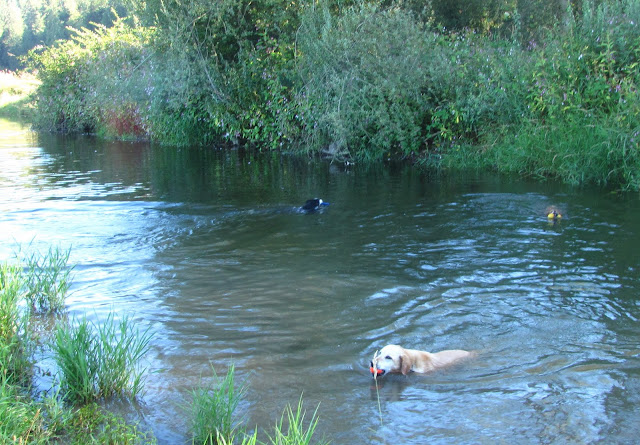 Jake is vocal and persistant, and...well...sort of annoying:(  He wants you to be a non stop throwing machine. 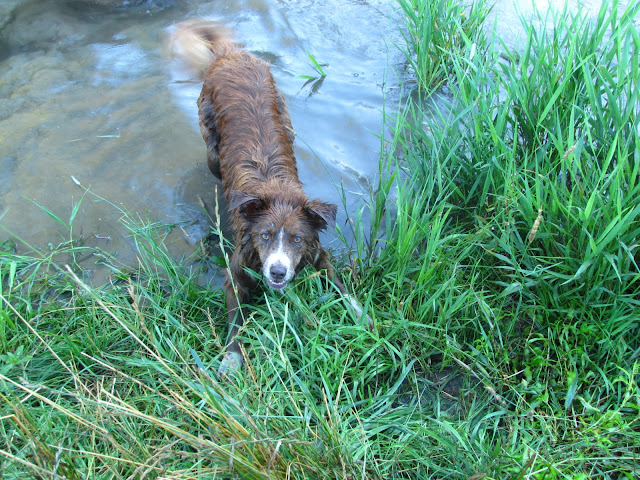 And it was all going well until Calli chomped her orange street hockey ball too many times, and it got a big split in it.  I threw it, and it sank.  Calli was royally p*ssed off.  She swam in circles, and she stared out at the water, and she barked at me. 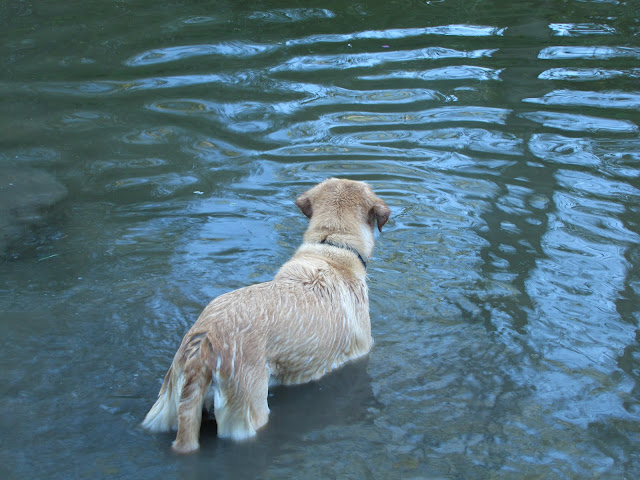 With a *LOT* of encouragement she did deign to retrieve Luna's toy one time, but it's just not the same.  She is a one toy kind of gal. 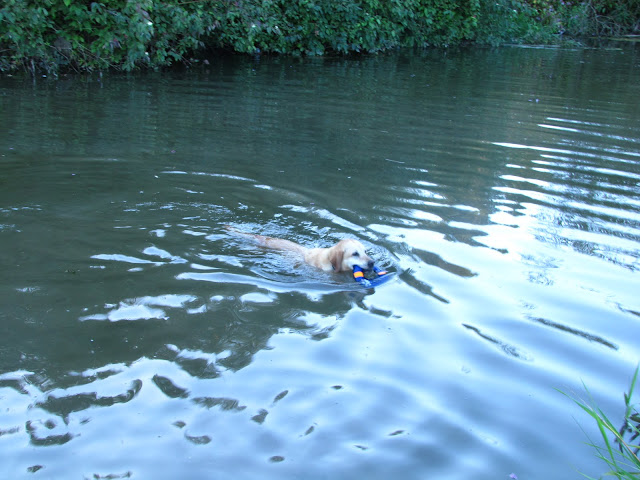 But then she found a rock, and she was happy.  Okay, a rock is the next most exciting thing to her, besides the orange hockey ball.  She doesn't chew them, just likes to carry them around, and if she can find some sandy stuff, she'll dig a hole for the rock to fall into, and then she rescues it and takes it somewhere else to dig another hole.  Weird, I know:) 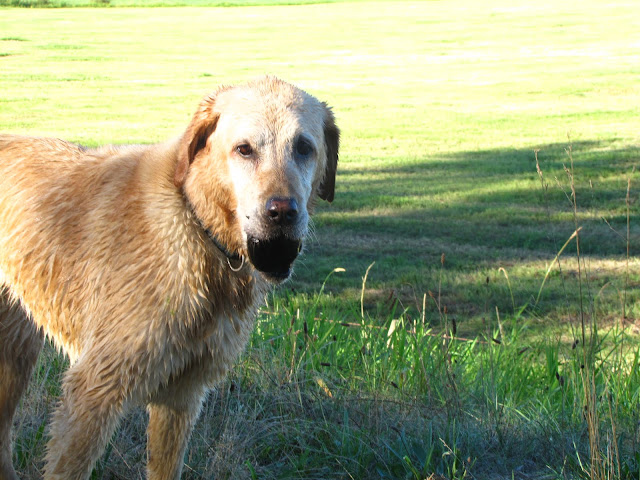 On the way back, I'm looking right at Golden Ears, the peak in the distance, which is where we were on Tuesday (at the bottom of it, not the top) 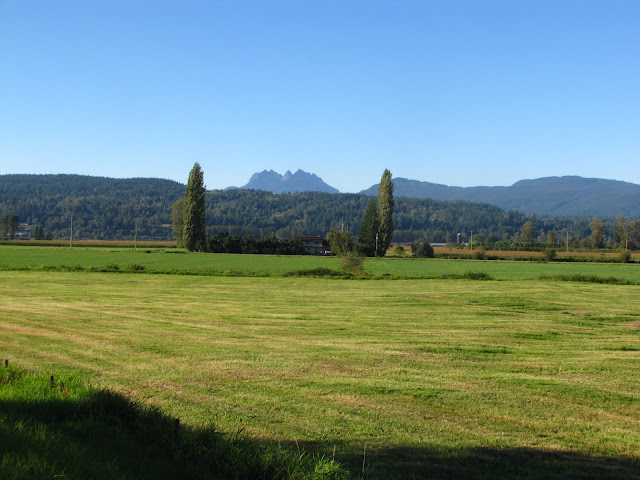 And back at the car, Calli reluctantly leaves the rock behind, but only because I said so! 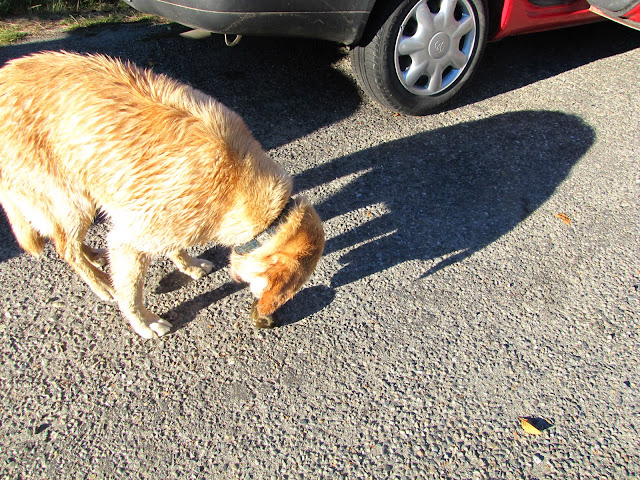