Early in the year, LAST year, this came up on Craigslist in the free section.  There were two potting benches, the smaller one farther back...... 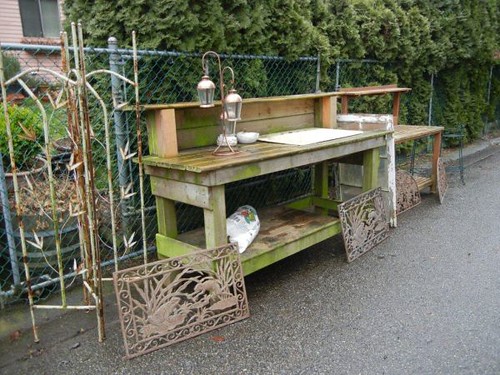 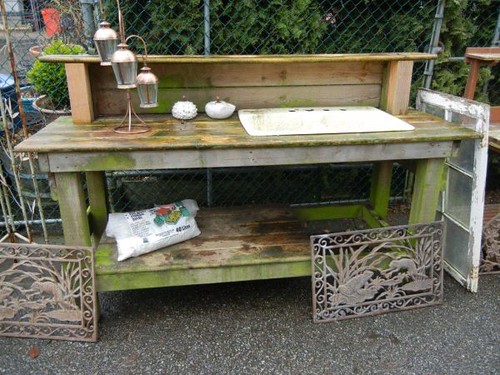 Of course I thought me, me, me, when I saw the ad.  Then had second thoughts when I saw that it was about 40 minutes away, and we'd have to take the canopy off the truck to be able to fit it in.  And then I realized that David and his girlfriend were mere minutes away, they had access to a full size pickup, and really didn't have anything better to do than go pick this up for me:)  So I gave David a call, and he wasn't answering his phone.  Finally nearly an hour later he called me back, sure, he could go pick it up, but the truck was being used right then so he'd have to wait until it was free.  The ad was first come, first serve.  Eventually it all came together and they drove over there.  The smaller bench was gone, but the big one wasn't.  Those interesting metal grates were gone too, but the three tea-light lamp, the rusty folding metal screen and bag of potting soil came home with the bench.  It was all delivered here while I was out.

And then it all sat here.  I had an idea as to where I wanted to put it, but that spot required a fair bit of preparation, and we needed some paving stones or something to put it on, and to stand on in front of it.  A couple of months later, I saw an ad for some concrete blocks and assorted bricks, also free and about 10 minutes away.  We went and got those, and got a bonus large bunch of rhubarb stalks from her monstrous plant.

And it was all still sat here this year, still not set up.  But then when we were trimming the cedar hedging along the driveway earlier this year, it all fell into place.  The last tree was a mess, didn't need to be there, and the spot it was in was the perfect place to put the potting bench. The tree was cut down, the potting bench set on it's concrete blocks, and the rest arranged in front to stand on.  I was able to hook into the water line at the greenhouse, and we had a set of taps that a relative had given us, and other than buying the drain assembly and a few connectors and hose clamps, it all came together without much money spent.
(That's the greenhouse roof behind.  I pressure washed it yesterday, and now it's all covered in Maple blossoms, as was the potting bench, until I swept most of them off.) 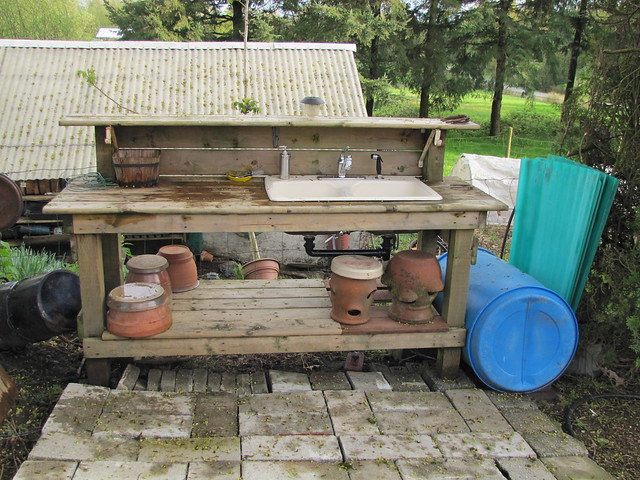 I probably won't be doing much potting on it, but it is the perfect place to wash the beets, carrots, potatoes etc for the farmers markets, with a bench below to store them overnight.  Sure beats bending over with the hose, turning the ground into a quagmire, as I try to get the vegetables clean, while they are laid on the ground. 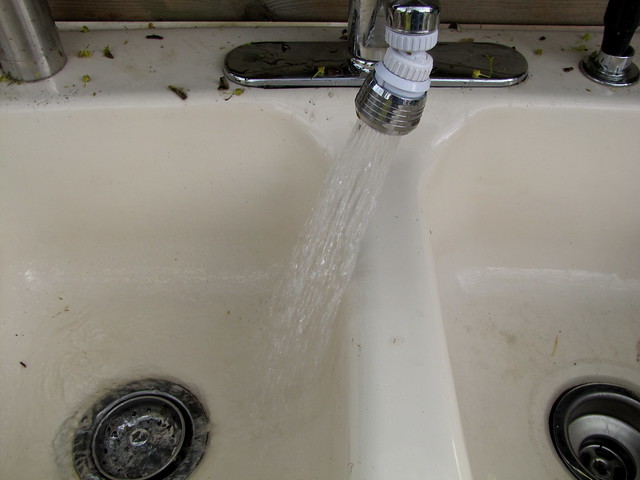 I had to figure out what to do with the drain water.  One option was to dig a big hole underneath, fill it with rocks, and let the water drain into there.  Seemed like a lot of work, and would mean having to move the bench out of the way.  I never do things in the order they should be done.  So I wandered out behind the barn where all the junk useful stuff is stored that we are sure to need one day.  I found a barrel to run the water into with a plug thing in it that had a hole in it that just happened to be of the right size and threads to screw a tap in I found in our plumbing drawer.  Phew, did you follow that? 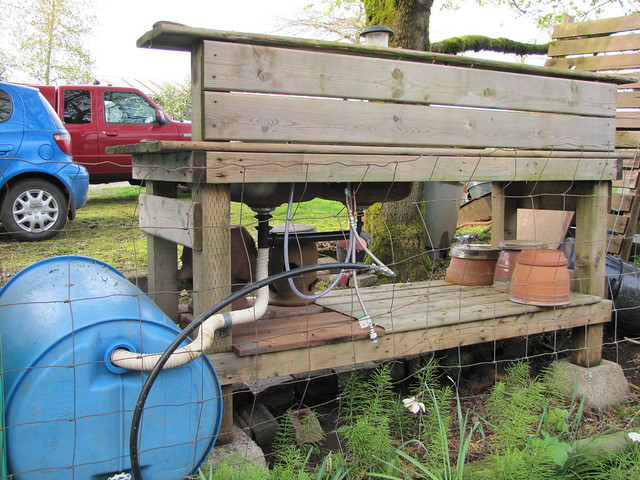 And then I found a piece of old vacuum cleaner hose to use as a flexible drain to run into the barrel.  A hose on the tap will allow me to water plants that are below the level of the barrel. 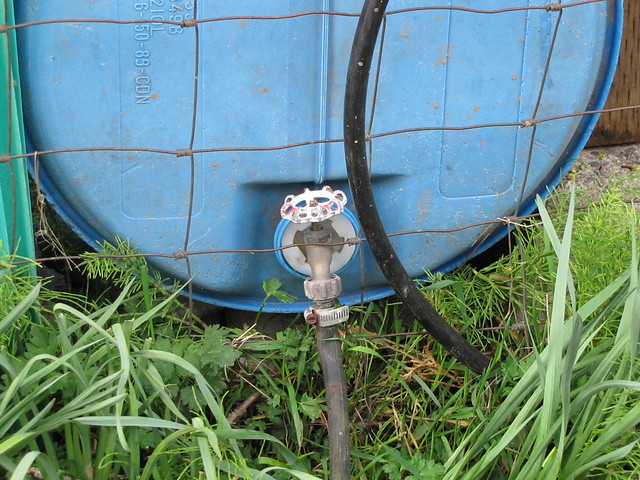 There are a few minor leaks in the drainage system, but not really a problem when it is just dripping onto the ground.  The barrel can be moved easily and emptied of the dirt that is sure to accumulate in it.  I'm pretty proud of it:)

The hot water supply is unconnected, but I am thinking of putting a T in the cold line, connecting a coil of the black pipe that will be hung in the sun, and then connecting it to the hot water side.  I'd have  a limited amount of hot water on a sunny day.  Not sure that I need it, but it seems like a fun thing to do.

We do have some lumber and some corrugated fiberglass to make a roof over it, so even on a rainy day I can be comfortable.  It is under a maple tree that drops a lot of stuff, so the roof will help keep the bench clean.

As of right now, there aren't even any beets or carrots planted, and the first potato shoot (and accompanying weeds) has just poked through. 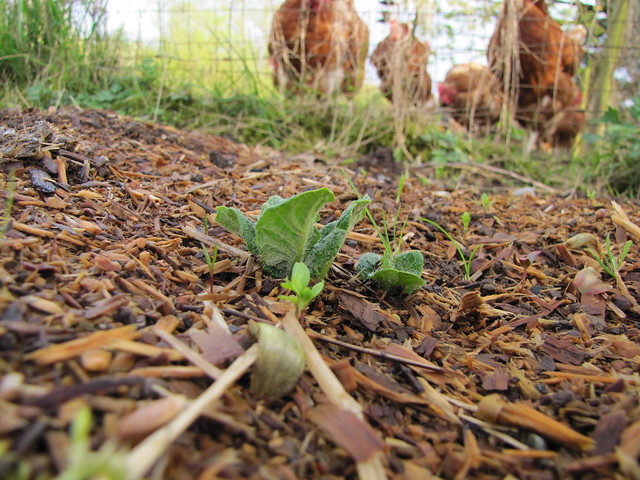 Here's the peas relatively safe behind their gauzy veils, although it looks like the weevils have been nibbling on them. They will probably outgrow the weevils. 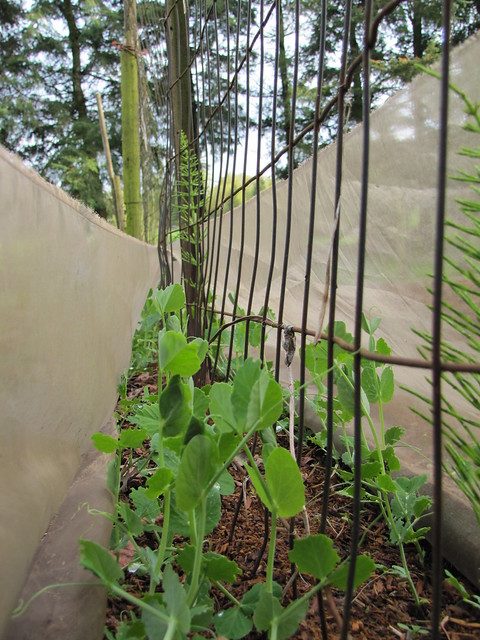 The arugula and salad greens are cosy in their tunnel. 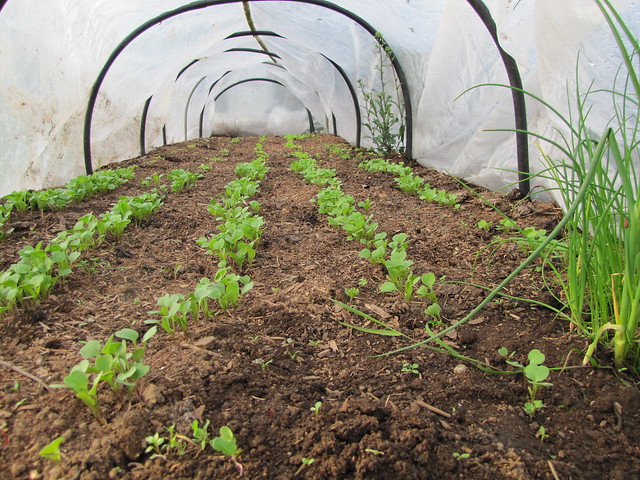 Can't wait to have something to clean in that sink!