Calli has been under the weather for a few days.  It started out with what I call goopy eyes.  Lots of goop hanging in the lower lids.  Then on Wednesday she seemed like she wasn't feeling well.  She ate okay, but she just wasn't right.  I took her to the vet yesterday and it turns out that her symptoms were the same as some of the possible side effects of an antibiotic she was on for a UTI.   Nausea and dry eye.  I had Googled the side effects, as I thought she might be feeling nauseous, but it never occurred to me that her goopy eye was actually Dry Eye.  Her eyes were producing no tears at all.  She is off the antibiotic, the urine sample showed as being fine.  I have some gel stuff to put in her eyes, which will hopefully recover okay, although they looked pretty goopy this morning.  She had showed no interest in going outside the previous two days, so it was nice to see her show a little more enthusiasm this morning.  She ate her breakfast and then wandered across the lawn and found some of that nice wide bladed grass that all the dogs like, and proceded to eat it. 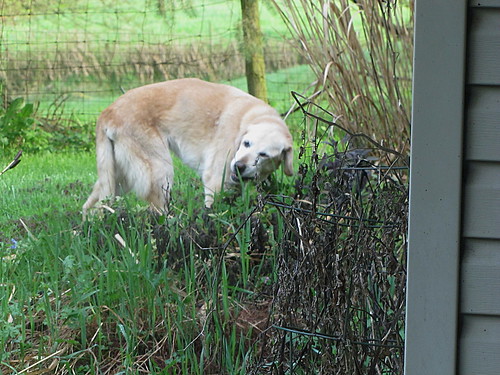 She has always been one to love eating grass, right from a little pup. 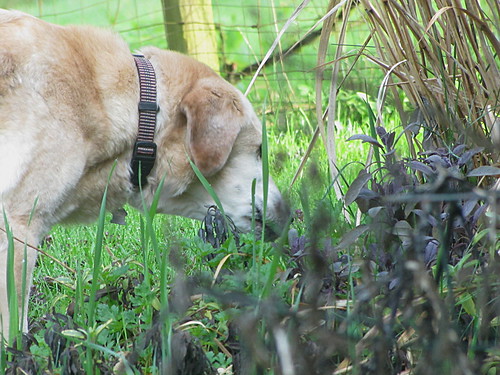 And then I noticed Smudge down below her eating her own grass.  By the time I got back with the camera, Smudge had disappeared, but then she wandered back and joined Calli and had another chew or two. 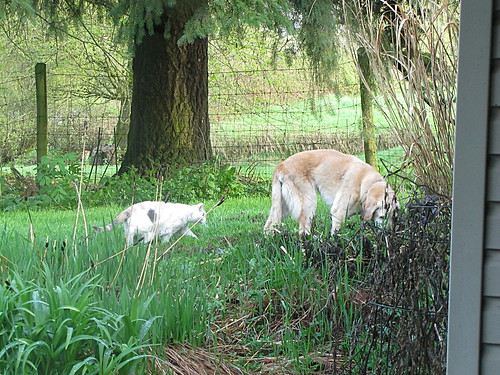 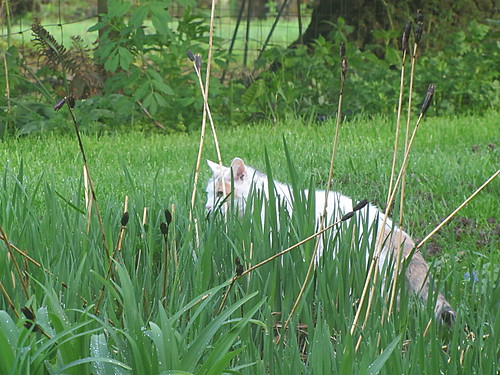 Smudge is 18 now.  She still goes outside, but stays near the house and is usually asking to come back in in a few minutes, unless she finds a warm sunny spot on the deck or the roof.  She's doing pretty well for an old cat, although doesn't groom herself as much any more.  She hates to be brushed now unless you are using the lightest of strokes, so sometimes I just hold her by the scruff and ignore the yowls and work at getting some of the clumps out.  I  keep meaning to get some catnip and see if I can send her into a more relaxed state with that:)
Posted by Karen at 10:55 AM