OUR Bush and Disrespect

Most mornings we take our dogs for a walk through what we call 'the back bush'.  It's a few acres of bush, mostly alder and maple trees, some cottonwoods and hazelnuts, and a few cedar and fir.  The undergrowth is mostly salmonberries. 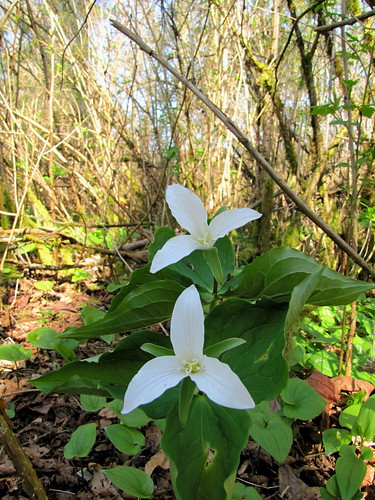 It was logged many years ago, we can see well rotted large stumps here and there.  Over the years we've made a trail or two through it, and it's our bit of 'wilderness'.  I enjoy watching the changing of the seasons as it manifests itself in our 'back bush'. 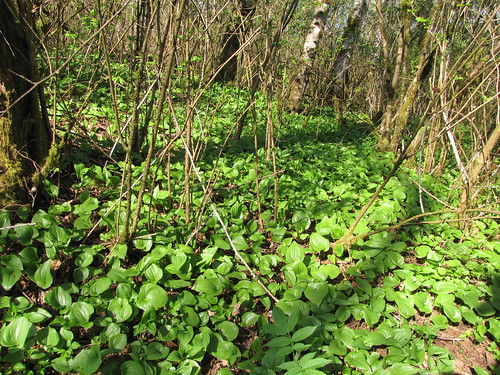 Back in January I blogged about seeing two hawks hanging around there.  I finally remembered to check out a nest that is about 60 feet up in a cottonwood. 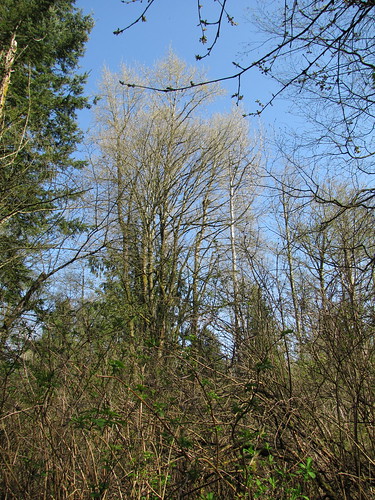 You only really notice it when the leaves are off the trees, and I've always thought that it was a crows nest.  Already the leaf buds are popping open and the trees are greening up.  Before long the nest might be hidden. 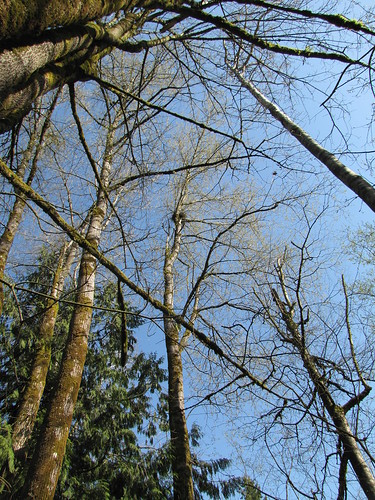 Yesterday morning when we walked down the trail, I remembered about the nest, and was thinking about the two hawks, and looked up at it as we went by. 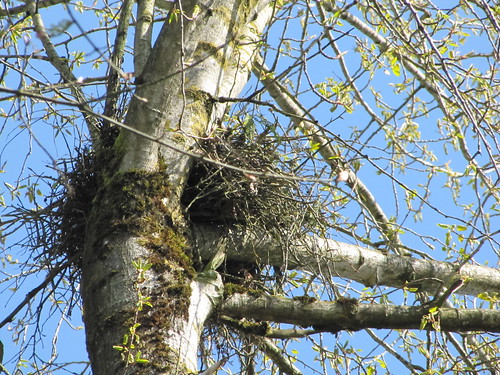 I made my best sqeaky, sick squirrel impression, and up popped a head, and it belonged to a hawk, not a crow.  Cool! 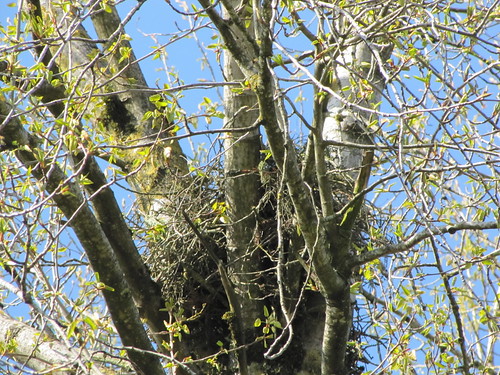 Yesterday afternoon we went back out there and a hawk flew off the nest, before I had my camera ready.  This morning when we walked out there, the hawk flew back to the nest, again before I was ready with the camera.

This morning, while walking, we got a rude surprise.  There were dirt bike tracks down our trail and through the bush field.

Now I have to back track a bit.  About 8 years ago while walking through the trail, I started to notice these blue blob things.  Then I started looking for them, and then I realized they were paintball blobs.  When I looked harder there were wooden blinds and platforms built in trees.  We could see where our neighbours had come through the fence.  Apparently they had decided to use our property to have a paintball war.  Larry went and talked to them and we took down all the wooden structures.  Fast forward to a couple of weeks ago.  One morning Larry noticed tracks on the trail.  ATV tracks.  We backtracked and found where they had cut the barb wire fence and come in from the next door property.  I was mad, but not mad enough to do much about it, and I guess Larry wasn't either.  I did fasten one strand of wire back together.  It's not much of a fence along that side, some rotten posts and barbwire running through the trees.  We were going to put up some No Trespassing and Private Property signs, but didn't get it done.

We heard and saw quads and dirt bikes going up and down the next door field yesterday afternoon.  I made a snide remark about them going into our bush next, so Larry decided to head out there and check.  He was gone quite a while, so eventually I wandered out there with the camera and a bag so I could collect some moss, and a spade to dig up some of the invasive chervil plants.  We were out there for a while, and no unauthorized vehicles made an appearance.  So imagine my shock when we walked out there this morning, and right away I noticed tracks in the grass of the bush field, and then tracks around the trail.  The one strand of barb wire that I had fastened back together was lifted up out of the way.  I was mad, really mad, and said to Larry that if we didn't have the dogs with us, I'd go over there right now.  And then I figured I could just go over there on my own.  So I tromped up to the house (and I had a shovel with me this morning) and pounded on the door.  Unfortunately no one seemed to be home.  I felt like pounding the shovel handle through the window in the door. The adrenalin was flowing.  As I was walking away, I noticed this old No Trespassing sign laying on the top of their deck railing.  It was actually kind of funny to see that. I took it with me, picked up some bailing twine off the driveway, and when I got back to the hole in the fence I hung up the No Trespassing sign:)  When we got back to the house, I looked up their address on Google street view, reverse looked up their phone number and made a call.  No answer, no answering machine.  I tried again around suppertime.  Still no answer.  I was out until late this evening, so didn't get another chance to try, although come to think about it, I probably should call at some ungodly hour.  I will make another attempt to contact them tomorrow.
Not exactly sure who or how many are living there now.  They board horses, quite a few horses by the looks of it.

We don't want trespassers on their ATV's running over these. 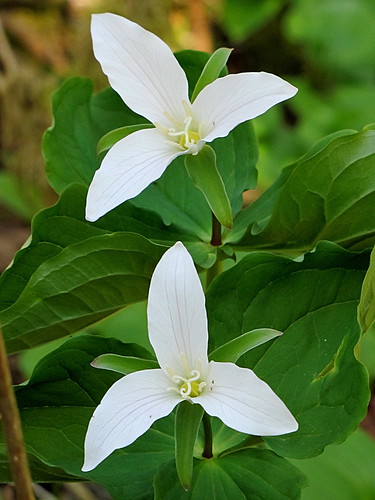