More on the Projects

Warning...a wordy and not very exciting post......
Unfortunately our planned projects created a couple of unplanned projects.  Larry had the truck canopy door open in the carport, in preparation for taking the canopy off, so we could load some soil into the truck.  He decided to move the truck ahead a bit.  Our carport has a sloped roof, and is quite low.  One handle on the canopy door got hooked behind a rafter, ripped a chunk of wood off the rafter, which wasn't a big deal, but the handle broke in the process.

Then we had problems loading the aerator back into the truck.  Too heavy to lift, and we didn't have enough of anything to make a ramp.  Larry came up with the idea of backing the truck up to the planter that is between the front lawn and the driveway.  The top of the planter is level with the lawn and about 16-18" above the driveway.  We dropped the tailgate right down, used that piece of wood that I had cut out of the door for the window, and managed to drive the aerator up into the truck.  As Larry started to pull away, there was a crack, and the planter wall was moving with the truck.  Because the aerator was so heavy, the truck had sunk, and the trailer hitch had sunk with it and got caught behind the planter wall as Larry pulled ahead.  Fortunately I yelled before too much damage was done, but the wall was leaning out a bit, with a big space between it and the soil and of course it didn't want to be pushed back. 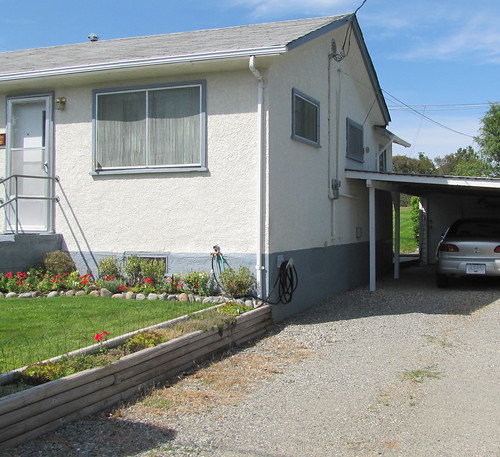 A few days later, when the truck was weighed down with a load of compost that we had bought at the Penticton landfill, we did it in reverse.  The truck was low enough again that the trailer hitch could be use to push the planter wall back into place this time. We pounded the piece of rebar that had got pulled out of place, through a new hole, and it was all pretty good once again.

We were also having trouble with our TV, or more likely the signal that our aerial was picking up.  We spent a frustrating hour yelling back and forth to each other as Larry moved the aerial around on the roof, and I was inside watching for the best picture,  to no avail.  I got fed up with that and we moved the tv outside.  The truck was parked next to the house, with the step ladder in the back.  Larry was up the ladder and I was watching the tv which was sitting on the roof of the truck cab, since the cable cord connecting the tv and aerial was only so long and we had to keep them connected.  Someone walked by and made a jokey comment about what we were doing.  Nothing solved though, most of the time we still had some flickering happening.  A few days later, there was a knock at the door, and a guy from Telus was there to tell us that they were putting fibre optic cable to the houses in the neighbourhood, at no charge, did we want it.  So I signed the dotted line, and most likely opened us up to a future flurry of 'great deals' from Telus to get phone, internet and  tv service.  We are thinking that we will probably go for internet, and use that to watch some tv shows.  Just hate to put out the monthly payments for something that we aren't always there to use.

The biggest project in my mind this last trip, was to make sure I didn't fall.  I've had a few bad falls in the last 8 months.  The first one was last summer at Oliver.  We were crossing the main road, pushing our bikes across the crosswalk.  As we got to the other side , I put my foot on the nearest pedal as we were moving and started to swing my leg over.  Right away I knew my foot wasn't on the pedal properly, but because all my weight was on it, there was nothing I could do about it.  It slipped off and I buried my knees into the pavement.  Of course the humiliation was the worst, and the pink scars on my left knee keep me reminded of that.  Now I make sure the bike is at a standstill before I try to get on.  Then I fell here, tripped on a root hidden under leaves on the trail through our bush.  I think there's another fall in there somewhere, but I can't remember that one.  The last three have been the worst, mostly because I have fallen on the same body parts all three times.
In December I was at the farmers market in White Rock, walked outside to go to a vendor, took a shortcut behind a dumpster, stepped on some uneven ground, lost my balance and went down.  As I was going down I sort of turned, and whacked the back of my shoulder on one of those metal pipes filled with concrete that are there to stop cars from hitting the building.  That was a bad one.  My shoulder hasn't been the same since.  My chiropractor said if I had hit it on the front, it would have broken.
Then in January while in Oliver, walking in the evening, I stepped on a patch of snow alongside the road to get out of the way of a car, and down I went, on that same right hip and shoulder.  I had a very ugly bruise on my hip.  In February, in the back yard in Oliver, I stepped on some paving stones that were on a slope and were frosty, and yet again I landed on that right hip and shoulder.
This trip, when we had put that sheep fencing stuff up to keep the dogs off the back lawn area, I thought about falling not falling every time I swung my legs over it.  There were one or two close calls, but I survived the trip unscathed, thank goodness.  Hopefully time and not falling on it again will fix my sore hip and shoulder.

Here's a project I started during our January trip, and finished in February.  There was nothing wrong with the table, but I had seen some nice makeovers done on some tables, and I wanted to try it. One of those projects I wished I hadn't started.  I got it all sanded in January, out in the shed in the freezing temperatures.  It took forever, I sanded it down to raw wood.  In February I put the first coat of stain on, and found out that while the table top felt lovely and smooth, there had actually been something stuck on the sanding pad on the sander, which left all these lovely little swirls.  So then I had to sand it all back to bare wood again.  I was using this horrible water based stain, that seemed impossible to spread on evenly, so the air was a little blue at times.  Thankfully it is all used up now, and I'll never buy it again.  The table top is a dense wood, lots of little pieces finger-jointed together, so you don't get an obvious grain showing.

Before (the base was the same as the table top) 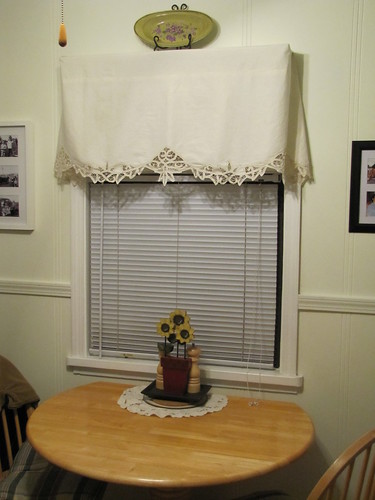 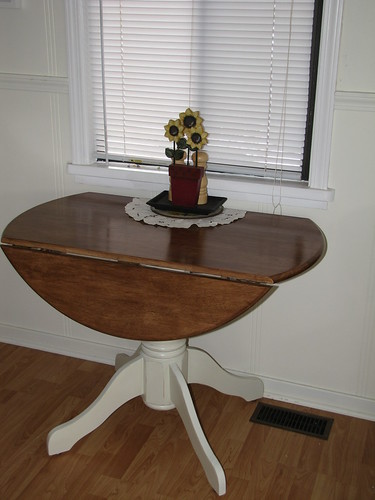 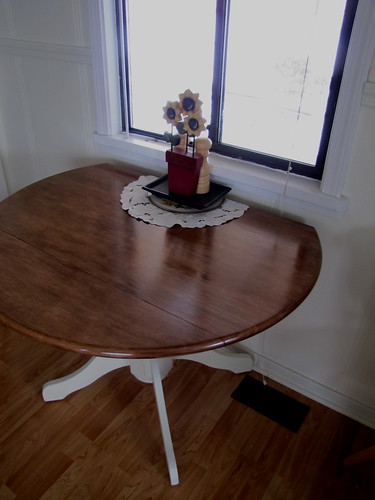 Now I need to paint the chairs to match:(

Phew, sometimes I really ramble on. Congrats if you made it to this point without being bored to tears!