This is what the back lawn at Oliver looked like at the end of March last year.

And below is what it looked like at the end of March this year (insert very sad droopy face here).
Last year we weren't quite sure how to deal with things.  Since we were only there about once a month, did we water the heck out of it while we were there, and then hope it didn't grow too much in between visits, or not water it at all and see what happened?  We knew it would die back, and then come back in the Fall when the weather got cooler and there was more rain.  Didn't happen, the coming back part that is.  Obviously some of the grass was more resistant than the rest, but the green patches towards the back are much more sparse than they appear from this angle.

(That white thing in the foreground is the back door, and one of 'my' projects) 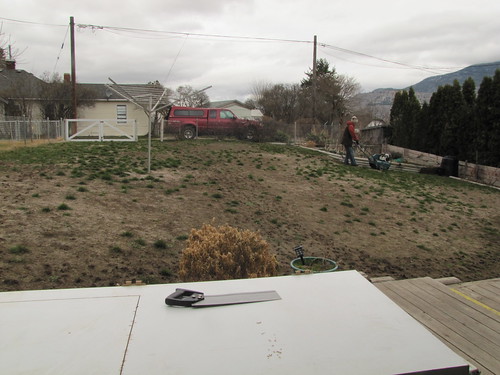 The first day we were there, we took the dogs for a walk and then stopped at a garden center and asked for advice.  The garden center had just been put up for sale.  There seemed to be no-one around, but then I noticed a lady waving me over to the house.  I was invited into the kitchen, and her husband told me how to go about reviving our lawn.  I also heard all about his medical issues, a heart operation he went to Victoria for, that didn't work, how he was 80 years old and couldn't do much now.  Obviously the reason for the For Sale sign.

The first thing he told us to do was to rent an aerator.  So Larry did that.  When he brought it back he said that he didn't even know if we could get it out of the truck, it was that heavy.  I sort of laughed at that, was sure that between the two of us, it would be no problem.  It was unbelievable how heavy that thing was.  We pulled it out and tried to slow it's decent to the ground a bit, but I knew there was no way to lift it back in.  Larry plodded back and forth, heaving the beast around on our tiny front lawn, and then did the back 'lawn'.  Advil was his friend for the next few days. 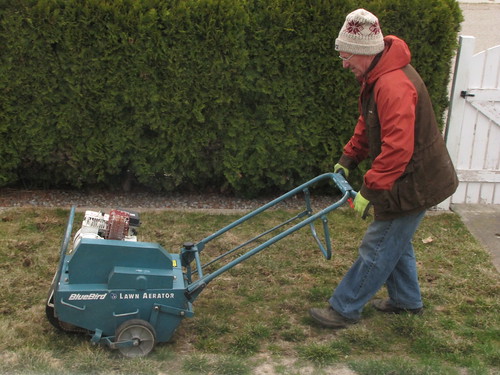 In the meantime, I knocked the hinge pins out of the back door, maneuvered it back and forth until I could tip it enough to get it through the doorway, and then wiggled it over to a small table and a saw horse that I had set up.  It didn't weigh as much as the aerator, but enough that I couldn't carry it on my own.

I have often thought that I wished the back door had a window.  All of our exterior doors here in Abbotsford have windows.  I like being able to see out before opening the door.  Last time we were in Oliver, I verbalized it to Larry.  We hung a mirror on the back of the door.  I might not have been able to see out, but at least I could make sure I was presentable before I went out there.

When we came back home I looked on Craigslist.  There was a window for $20, about 20 minutes away.  I didn't do anything about it, but did check once or twice to see if the ad was still posted.   Then one day I saw that it had been updated and reduced to $10, so that was enough to make me take action.  We drove to Mission, bought the window, and took the dogs for a nice walk at Heritage Park while we were there.

The job went fairly well.  I got the hole cut, checked that the window fit, made some adjustments to the hole on one side of the door, and put it back on the hinges.  That made it easy to put the window in, and the project was completed without breaking the window, cutting a finger tip off, or dropping anything heavy on my foot.  Success! 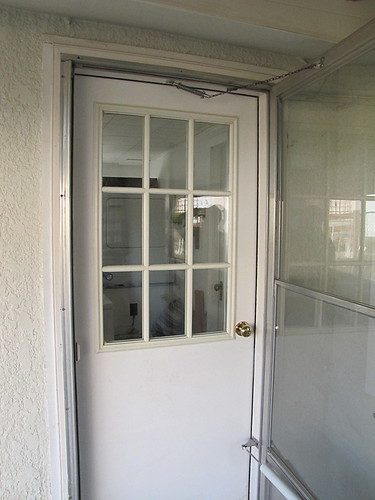 So now we can look out and see this. 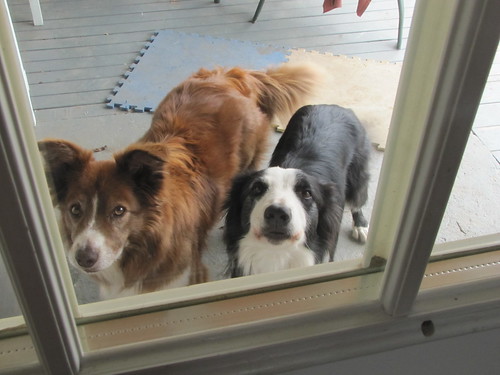 And Luna can look in to see why we are taking so long. 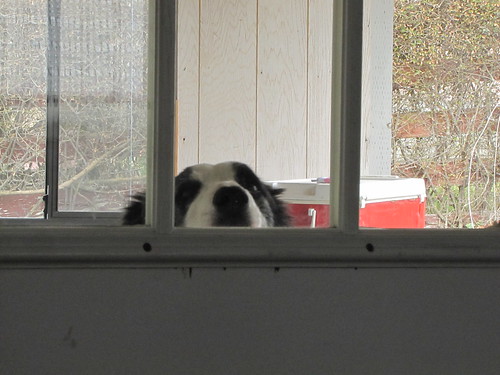 The lawn dirt patch got aerated, we brought three truck loads of some soil mix back to rake into the holes, and grass seed was spread.  We kept it damp and hoped it would germinate before we had to leave, but no such luck.  I was on my knees with a magnifying glass, hoping to see a little root coming out of the seed, but unfortunately there was nothing.  We were hoping the forecast would be for a few showers after we left, but again we were out of luck.  The weather has been warm and dry there since, so the seed will probably dry out before it germinates.  We decided it would cost more to drive back than it would to reseed.  I think the weather just wasn't warm enough yet.  Well the daytime temperatures were, but the night time ones were around the freezing mark.  Maybe we'll get a pleasant surprise when we go back in a few weeks, fingers crossed.

Our last morning there, I rescued this little tree that had been dumped, next to where we had parked the truck for our walk on the dyke.  It had been there a while, but still showed green when you scratched the bark on the little branches.  I put it in a pot, and in a sheltered spot, watered the heck out of it....and time will tell.
It's my frugal gene working overtime again. 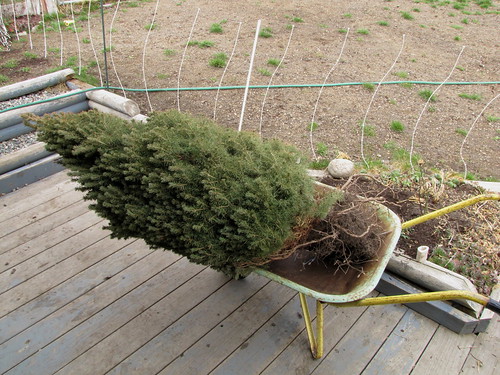