......while my husband is away.
Larry is away for a few days.  He's helping his brother and sister-in-law move to Alberta.  They left Thursday morning, in a convoy consisting of a monstrous U-Haul truck pulling a car trailer, a car, and Larry driving a van pulling a utility trailer.  The weather was good the first day out, but the second day they ran into snow through the Rockies and all had to stop and chain-up.  Apparently they were going so slow that a highway traffic patrol car drove along behind them with his flashers on.  When the road conditions got better, he pulled out in front of them and made them stop and take their chains off, so that they would get going a bit faster.  Despite the truck and van being overloaded, they made it in one piece.
After dropping my sister at the airport very early Wednesday morning, I had joined them in the loading of the U-Haul.  It was a long, sometimes cold day with a bitter wind blowing off the ocean.  Thank goodness we only got a few drops of rain.  I had thought the truck was much bigger than they needed, but I was wrong.

So while Larry's been gone, I've learned a few things....

I learned that a set of car keys, that has been missing for months and months, possibly since last Summer, were in the pocket of a pair of capris hanging in the closet.

I learned that the marks I see on the ceiling when I'm laid in bed in the morning, are not from someone tossing a dog toy or ball rather erratically and bouncing it off the ceiling.  I've seen one for a long time that I assumed was from a dirty tennis ball.  The other one, which I've lain in bed many a morning wondering about, seemed more obvious this morning.  I finally remembered to have a better look at the marks when I got up and could stand right underneath them. They are wet spots from leaks in the roof.  It's raining again, so I suppose I'd better drag the stepladder in and haul myself up into the attic with a flash light and a bucket or two. (Yep, definitely a leak up there.  The buckets are in position. Thank goodness it's stopped raining)


I learned that even though I've got the whole bed to thrash around on, I still toss and turn and wake up with hot flashes.  Can't wait 'til I'm done with this.  A good night's sleep, I've forgotten what it's like. 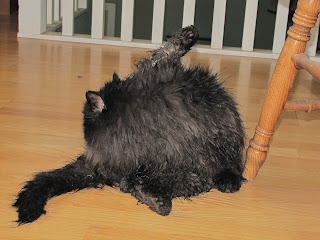 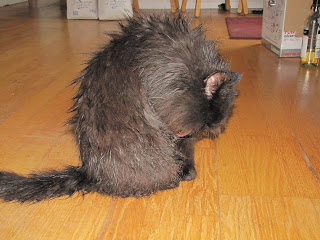 I did learn that it's possible for one person to hose down a cat, holding it's tail and scruff in one hand, and the shower head on a hose thingy in the other.  Poor Nelson, with all that long hair.  Hope I don't gross anyone out, but Nelson had a big blob of poop stuck under his tail.  I didn't think I could wait for help.  His anus was blocked, and he wasn't happy.   I got the water running in the shower, got some disposable gloves on, and carried poor Nelson into the bath tub.  It actually went better than I thought.  I'm sure if it had been Smudge I would have been bleeding.  As it was I was just wet, because every time I let go of the shower head, it didn't quite reach the bottom of the bath, and insisted in turning in such a way that it was pointing out over the side of the tub and spraying all over my legs.  I towelled Nelson off, he went and used the litter box, had something to eat, and then worked on smoothing his ruffled wet hair back into place.  I did manage to trim a bit of hair off as I was drying him, but I'll have another go a bit later.  I can't wait until that smell is out of my nose:( 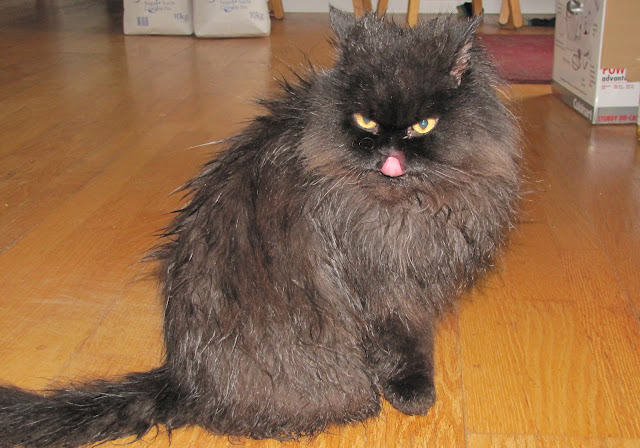 Larry's back Sunday.  I had planned on doing some cleaning while he was gone.  Some of the things I've had to clean weren't quite what I had expected.
Posted by Karen at 10:38 PM