It's kind of hard to know where to start.  Lots went on the last week.  My sister Cathy came out from Ontario to help me do some sorting out of all the things at my mum's place.  My mum came over on the Friday and we went through some stuff with her, and she picked out what she wanted to keep.  Cathy and I  saved some momentoes.  Friday and Saturday we held a garage sale.  It was too late to list it in the local paper, so I posted it on Craigslist and put up lots of bright signs.  We even had a guy stop by on Friday who must have seen the CL ad.  Saturday morning we were up early getting stuff set up outside.  Most of the big furniture we left inside.
The sale was advertised as starting at 9am, and the first dealer showed up at 7:40am.  At least by that point we had most of the stuff ready to go, and I was just heading out to put up more signs. 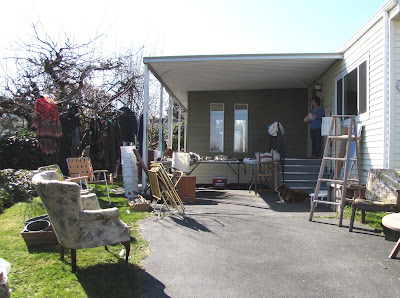 Lets just say that the amount of people that showed up was just amazing.  There were only a couple of times between 7:40 and the 3pm when it was supposed to end, that we had no one there for 10 minutes or so. These photos were taken at the end of the day on Saturday.  You can see Jake on the driveway by the stairs.  He was the official greeter.  Saturday evening I went back home and reposted the ad as a new garage sale on Sunday, and added pictures of the big pieces of furniture that were left.  At 9am sharp a young couple rolled up wanting to buy one of the dressers.  It was a lot quieter on Sunday than Saturday, but attendance was decent.  By the end of the day all the big furniture was gone.  Even that chair on the left, which we had put on the free pile, was gone.  It was something that I had reupholstered in my teens, using an upholstery book from the library.  Most people looked at the faded, cat scratched fabric, and noted the loose woodwork, and said it was way too much work.  Finally the right person came along and threw in the back of her SUV.  It finally came out that she was an antique dealer.  Sure, stripped and restained, the framing tightened up, and redone with the right fabric, the chair would be a real gem.  It would be a lot of hours to get it there though.  We were told the signs were great and so were the prices.  We needed good signs, as we were hidden away in a obscure little area, in a cul-de-sac, that no-one would normally ever venture in, unless they were one of the few that lived there.  I did a lot of fast talking to convince people that they really needed that dresser/couch and chair/ sewing machine etc.  We have since taken boxes and bags of stuff to the thrift store, and there is more to go.  There are a few things that need to be done and then the For Sale sign will go up.  My sister is back in Ontario.  Oh, and did I mention the weather.  It was the most beautiful weekend of the year.  Sunny, but not hot, it could not have been more perfect.  And since then, well we are back to clouds, showers and rain.
We had the original clothes tree! 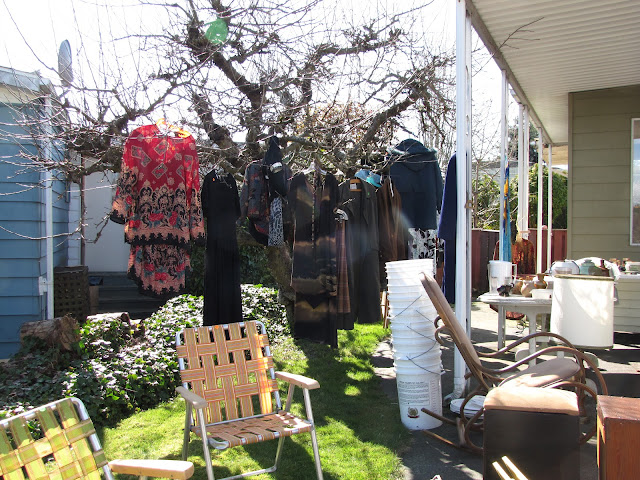