I am fed up to here (holds hand at neck height) with rain.  It's been raining just about every morning for what seems like weeks.  I know it's not, but it seems like it.  Actually, I do remember seeing some blue sky one morning not too long ago when I got up, but by the time I got outside it had disappeared, and guess what, it was raining again.
Here's two pictures taken taken late Thursday afternoon, within a minute of each other.  To the west it has cleared up, and the sun actually shone for a bit, and to the east is the storm that has just passed over, with it's rain, hail and thunder.  Apparently Jake glued himself to Meredith's leg in the kitchen while the thunder rumbled.  I was off to the west, enjoying that sunshine, sort of, and looking at the black clouds to the east and wondering if they were dumping on our place. 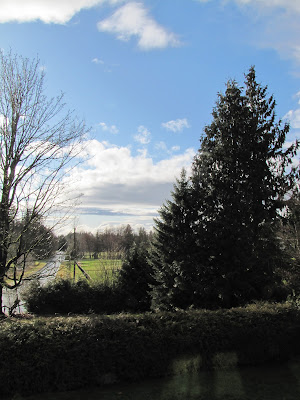 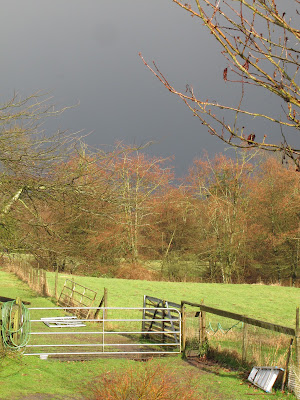 The blue sky didn't last long, and a couple of hours later, as the sun was setting, we got this rainbow.  It disappeared into the clouds in the middle, and the right side was not as bright at the left, but it was the full thing. 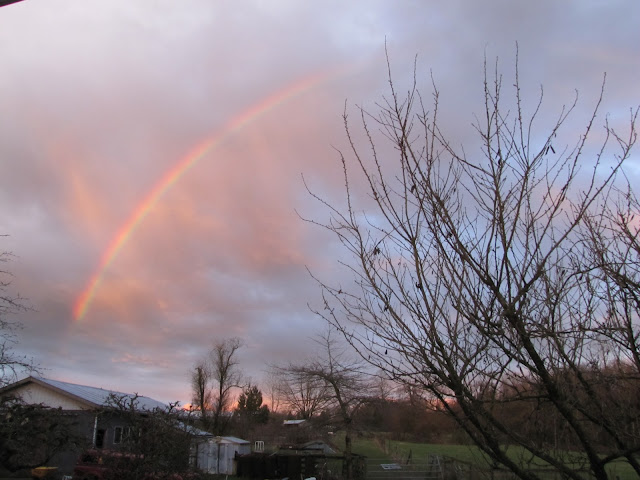 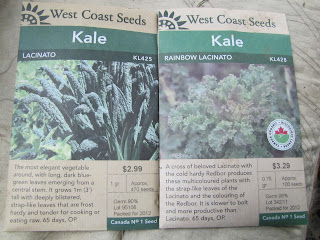 Sure, Spring is coming, the grass is growing, the crocuses are blooming, and the daffodils are almost there.  But the temperatures are well below seasonal normal, we had snow on Wednesday, and we have had so much rain that the ground is sodden and still cold.   I started a some kale seedlings in the house.  They are in a south facing window, but are already getting leggy, so I want to move them out to the greenhouse.  Before getting the benches set up in the greenhouse, I wanted to power wash it, inside and out.  This afternoon I dragged the powerwasher out, filled it with gas, gave it a couple of pulls to make sure it was going to start.  Yay for Honda engines.  Then I hooked up the hoses, got the ladder in position, got my rain gear on, and started it up.  I couldn't get any water out, grrrr.  In the end I took the whole nozzle assembly apart, flushed it, and got the water moving through, but then there was no pressure.  It seemed like the pump wasn't working.  I'll have to see if I can get David to have a look at it.  I spent an hour and a half fiddling around with it, accomplishing nothing, so was feeling  just a leeetle pissed off. 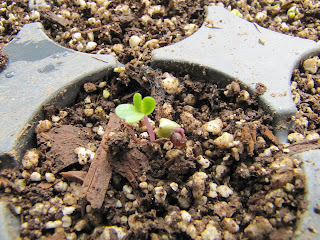 Normally I would have potatoes planted by now.  The fruit trees aren't all pruned yet.  None of the garden has been rototilled.

I started writing this Friday night.  It's now Saturday morning.  Despite seeing stars out of the window as I was going to bed, guess what, it's raining again.

Hope it dries up by 10am.  That's when Meredith are going out for our training run.  We've done a few runs in the rain just lately. Light misty rain is fine, it's a natural coolant.  Heavy rain not so much.  Today we do our 5 minute warm up and cool down, and 40 minutes of running, split into 10 minute segments with one minute of walking in between.  On Monday we did 55 minutes of running, in 10, 15, 20 and 10 minute segments.  I survived.  My legs were dead at the end of the last 10 minutes, but after doing the 5 minute walk at the end, they felt 'normal' again.  I walk away from those Monday night runs feeling so proud of myself.
On Thursday night we watched an interesting program.  It was called The Perfect Runner.  How as a biped, man evolved into the perfect endurance runner.  How early man used to run his prey down, using endurance, not speed.  If you've got 45 minutes to watch it, it's really quite interesting.  It makes me want to run more, and I feel excited about this morning's run.  We are going to the dyke along the Fraser River, which is not the one where we usually walk the dogs.  It is flat of course, but the footing will be a bit uneven, which brings it's own challenges.  Quite often, for whatever reason, Meredith or I seem to struggle with the Saturday run.  We ran hills on Monday and Wednesday, so flat will be a nice change today.  The Sun Run is four weeks tomorrow.  I'm starting to feel excited.  The organization that is putting on the running clinic has rented a bus.  It costs us of course, but it's easier than trying to get into downtown Vancouver with 50,000 other people early Sunday morning.  I'm hoping that morning dawns cloudy with a nice cool breeze. It'll be here before I know it.
Posted by Karen at 8:17 AM