Getting By With Help From Your Friends

I was woken early, before daylight (or maybe I was already awake?) by Luna barking down by the family room door, a floor below and at the other end of the house.  Just a quick sharp bark, to tell whom ever's listening, that she needs to go out.  Seems that the only one ever listening is me.  The only reason I can figure that she goes to that door, which is not a door that we go out very often at all, is because it was the first door she was let out of when she came here.  Sometimes it only takes doing it once to teach something to a border collie:) 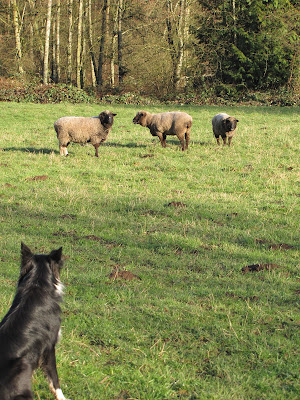 I dragged myself out of bed and called her up and let her out the back door onto the deck, with it's nine stairs that leads to the patio and the back lawn.  A few minutes later I opened the door to let her back in, and heard a sheep bawl.  A rather feeble, mournful bawl.  Sounded like The Fat Ewe.  It was rather weird. There was no need for them to bawl, they had access to the hayfield, they hadn't been getting any grain, so weren't expecting any.  I opened the door again, and another mournful bawl, and The Young Ewe bawled at me as well.  Time to take a look.  There were no shoes near the back door, and I didn't want to go downstairs which would cause a mad rush of border collies, because SOMETHING EXCITING MUST BE HAPPENING OUTSIDE.  I figured I'd just tiptoe across the gravel driveway in my bare feet and nightie, and see what I could see.  Thankfully there was a flashlight in the kitchen.  I did take note of a few frozen snowflakes on the deck.  When I get across the driveway, the two aforementioned ewes stared back at me through the gate, but I could hear some banging from in the barn.  The Old Ewe must be stuck in something.  So I figured I'd already come that far, what the heck.  On I went, through the gate, tromped through the mud and sheep muck to the barn, where The Old Ewe was flat on her side, legs flailing, unable to get up.  Heaved her over, and pulled her up, and tromped back through the muck to the driveway.  (Larry asked me later why I didn't go up the driveway and through the barn to the end where the sheep were, which would have avoided most of the muck, but isn't it already obvious I wasn't thinking very straight at that time in the morning?)


The stuff I  slopped through last night with today's moisture added to it.    Not deep, just slimy. 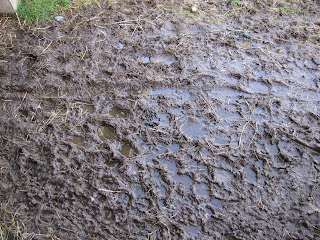 There was a hose hanging there, so I stood on the grass and turned it on and tried to spray my feet off.  Got my feet a bit cleaned off, but then the water stopped, as it was just cold enough outside to freeze part of the hose.  Continued to the patio and then stood on one foot and then the other, swishing the opposite one in the water in the dog pool.  Back inside, dragged something out of the clothes hamper to rub my hopefully relatively clean feet dry. No lights were turned on during this whole episode, well other than the flashlight.  Climbed back into bed and actually managed to fall back to sleep for a little bit.  The Old Ewe was not looking particularly thrilled about life this morning, although she did take a bit of grain I offered her, and then later drank quite a bit of warm water with molasses in it.  Time will tell.  But I have to wonder....were those other two ewes really trying to tell me something was wrong? 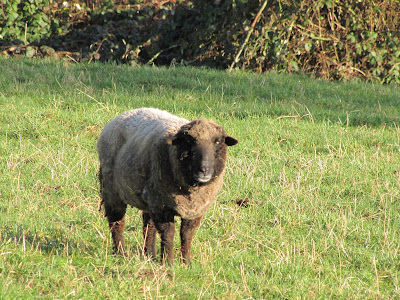 PS - By this afternoon, between rain and snow storms, (it's been a very weird day weather wise) all three ewes were back out grazing.  The Old Ewe's ears are still hanging a bit low, a sign that not everything is necessarily all right in her world.  April would have been 16 this year, so this ewe could easily be 14 years old.
Posted by Karen at 9:36 PM