I don't buy any dog treats.  The good ones are too expensive, and the cheap ones, well they're cheap for a reason, mostly because they are full of nothing much that's any good for a dog.
Yesterday I picked up a package of chicken gizzards and one of chicken hearts.  They were at their best before date, so they were 30% off.  That's the gizzards on the left, and the chicken hearts bottom right.  The two big chunks at the top are a piece of beef heart I already had thawed out, and underneath is the last bit of a piece of beef liver I had been feeding the dogs. 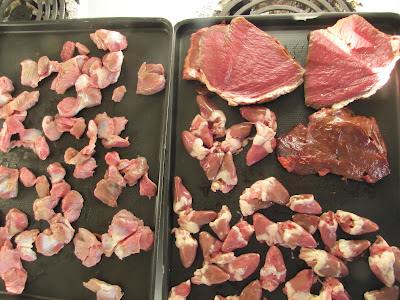 I put them in the oven at 300 degrees for about 20 minutes.  Then I turned the oven off, left them in there to  cook a bit more, and then cool off,  and we went outside and did our morning chores and our bush walk.  When I got back to it about 45 minutes later, the chicken gizzards were done enough, so I just cut them into little pieces and bagged them up.
The chicken hearts I cut into four or six little pieces, depending on how big the heart was, and I sliced the beef liver and heart up small.  Each piece is about the size of a pea, or the end of your little finger, or about 1/4 inch square.  The trays went back into the oven.  I had it at 225 degrees this time, and I just left them in there until they were fairly dry and firm, but not hard, maybe an hour or so.  They can be cooked at a higher or lower temperature, but if the temperature is higher, you just have to keep a closer watch on them.  The lower temperature gives you more room for error, and since I tend to wander off and forget about them for a while, it saves them getting overcooked, which makes them really hard. They do harden more as they cool.
This is some of the beef liver and heart after they are done. 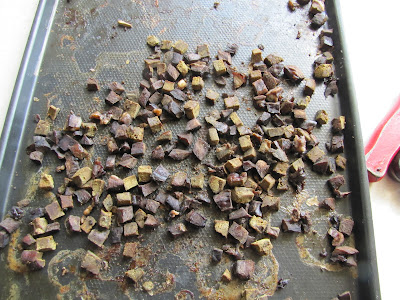 The chicken hearts were quite fatty, and I probably could have left them in a bit longer, but I didn't.  I wrapped them up in some paper towel to absorb the fat and dry them off. 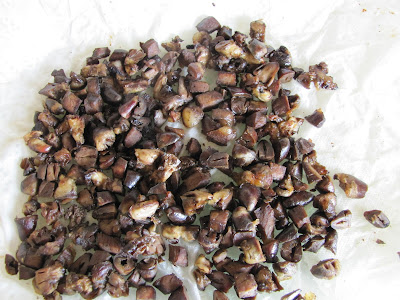 I mixed them all together, put them in a zip lock bag and keep them in the freezer.  So for about $5 of meat, I got 1 1/4 lbs of additive and preservative free dog treats.  They are the perfect size for training, and are soft enough that they can even be broken into smaller bits.  Nelson and Smudge like them too, right out of the freezer.  And I'll confess that I do like liver, so I've been known to eat some of them myself.
I can hear some of you saying 'oh...gross' from here:) 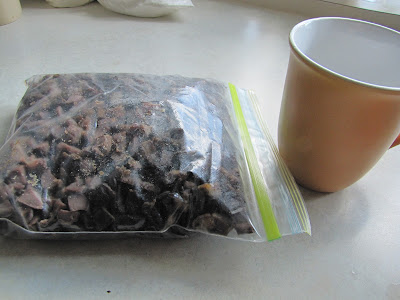