In The Garden - Garlic 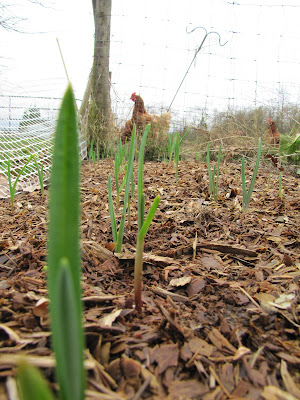 A year and a half ago, when we were on holiday in the Okanagan, I bought a pound of garlic for $8.  I planted some of it that Fall, and used the rest of it for our cooking.  Last summer when the cloves I'd planted were ready, I sold about 20 bulbs. Of the rest,  I planted 75 cloves last Fall, and saved the remainder for us to eat.  It was such nice garlic that I've been really generous adding it to our meals, and now it is gone.  I might have to consider that questionable, cheap stuff from China if I want to add fresh garlic to my cooking for the next few months.  Shouldn't have sold those 20 bulbs, damn! 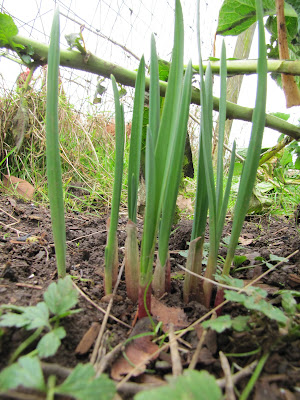 The other day I was happy to see that all of those 75 cloves I'd planted last Fall had come up.  When I glanced over to where it was growing last summer, I realized that I'd missed digging up a few bulbs, as there were some clumps of garlic shoots very close together. Shoots growing out of the same bulb togetherness.
It's not surprising, as I left them very late to dig up, and in some cases the tops were no longer attached.  That's why I missed a few.  I thought about digging these sprouting clumps up and just using them to eat, but since they were no longer dormant, but were actually growing, I knew they wouldn't keep well. 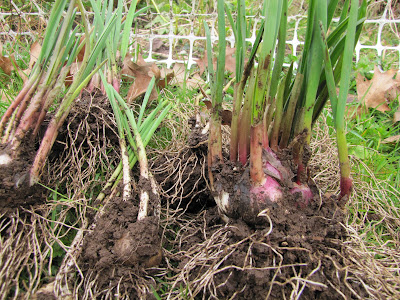 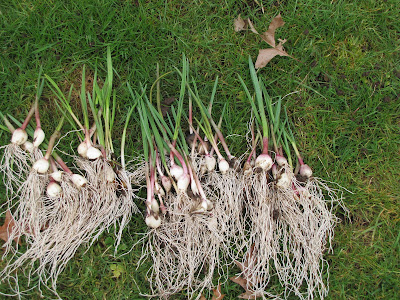 So in the end, I blasted them with the hose to get rid of the dirt, and gently eased them apart.  Then I trimmed the roots down to two or three inches.  I used a broken shovel handle to make more holes, and tried to get the clove and it's roots as straight in that hole as possible.  I know they wouldn't have formed bulbs as they were, so hopefully now they'll plump out and at least form a few more cloves.  There were 59 of them altogether, so all going well, at the end of this summer, along with the original 75, there will be enough garlic to plant this Fall, and to last us over the winter, and some leftover to sell.
Posted by Karen at 10:03 PM