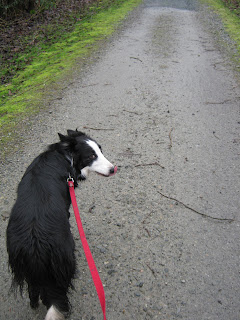 Yesterdays's run went well.  We were late getting started, as we both forgot to eat our breakfast early enough.  Turned out that the timing was good though, as although it was raining lightly on the ten minute drive to the dyke, it didn't rain noticeably while we were running, but started again right as we were finished and were doing our stretches. Couldn't have worked out better.  Started off with Luna off leash.  We are in a regional park, and yes, she's supposed to be on leash.  There wasn't a soul in sight, and once we got running she stayed on the top of the dyke with us.  Eventually we had to go down on a trail that was closer to the river, to pass by the sewage treatment plant.  The wind was blowing the wrong way:(  We stayed on the lower trail once we were past and into clearer air.  We spotted our first people, heading our way, with a dog.  Luna was still off leash, and so was that dog.  As they got closer they shouted that the dog, a small Sharpei, who was coming ahead to greet us, was friendly (don't they all say that?).  I just told them that Luna would tell him to get lost, which she did. I had planned on putting Luna on leash, but left it a bit too long.  Just after that a quad with two people on it appeared around a bend in the trail.  Busted!  I knew it was the parks guys, so quickly fumbled around and put Luna on the leash, and they just smiled at me as they passed.  Not sure what happened when they caught  up to the other couple.  Further along when we got to the parking lot near the Mission Bridge, we made a 'Pit' stop.  And then the Sharpei came running out of the trail we had been on.  He was running around like he was lost, I tried to call him to us but had no success.  We were at the halfway point, so just started running back down the dyke.  We did eventually come across the dog's owners, and the dog had run back down the trail and joined them just before we got there.  The guy said that the dog had just suddenly taken off, and even then, after he had come back, he wouldn't come close enough to be caught.  Leashes were meant for dogs like that. 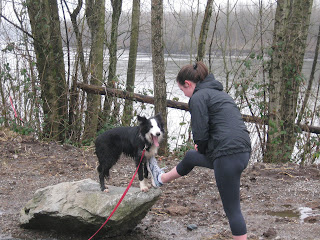 We were happy with the run.  Meredith had been having some knee pain.  After watching The Perfect Runner, she was trying to run less flat footed, and more on the balls of her feet.  She said her knees felt pretty good at the end.  7.4 kilometers in 40 minutes of running, and 14 minutes of walking. 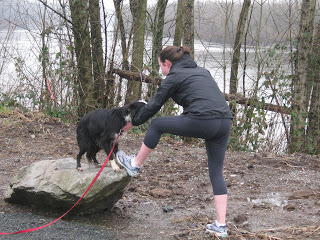 This morning it wasn't raining, it was snowing.  Then it turned to rain, then there was snow mixed in.  Global warming, wherefore art thou?  Must be back east....26 C predicted for Winnipeg today, and 23 C for Ottawa.  That's above zero, not below.  That's summer weather.  My sister is coming out from Ontario next week, hopefully she'll bring a bit of warmth with her.
Posted by Karen at 1:20 PM