Look What We Got!

Luna and I went to an agility trial last night and today.  I think it's been six months since our last one.  Not really sure why we didn't enter in any, well in the Fall it was because we were still doing the farmers markets, but no real excuse for not entering in January and February.  Even this one, which I had planned on attending, well I didn't get my entry done in time.  They even have online entries.  But then it just happened that the lady running the trial had to phone me about something, and in the end she told me to just email her with my entry, so I did.  And we were in.  We had two classes last evening (the trial started at 6pm) and then 6 classes today, which started at 8am.  This meant I needed to be up at 6, but that just seemed too early (I haven't been doing early mornings much lately, well really not at all).  So I set the alarm for 6:15, and then hit the snooze button twice, and then turned the alarm off, and then had to leap out of bed at 6:45.  A bit of a rush, but we were on the road at 7:13, and it is a 25 minute drive.  Just enough time for Luna to do her morning business before she went into her crate which was still there from the night before. I walked two courses, and then we were the fifth team in.

Between last night and today we had 8 runs.  Luna 'qualified' in 5 of those runs.  That means the run was clean with no faults, and was under the allowable time.  In one of the other runs, she didn't qualify, but still came in first place in her group.   To qualify is more important than a placement ribbon.  It is the qualifying runs that allow you to advance into the more difficult divisions.  The red and white rosettes are the qualifying ribbons.  The plain red one is her first place ribbon.  The turquoise ribbon is because she received enough qualifying runs of a certain type, to move her up to the next division. Clear as mud I know.

But for the Lunatic, this was probably the best trial she has ever had.  Some of the runs were a bit wild and a lot 'not pretty', but what counts in the end was that she got around the course clear and under time.  I don't have any video, just these sad looking pictures.  Because I don't bother to keep the ribbons, I just 'borrowed' them to take this photo, which was on a relatively clean looking table under the grandstand next to where her crate was.  Then the ribbons were put back and we went home without them.


I tried hard to make her look alert and intelligent, but no matter how many exciting things I talked about... 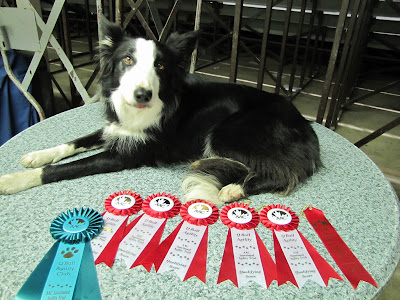 She found it all verrrrry  boring 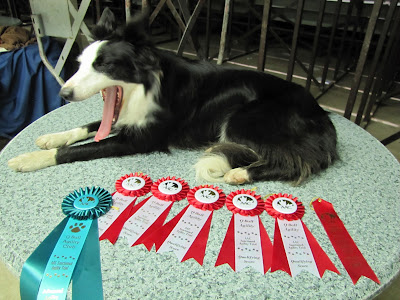 And figured she'd just take a nap until I was done 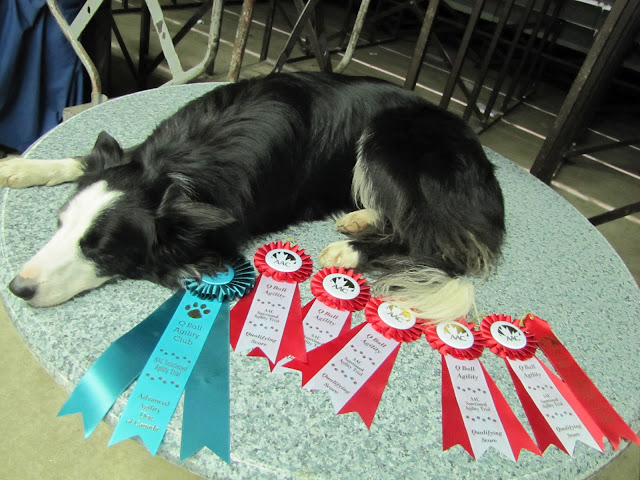