Oliver, or Maybe Not

Early afternoon we headed north out of Keremeos, took the turn off to Twin Lakes, and tried to end up at Oliver via the back roads.  A lot of twists and turns and downhills, and when we stopped to read the sign at the White Lake Radio observatory, we could smell burning brakes.  One of the wheels on the trailer was hot.  We took it easy after than, but didn't come out on the main highway quite where we thought we would.  Larry remembers on a previous trip coming out right at Oliver.  This time we were much farther north, past Okanagan Falls.  Definitely took a wrong turn somewhere.  So we headed back south to Oliver and started checking out the campsites we had read about.  We had planned on spending a few days there.  We were interested in cycling the trail that runs along the Okanagan River. What had sounded just lovely in the accommodation guide and on the internet, wasn't quite that in person.  All the government campsites were closed for the season, which is really frustrating, and more than one person we talked to felt the same way.  There is a lovely campsite right in Oliver, next to the river and the Trans Canada Trail, run by the town.  Nice grassy sites, next to a park. Closed at Thanksgiving.  We wasted a lot of time and gas, driving back and forth. A few of the RV parks were right in the town, with nowhere to walk the dogs close by.   It wouldn't be so bad with just Jake and Luna, but Calli makes it a bit harder.  Because she has limited bladder control, she doesn't always pee in the appropriate location.  When she's gotta go, she just goes.  So you kind of want some sort of grassy area really close by.  Anyway, Larry remembered passing a more 'rural' looking campsite on the drive between OK Falls and Oliver.  So back north we went.  Well that campsite had closed early because they were doing renovations.  They were quite helpful, and phoned a few other places for us.  Back to OK Falls we went.  There is a lovely government campsite there, but of course it had just closed.  We drove around town, and then ended up at Sun and Sand.  The kind of place we would normally avoid.  There were only three other RV's in there on a nightly basis, so it wasn't full, and all the rest were there year round, although not occupied. It was even partially shut down for the winter.  The water hookups were turned off, and the washrooms, including the showers, were closed.  On the plus side though, there was a park right across the street, and at the other end of that park, was the Trans Canada Trail.
Here's the dogs and I the next morning, in the park, looking back at our truck and trailer.  The dogs seem to know that Larry is moving around in the trailer, and are waiting for him (in vain).  Before we walked up to this bench, there was a whole flock of quail, sunning themselves on the concrete pad.  One of those photos that the camera batteries said I wasn't going to get. 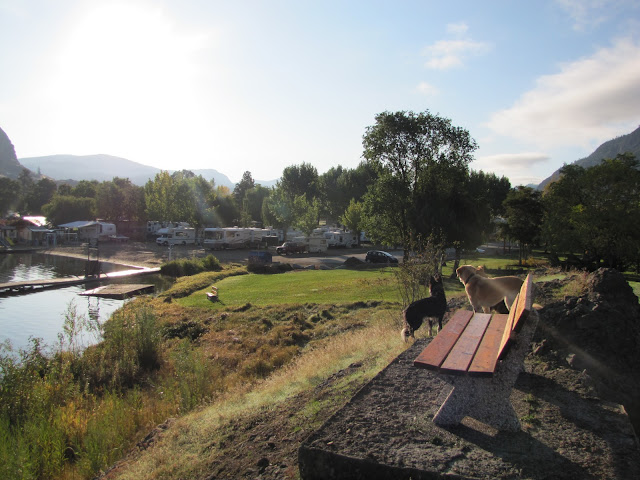 Looking the other way there is the Trans Canada trail, running over that trestle bridge and then all the way along the lake to Penticton.  On the other side of the campsite was a park and beach, and part of that beach was assigned to the dogs.
We figured we were in a pretty good spot. 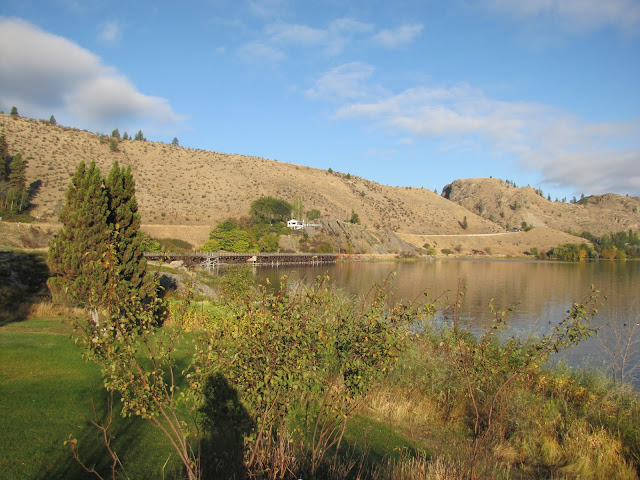