aka Nelson aka bedroom cat.
Nelson was my mum's cat.  She adopted him from the Langley animal shelter six years ago this month, a couple of weeks after her keeshond Keesha was put down.
Now that was a Thanksgiving dinner to remember.  Mum and Keesha were here for dinner.  Keesha had some sort of major seizure/event.  David, Larry and my mum all went to the vet, just around the corner from us, who thankfully had had his turkey dinner the night before.  While I continued cooking ours,  unfortunately the vet suggested that considering Keesha's advanced age, added to what the xrays were showing him, that it was best to let her go.
Before we sat down for dinner, Larry and David had buried her under our oak tree.
Let's just say that that Thanksgiving dinner was not a joyful event.
Anyway, my mum felt the immediate need to fill the hole the Keesha left (although there was many a time that she found Keesha annoying, and would have been glad to have her gone).  I suggested that she adopt a middle aged to older cat, but no, she wanted a younger cat. 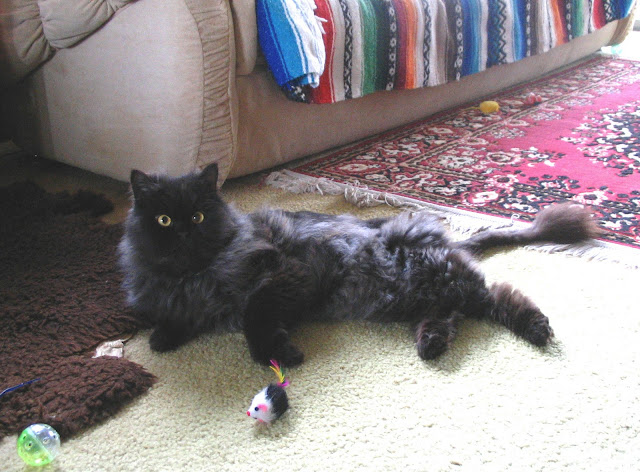 Nelson (who was listed as Nero), had come in as a stray, extremely matted, and now sported an unbecoming lion cut. His back, sides and all but the end of his tail had been shaved.  Mum figured that she would be able to sort that out, and to give her her due, she was excellent at keeping her animals well groomed.  We never saw a better groomed keeshond than Keesha, and Nelson also was kept looking good, once his hair grew back in.   Oh, and once we figured out that a comb was better for his coat than a brush.
So Nelson thrived.  He quickly went from an inside cat to an inside/outside one.  He had a cat door, so he could come and go as he pleased.  He was company.  My mum's mental state had it's ups and downs.  She suffered from depression.  Having a pet is supposed to help with depression, but when she was at her worst, she found Nelson extremely annoying.  He is a very very vocal cat. I think somewhere under all that hair there is a Siamese cat lurking.  She took his meowing as demanding food, of the canned smelly kind.  I tried to convince her that if she ignored him, instead of eventually giving in and putting meat in his dish, the meowing might decrease.  She could never hold out.  It wasn't so much that she was giving in to Nelson, it was that she couldn't stand the meowing.  It was a love/hate relationship, sometimes heavier on the hate than love.  She wanted us to take Nelson, I refused.  Reason being that we had an old cat Smudge that had been on her own for a long while.  Add Luna to the mix, who fixates on Smudge, and then take Nelson who is terrified of the dogs.  Add to that the fact that we didn't want another cat, as well as my Mum trying to use us as an easy 'out'.  Then she would get to feeling better and Nelson would be sort of back in her good books again.
At one point I had found someone looking for a cat, we had a few telephone conversations, and it was all set for me to meet him at my mum's to pick up Nelson.
My mum phoned me at the last minute to cancel out, she couldn't do it, she couldn't let Nelson go.  The guy was already on his way out from Vancouver, and I had to phone and tell him no.
Several times after that, she regretted that decision. 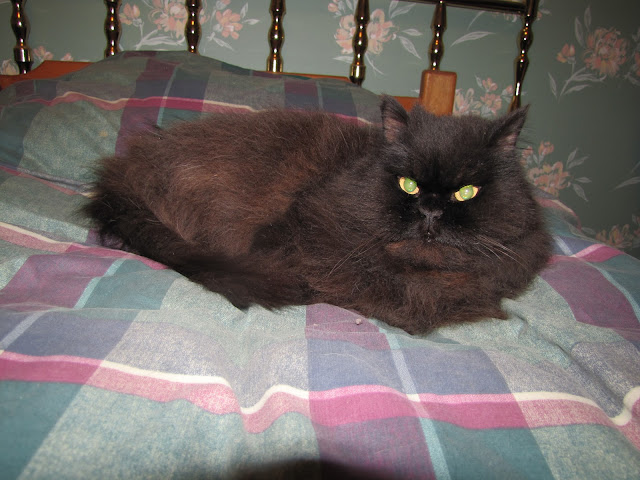 So time moves on and my mum had a stroke last May.  She has not been at home since then.  Nelson came and went, he had a feeder, and every few days I was there,  and gave him a brush and some attention, and gave him some smelly canned food.  He was always in the house when I arrived.
Then he wasn't there.  He was still eating the canned food but we rarely saw him.  Turns out one of the neighbours that used to stop by to give him some attention, was now feeding him at her place, and letting him inside.
Unfortunately she did not want to keep him.  I tried to convince her that Nelson would be better with her than at our place, but it was in vain.
So last Sunday we brought him home. His safe place is in an under bed storage box in the spare bedroom/storage room/repository of all things that we don't know where else to put.  He has a litter box and food and water in there.  He ventures out a bit when he feels it is safe.  Tonight at supper time, the dogs were in the basement, and it was just Larry and I, and he wandered over and sat by the dining table, looking relatively relaxed.
Smudge seems to be pretending he isn't there.  Luna is managing to contain herself and stay when she is told.  Don't expect any pictures of Nelson and Luna together any time soon.   He is doing lots of 'wowwwwwwing'.  The spare bedroom is next to ours.  He 'wowwws' something awful a few times during the night.  Last night Luna was shut in our room and we gave Nelson the run of the house.  He still 'wowwwed' enough to wake us up.  He is quite a spooky, nervous cat, and I don't think he's really used to men.  It's going to take a lot of time for him to transition from a house with one old lady, to here with another cat, three dogs and four people, two of them being male.
If we move towards him, he usually just scoots back into his hidey hole under the bed.  It took a lot of coaxing to get him up on the top of the bed last night.  Funny though, the camera flashing a few times in front of him didn't seem to bother him. 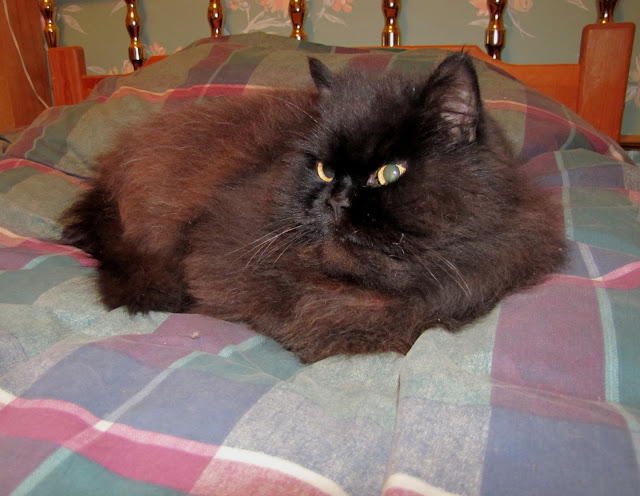 One day (and night) at a time.