The days of two farmers markets every weekend came to an end, so we were desperate to get away for a bit of a break.  The weather forecast wasn't so great, so we waited a few days, and then finally we and the weather were ready.  We had actually hoped to leave Calli at home ( I know, I know!), just to make it a bit easier on us.  That wasn't meant to be though, with David away working in California, and Meredith working and house, horse and dog sitting for our neighbours.  She'd only be at home here enough to feed April and Pride, let out and shut in the chickens, and collect the eggs.  So Calli and the poochmobile came along.
Just before we were ready to leave, I happened to look at the sheep, and realized that The Old Ewe was not to be seen.  Then I remembered that when I had shut the chickens in after dark the night before, I hadn't seen her with the other sheep then either.  Immediately I realized something was wrong.  When you only have a few animals, you get to know them well, and any slightly off behaviour sticks out like a sore thumb.  Three sheep grazing, and one laying down in another spot by itself, well it's enough to warrant a second look.  So into the field I went, and there was TOE in the barn by herself.  Head down, flanks sunken, looking, well, like one sad sick sheep.  I pushed her out of the barn and out onto some fresh grass.  Wasn't interested.  Her legs seemed weak, and she was holding one front one weirdly.  If I put her off balance or tried to move her too fast, she went down.  She seemed to be trembling a bit.  I was trying to figure it out.
I went in and dug out my sheep literature.  The B.C. government info lists a whole pile of main symptoms and secondary symptoms, and gives suggestions as to what might be the cause.  Nothing matched up.  Dug out my old 'Raising Sheep the Modern Way'.  Looked up salt poisoning.  Trembling and leg weakness were listed.  A few days before, I had put in a new salt block.  Nothing much other than a few tiny bits were left of the previous one.  The new one was getting lots of action, so salt overload was a possibility.  The cure was to give plenty of fresh water.  I added some molasses to some warm water, and offered it to the ewe.  She drank 1 1/2 to 2 litres.  I gently pushed her back into the field, and she eventually lowered her self down under a tree.  Meanwhile we just waited.  Well not exactly waited.  The zucchini got picked, the few pears that were left and half a bucket of the Fall raspberries got picked as well.  Didn't want to leave Meredith with a dying sheep.  A conundrum.  Here's our chance to get away, we were all packed and ready to go, but it didn't seem right to just go and leave a sick sheep behind.  We kept looking at her to see if there was any improvement.  Larry came in once and said he thought she was chewing her cud.  I went out to look.  No she wasn't.  But then lo and behold, a bit later I looked, and yes she was chewing her cud.  A positive sign! She chewed for a long time, looking totally normal while doing so, so I said let's go!
And we were off.
And do I know if it was a salt overload?  Nope, but seemed like a good possibility.  Needless to say, the salt block was removed while we were away.
Manning Park.
That's fresh snow on that there hill.  Some lovely fall colours on the few deciduous trees, which I totally sucked at getting a decent photo of. 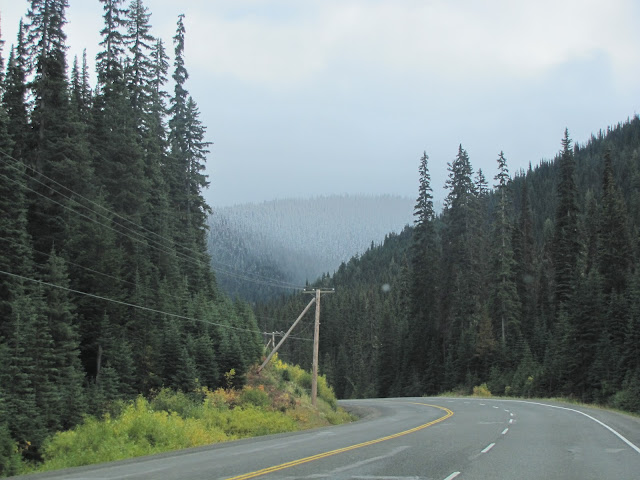 Since we were later leaving home, we didn't get as far as we had planned the first day.
The first night was spent at Bromley Rock campsite.  It's a government one, one of the few that was still open.  There was only ourselves and one other camper in there.  That's the Similkameen River right below us. 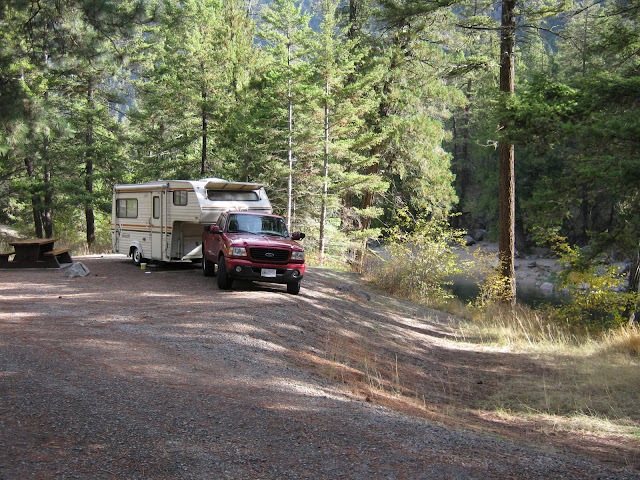 The dogs got some beach time that evening, and then the next morning.  Some swimming too, but the water was really cold, so it wasn't long before they were shivering. 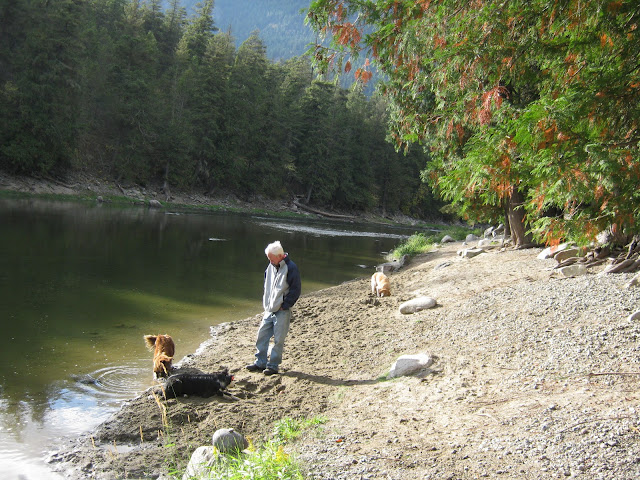 Calli stuck to digging in the sand. 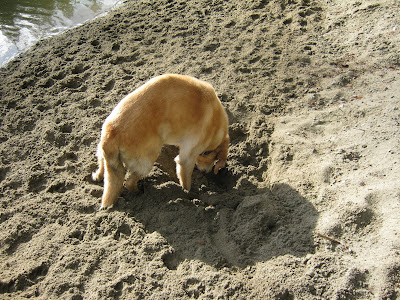 After the water time, I dug out Luna's basketball.  Figured since the campsite was deserted, she could chase the ball around.  Larry did comment that we'd better be careful.  If the ball went over the edge and made the wrong bounce, it would be in the river.  Luna sent it over the edge and then brought it back up.  The second time that happened, she came back up without it.
Damn!
I went to look and the ball wasn't just in the river, it was about 20 feet out, and heading downstream.  Right there the river was fairly smooth, but it was moving along at a good clip.  Just a little further downstream there was a back eddy, so I was hoping the ball would get caught in there and come closer to shore.  The wind was against us though.  It was blowing the ball farther out into the river, so it didn't get caught in the back eddy, it just kept on going.  Luna and I were following it along the shore.  She seemed quite concerned.  I kept telling myself that I wasn't going to take any drastic measures to try and save a $3 ball.  We kept on going.  Most of the river bank was big rocks and boulders that we were scrambling over. I kept seeing something ahead that I thought might send the ball into shore.  There were some small rapids. One time Luna swam out and got behind the ball and pushed it towards shore.  I encouraged her, frantically yelling 'push, push'.  One push was all she did. 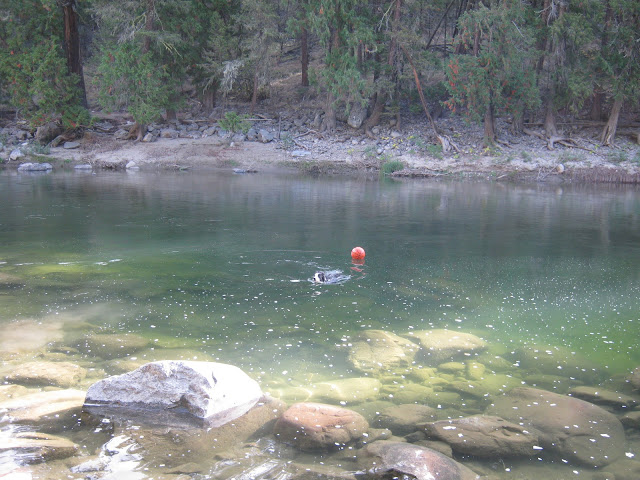 We kept on going, scrambling over the rocks.  I kept looking for something that might direct the ball closer to shore.  I found a long stick.  Finally I saw a rock that the ball was headed right towards.  I was hoping that it would pass on the shoreward side, but it didn't.  It did get caught in the water swirl around the rock though, and pulled in behind it, which directed it closer to shore.  I could see that the water was getting shallower, so picked up speed to get ahead of the ball, kicked off my shoes and socks and waded in, and voila! 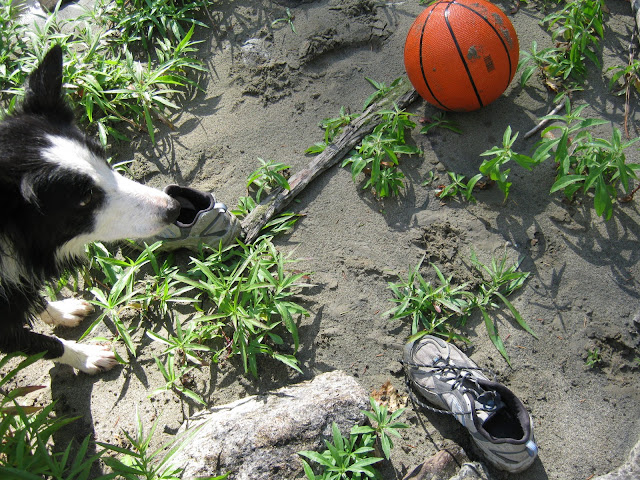 Meanwhile back at the campsite.....
Larry had walked the whole length of the site with the other two dogs, hoping to spot Luna and I down by the water.  He didn't see us.  He pictured me slipping and hitting my head on a rock.
I tucked the ball under my arm and Luna and I headed up the hill.  We were way past the campsite at this point, and came out at the edge of the highway.  Since I didn't have a leash, we went back down to the river and walked along until we got back even with the campsite.
All's well that ends well.  The ball went straight back into the trailer.
Oh, when we scrambled up the hill to the highway, I found two bright yellow Stanley crowbar thingies.
Score!
On to Keremeos.