April is still hanging in there.  Well actually she's doing okay, for an old lady with sheep dementia and failing eye sight.  Probably aren't many people that would still have her around at this point....oh well, no way to justify her being here, but she is.  Easier than sending her off to the great pasture in the sky at any rate.
So quite often we put April and The Old Ewe out in the hayfield during the day.
This is the view from the kitchen window. 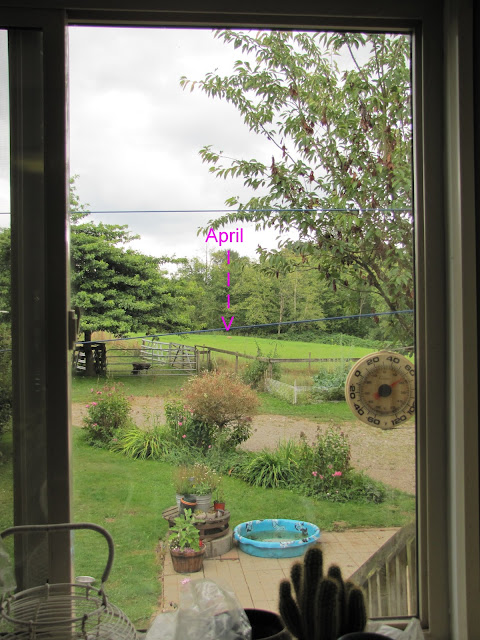 One day when we were blackberry picking, she wandered out with us.  That was fine, but getting her back wasn't so easy.  With the help of my knee against her neck or shoulder, and Luna's help or hindrance, depending on the moment, it's a slow process moving her anywhere. 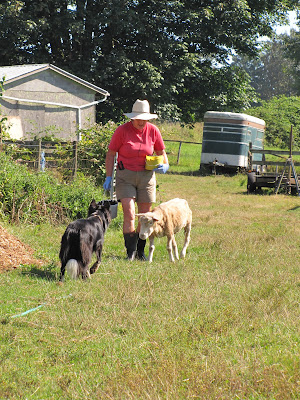 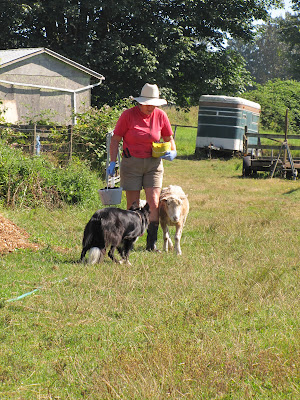 Note to self -
Lose 20 lbs.
Only allow yourself to be photographed in more attractive outfits
Buy a new bra or tighten up the straps at least
Lose 25 lbs 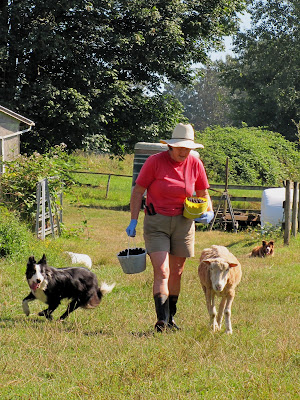 A week or two ago it was starting to get a bit dim, after supper. We'd forgotten about April.  I heard her baaa, (yes I can tell her voice from the others).  We were in the living room at the front of the house.  I thought she sounded kind of close.  When I looked out of the window, she was on the front lawn. She'd come out of the field, down the driveway and around the house.  She had a senior moment, and had got headed in the wrong direction. 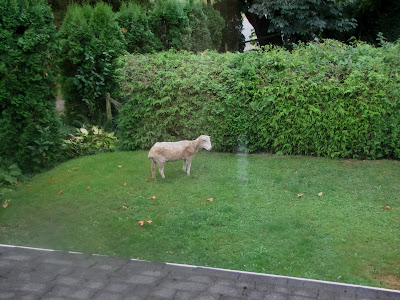 She wasn't quite sure which way to go next. 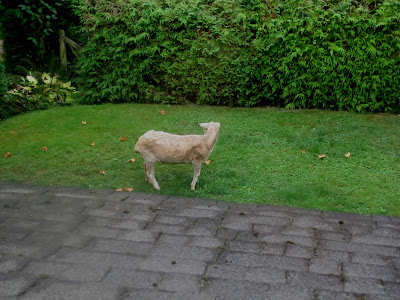 She did head in the right direction around the other end of the house, but the way was eventually blocked.  That piece of old railing is there to stop Luna running the fence line around the sheep field.  Well she still runs it on the other side, but for a shorter distance.  There are specific incidences that cause her to do that, which would take too long to explain here.  The herding people would probably be horrified that she gets the opportunity to do that. We do what we can to prevent it, but aren't totally successful.
There is a gate just off to the right past that green bush, but we had to go all the way back around the house to get to it. 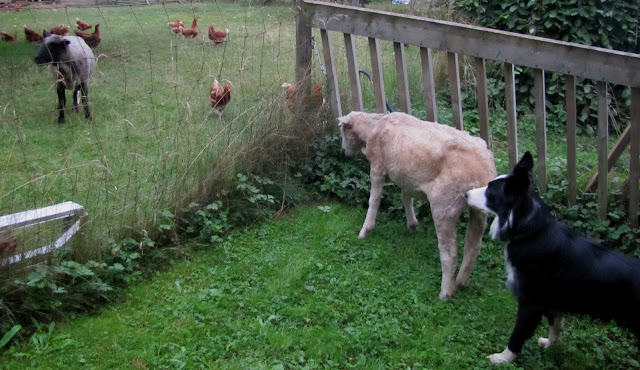 Two times in the last couple of weeks, April has bloated.  No particular reason, and in her lifetime she's probably bloated half a dozen times before.  I've only ever had one other sheep bloat.
Both times, by the time she got back to her field, she was flinging great gobs of frothy saliva around, or letting it accumulate in pools at her feet.  Not a pleasant sight.
Two tablespoons of baking soda in a cup of warm water seems to do the trick every time.  The struggle is getting it down her throat without lifting her head up and sending it into her lungs instead, but eventually I succeed.  The last time I could actually see her right side deflate as the baking soda did it's trick.
Not sure how much longer we'll baby her along, although we did buy a bag of sheep grain today:)
Oh yeah, April is 15 1/2 years old.
All told, 59 buckets of blackberries were picked!
Posted by Karen at 8:57 PM