Our next stop was Keremeos.  That was where we had originally planned on staying the first night, so the second day it was only an hour or so drive.
That mountain was across the other side of the highway, to the north.  Standing in the campsite, it looked twice as high as it does here.  We really felt like it was looming over us, and were hoping the big earthquake didn't hit while we were there.  Keremeos is in a narrow east/west valley.  The mountains to the south are just as high, and at the campsite the sun had dropped behind them by 4 pm. That's their shadow on the scree slope. 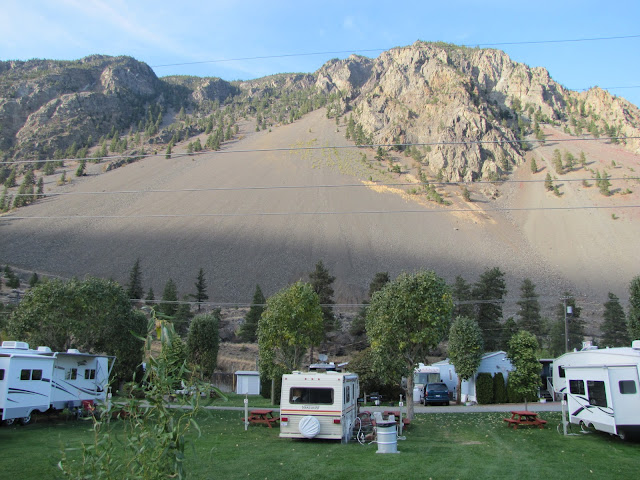 Campsites in Keremeos seem to be limited, I think this might have been the only one in town.  We tend to shy away from the private campsites, but at times you have no choice.  This one was fine for the one night we stayed there.  Great for the dogs, as where I was standing to take this shot was part of the old Kettle Valley railway I believe, and a good place to walk the dogs off leash. This was the only place we used the poochmobile, and Calli WAS. NOT. HAPPY.:(  She whined and complained loudly the whole ride.  A place new to her, so she wanted to be out and sniffing around.
So we stopped here on the way back and did the fetch/swim thing.  We were slaves to the dogs.
Still the Similkameen River, and it was still cold.  Don't Jake and Luna look cold? 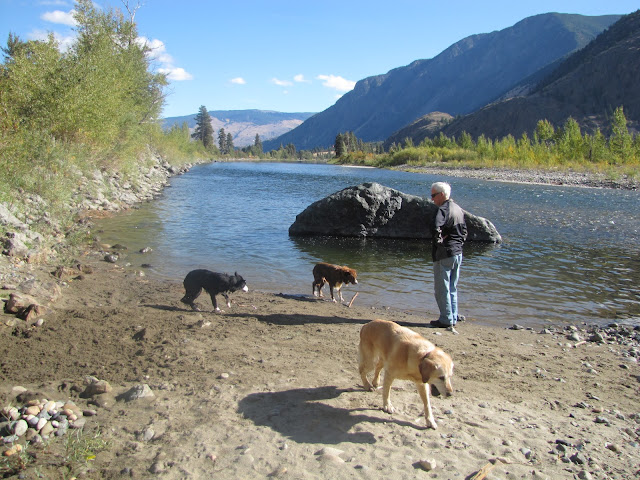 Calli had got a rock and she was happy.
We let her walk the rest of the way back.
Later on we left the dogs in the trailer and headed out by ourselves with the bikes.  Great to ride past all the orchards, check out the fruit stands.
See some really unusual fruit trees. 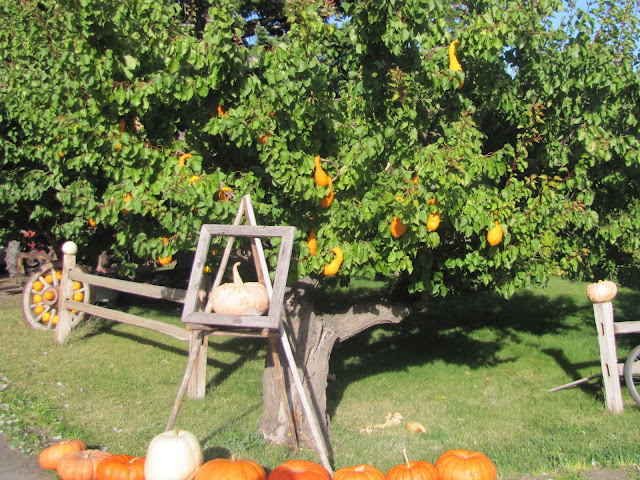 See that fence on the left side of the road.  Many of the orchards are behind 8' fences to keep out the deer. Makes them look more like a prison than an orchard.
Windfall fruit all over the ground.  It was making my frugal fingers twitch. We did 'steal' a peach, it was not bad. 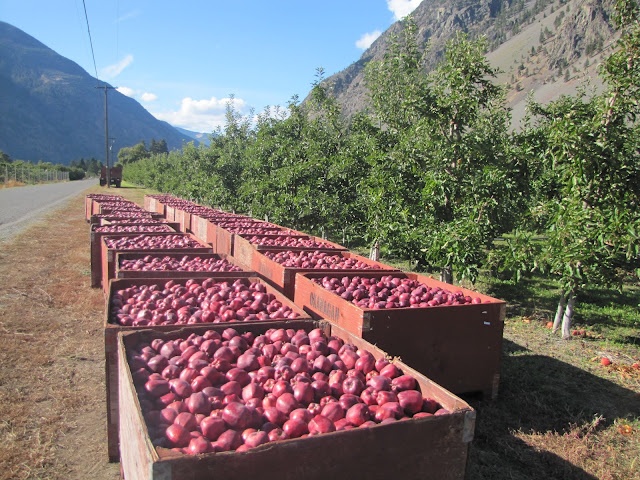 We rode through the 'downtown' area.  Checked out real estate, bought some snacks, bought some fruit.  That evening we went to the end of the campsite where there was a big grassy area.  Had a resounding game of fetch and soccer.  Far enough away from the river to be safe:), but close enough that a couple of hot collies could head over the dyke and into the river to cool off.
So yeah, really, as a campsite to be in with the dogs, it was pretty darn good. We didn't even put the leashes on them.  Straight from the trailer up on to the dyke/rail bed and away we went.
The campsite had pay showers.  In the end we decided to wait until our next stop, hoping for free showers. That was a mistake.
The nights were cold, and since we didn't have the furnace going while we slept (too noisy for me, who cares about Larry!), the batteries in the camera weren't very happy.  Maybe they were just getting old anyway, but in the mornings it took them a while to agree to actually work, and I missed some nice shots.  I took the batteries out one night and put them under my pillow, but that didn't help either.
And speaking of the furnace, it was so nice to have it. Not that Jake was very thrilled about it.  He was never quite sure were to lay to get away from it, what with the actual furnace in the middle of the trailer and a hot air vent at each end.
Last year at this time when we were camping, we found that the furnace wasn't working, despite having been serviced that Spring, and it made for some long cold evenings.
The advantage of staying in a private campsite.
Electricity!
Is that toast for me? 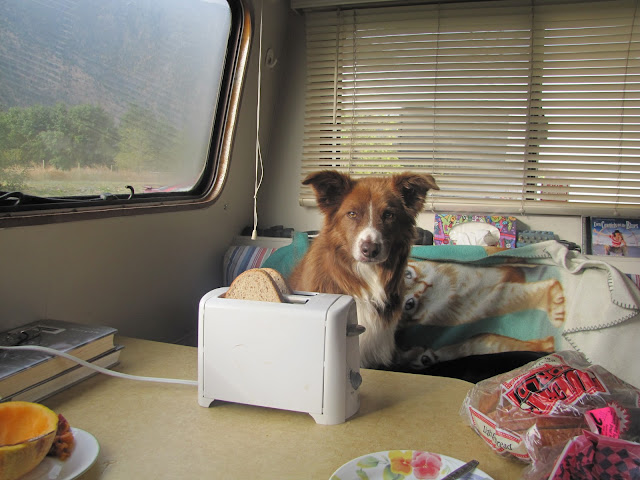 Because our trailer is so small, three dogs laying on the floor means you are constantly stepping over them every time you need to get up to get something.  So we'd get Luna and Jake on one seat, and we'd sit on the other, and Calli was either under the table or out in the middle of the floor, which left a bit more of the floor space bare.
On to Oliver!
Posted by Karen at 9:14 AM