Saturday's photos......
It's kind of depressing thinking about Fall already, but we sure are noticing the signs.  Spiders..... their webs are everywhere.  Thankfully spiders don't really freak me out.  I'd rather walk into a spider web than those leopard slugs doing their mating dance.  When we walk down the bush trail in the morning, the person in the lead is constantly breaking through the spider webs.  I don't really like to, but I'm not about to get down on my knees and crawl under them all.  I feel sorry for the spiders, all that effort they've put out, and their web is instantly destroyed.  It fascinates me how they build them across a wide space like that, I'd love to see a time lapse video, of which there is probably one out there somewhere.  This morning I picked up a thin stick and waved it in front of me as I walked along, kind of like I was conducting an invisible orchestra.  Luna wasn't impressed, in fact it really freaks her out.  Last year Larry did it with a bigger stick and her tail was between her legs and her ears were down.   Dredging up unpleasant memories from her past?.....who knows. 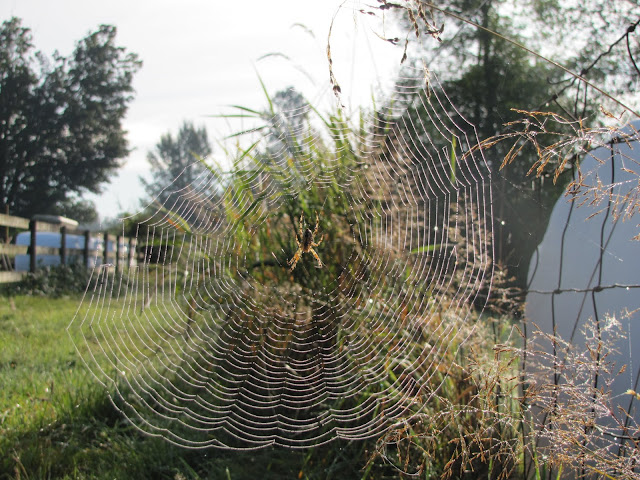 Some mornings the dew is incredibly heavy, and then you get the sun shining through it, and it's glistening like diamonds.  The dogs end up soaked, and the humans wear rubber boots.
Rubber boots and shorts.  We are just so darn stylish! 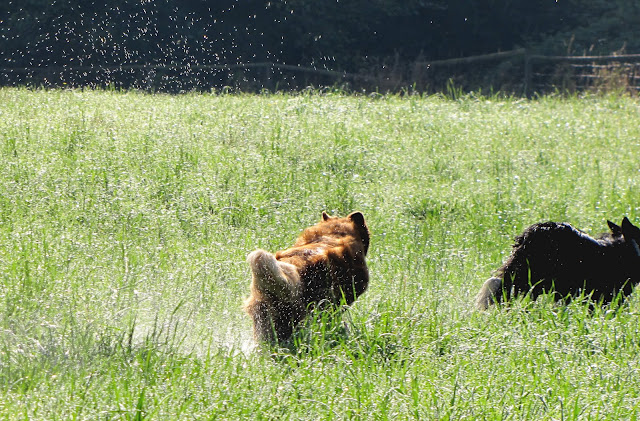 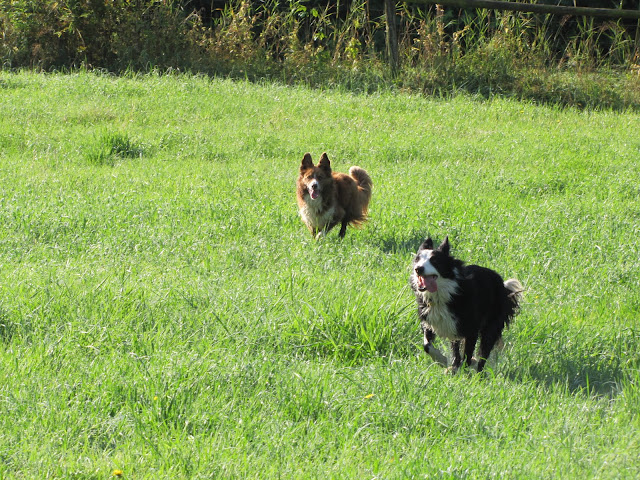 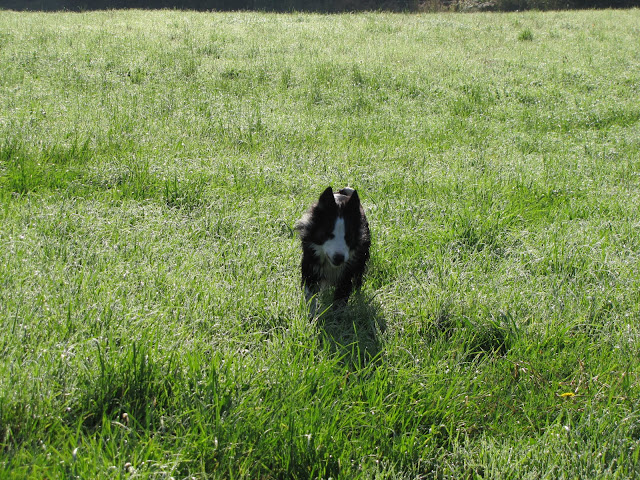 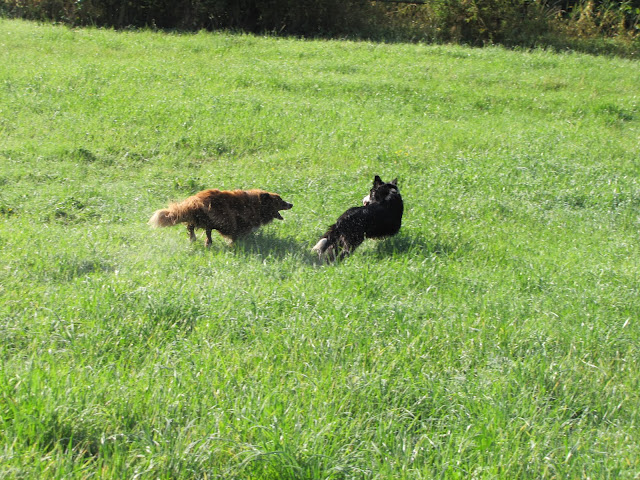 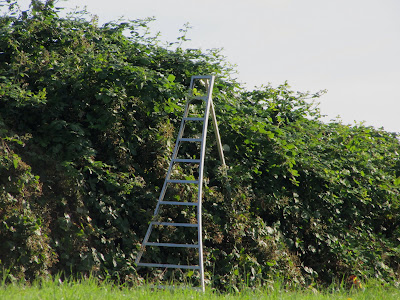 The zucchini are in full production now.  I love the brilliant colour of the blossoms.  The bees are working hard to make sure we are swamped with zucchini. 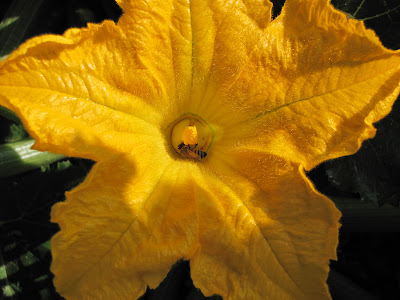 We have both yellow and green ones. 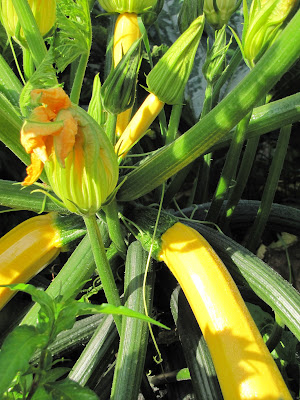 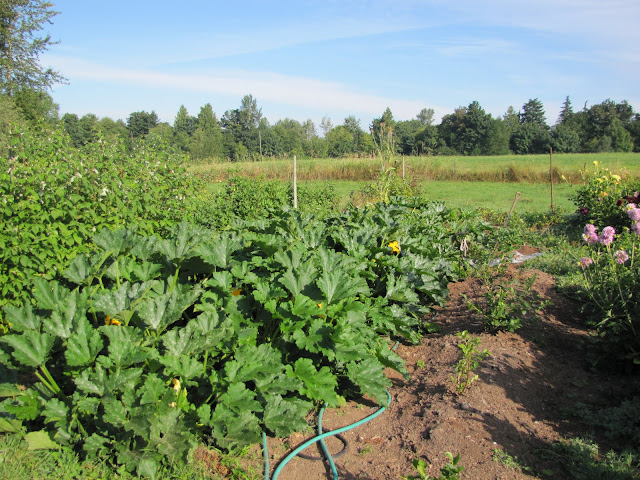 And most of the dahlias survived the slugs and some are now blooming.
That thing that is undercover....well that's a couple of blueberry bushes.  I had bought some gauzy drapery fabric, really really cheap, no more than $1 or $1.50 a metre, and was using it as blueberry netting. (The stuff is 10' wide).  Worked great, and I've been leaving it on in case any deer wander by and decide to snack on the new shoots. 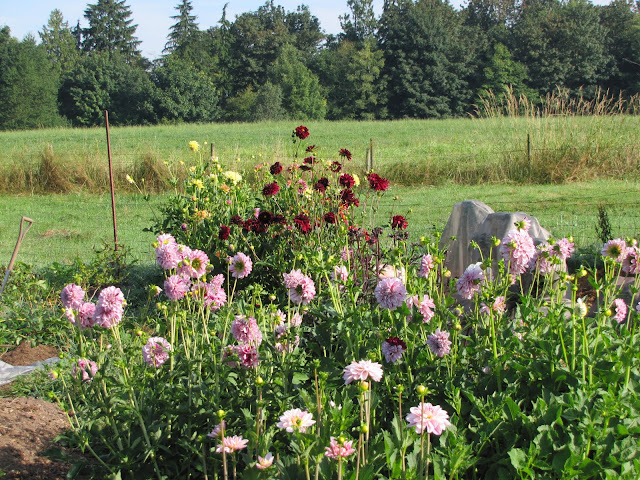 Buckets of blackberries picked - well only part of one, and then we put them in little containers and sold them at Sunday's market, so that doesn't really count.
Posted by Karen at 9:10 PM