TGIM or Catching Up After The Weekend

Our Monday is sort of like a Saturday.  It's a brief break after a busy weekend.  Can't afford to take much of a break though, as it's only five days until we are back at another farmers market.  It's a crazy time of year for  us.

Here's a couple of things that went to the market on Saturday.  A few weeks ago a man asked me if I had any men's aprons (ie aprons without flowers or feminine type designs on them).  I had a few, but he didn't find them suitable.  He came back the next week to look again.  Then it came up that if he could find suitable fabric, I could make some for him.  I've had lots of discussions like that with people, and rarely do they ever come back with fabric.  Imagine my surprise when this man came back to the market that same day with a bag of fabric.  He wanted five aprons.  Three of them looked like this.  Where that black band goes across the tractor, that's a pocket.  I hope the guys he's giving them to (his sons I think) aren't Massey Ferguson men:) 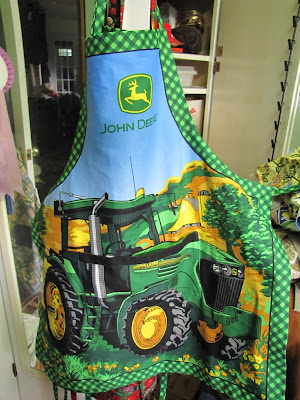 We sell potatoes in bags of two pounds.  This potato, (the photo doesn't do it justice) weighs 1 1/3 pounds.  So that potato and one half it's size in a bag looked a bit odd.  It was the only bag left at the end of Saturday's market, and the same thing on Sunday, but it did go finally near the end. 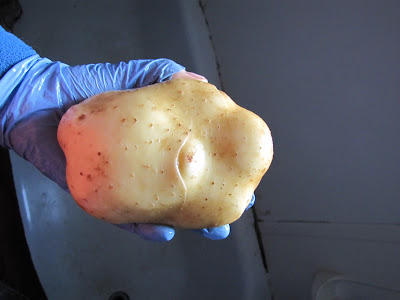 Yesterday I went to visit my mother after the White Rock market.
She's been moved to the palliative care floor as of last Thursday, which is in the older part of the hospital, and certainly is not as nice as where she has spent the last 10 weeks.  The physiotherapists on that floor had kind of written her off, saying that she had plateaued and was making no further improvement.  She was very upset to have been moved, and upset that she is no longer going to the morning and afternoon physiotherapy sessions.  A PT is supposed to be going to see her, but no one had been on Friday.  She has taken it upon herself to do what she can.  She found a set of parallel bars down in an alcove next to the elevator, and has been pulling herself out of the chair, holding onto a bar with her good arm, and walking sideways back and forth.  I got her to show me yesterday.  Then I got her to turn so that she was walking straight forward, as I wanted to see if she could do a decent walking motion.  Her right hand is on the far bar, and I've got my hand in her left armpit to help keep her balanced, as it would be much easier for her to fall this way.  You can hear me tell her to not do this by herself.  She has gone from needing two people to transfer her from the bed to the wheelchair, to doing it on her own.  She can get to the toilet herself (which is a huge boost to any one's dignity), and can do much of her own personal care.  Her left arm shows no signs of improvement, and maybe her left leg hasn't improved much, but her strength and ability to compensate has improved greatly.
It was a much better visit yesterday than the emotional one on Friday, but she is still saying how much she dislikes it there, and how she's going to get out.
Hopefully today I'll find out what is going to happen next.
Posted by Karen at 12:14 PM