They sell pigs at IKEA?  Well no, but they do sell closet systems, and we needed one.
Sometime near the end of last year I had suggested that we just make one whole wall of our bedroom a closet.  We have this piddly little closet, which is mostly useless to us. We went to IKEA to have a look, and liked what we saw.  We were told that if we weren't in a hurry, there was usually a sale in the new year.  In a hurry, us?  uhhh, no.  So in January when the flyer came out, we said we'd better get ourselves there.  Time passed and the 20% off sale was going to be over in a couple of days, so we thought we'd better get there, jiggety jig.
Unfortunately the getting there was no jiggety jig.  What with construction at the west (far) end of the Port Mann Bridge, and an accident on the bridge, the traffic was backed up up to 200th St., which is about seven miles east of the bridge itself.  After it taking us nearly half an hour to go three miles, we got off at the next exit, along with a line of other cars driving illegally up the right shoulder, and backtracked to the Golden Ears Bridge (toll bridge) and took the long way round.  A half hour drive had become an hour and a half.
We got it all figured out as to what we needed, and headed down to the warehouse to load it on our cart.  That stuff weighs a ton.  Thankfully though they do give you the weight of each box, and after some calculation we realized that to take it all in one trip would mean that our Ford Ranger was going to be seriously overloaded.  Two trips it was going to be.
That evening I was in the bedroom, starting to take stuff off the dresser so that it could eventually be moved out of the way.  I pulled it out from the wall, and that's when I realized that two of the electrical outlets, which was half of the room's total, plus a phone jack, are on that wall.  The phone jack was not biggy, but the outlets were.
What to do?
We mulled over all the options, and none of them were pretty.  Finally we decided we were going to cut out the back of the closet over the outlets.  We'd use a power bar and cut a notch so it could go under the base of the closet and reappear at the corner along the other wall, and be long enough to go under the bed, where the bedside lamps could plug into it.  The other wall has the bed on it, and there are no outlets there.  Bad planning by someone 50 years ago.  .
We figured that we would get the second load Saturday evening after the agility trial.  After all, when we hit the freeway after leaving Cloverdale, we were already half way there.  But, unfortunately it wasn't meant to be.  The trial ran so late that we would have only made it to IKEA 15 minutes before closing time.
That left us with Sunday morning.  Sunday was the last day of the sale.  We were aiming to get there at the 10am opening, but after making a stop at Home Depot, to get a long corded, flat plugged power bar we were 45 minutes late.
Those who do not go to church on Sunday mornings, go to IKEA.
Good grief:(
The line up at the restaurant was huge.   The line up at the cafeteria for  2 hot dogs and a pop for $2 was short.  Guess which healthy choice we picked?

I don't know if I was having hot flashes, or it is just too warm in there....whatever, it was just too warm in there.  Well there were just too many people in the store.
We managed to get everything we needed,  I hope.  While Larry was going through the checkout  hand over your life's savings line up, I bought us that healthy food.  Oh, and don't forget the healthy chocolate, 100g for $1, right here, just down from the checkout.  At the checkout we had to unload several hundred pounds of boxes off the cart so that the girl could scan the UPC code on a box that wasn't accessible otherwise.  I took my jacket off.  I had dressed lightly, there was nothing else to take off.  I pushed my sleeves up.  I gulped cold pop.  We headed to the underground parking to load up.  Thank goodness it was cool outside.  The freaking IKEA carts have four wheels that all spin.  Any slight slope and the cart slides sideways down the hill. Locking wheels would be a good thing.
Our dining room is piled with IKEA boxes.  They are easy to trip over.  Larry just did.  He said he pulled something. We'd better get this all put together before he seriously injures himself. 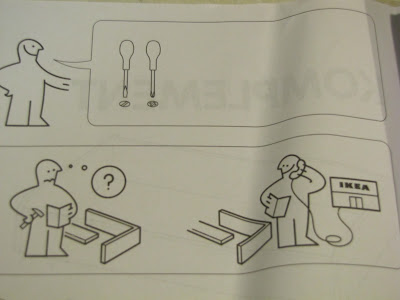 I had actually planned on taking photos of all sorts of heart shaped things for today's post.
Huh, wonder what happened to that plan.

Here's the only one I took.  Before we picked up the pruned off branches around the apple tree last week, I rearranged them.
Happy Valentines Day! 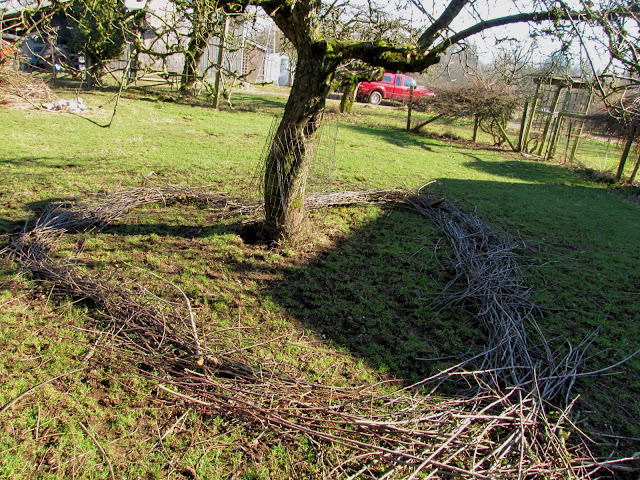