I mentioned last week that Larry had spent quite a bit of time pruning the fruit trees, which are now all done, and look great. That was what he worked on when he wanted to go outside and do something, but didn't want to start one of those difficult jobs. Now he's off to prune the neighbour's trees.
My 'go to' job has been to go out to the sheep barn and shovel out, oh, maybe four years worth of compacted sheep manure and hay.  When we still had lambs each year, it used to get cleaned out each spring before the lambs came.  Since we haven't had lambs for a few years, the urge to get it cleaned out hasn't been quite the same.  The barn is in rough shape though.  The walls are leaning out in some spots, some of the siding has been knocked off.  The sheep took out a small section of wall when something spooked them and they all tried to barge through a narrow doorway at once.  That's sheep for ya!
Anyway, to fix that barn, it needs to be cleaned out so that we can work on it properly, without have accumulated bedding pushing against the walls.
So what I have been doing is going out there most days and shovelling out at least two wheelbarrow fulls.  I figure there are between forty and fifty wheelbarrows worth in there.  I've almost got to the half way point.
The chickens like to hang out in there.  It's a dry sheltered spot, out of the wind. 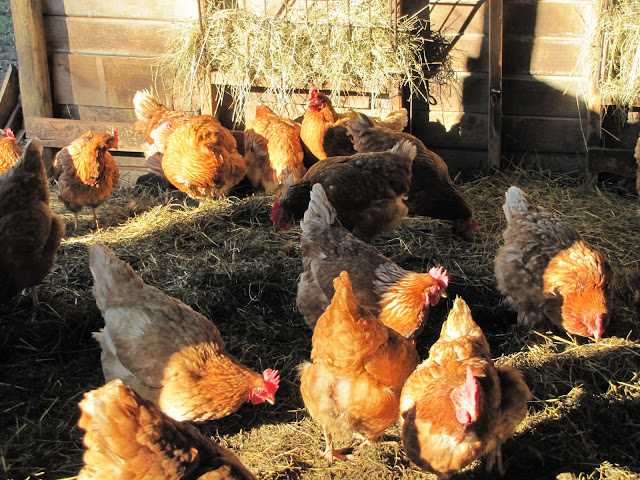 In the middle of the barn the pile is the thickest, probably a foot thick or more.
I say shovel it out, but there is no way to shovel it. The stuff is hard and packed solid. You have to use a pitch fork.  You stamp it in along the edge, at an angle.  Then you push the fork handle away from you like a lever.  Then you push it down towards the ground (more levering).  Next you push it in a bit further with your foot and lever it away from you again.  At this point if you are lucky you might be able to push it far enough that you prise a piece off, which you then put in the wheelbarrow, and then you start all over again in a new spot.  Yep, a mindless job.  Lots of time to daydream though. 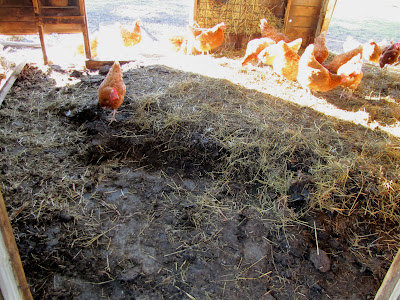 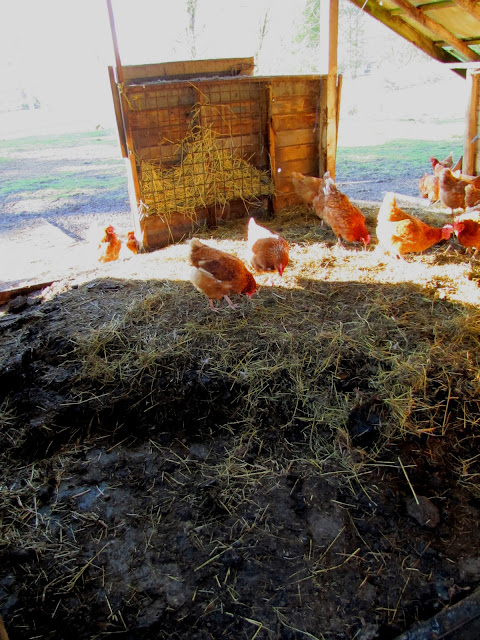 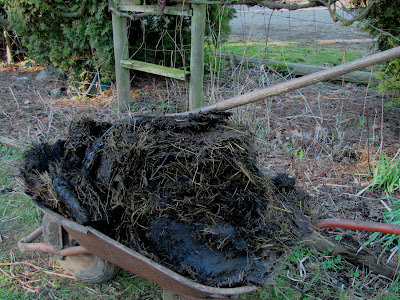 And then I mulched the raspberry rows with it.  That white stuff is ashes from the wood stove.  The leaves from the two broad leaf maples near the house are raked up and spread between the rows to keep the grass under control. 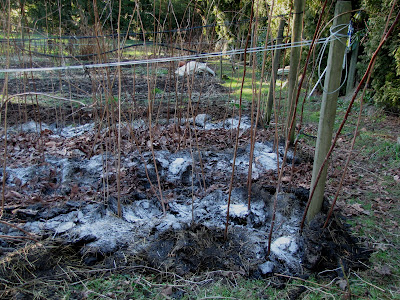 The raspberries are all mulched now, and so it's time for the fruit trees.
Gone is the branch heart, and now I'm working on a poop ring.
You put the mulch out at the drip line which is where most of the tiny little feeder roots are underground.
And of course there is always time for some ball playing.  Luna was out in the field with us, but when I went back to the house for the camera, she discovered her soccer ball in the garage.  You can just see her in the background with it, by the picnic table. 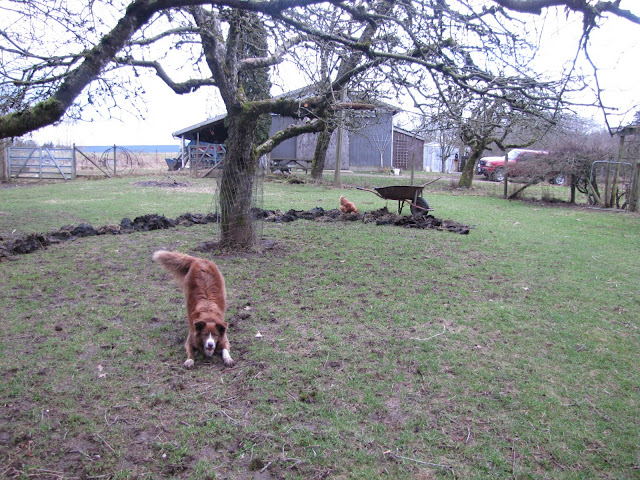 But before I finished she did come back to do a little chicken herding. 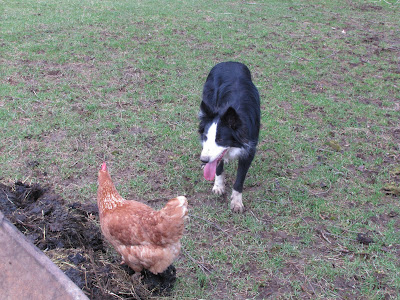 Only about 25 more wheelbarrows to fill.
Posted by Karen at 12:07 AM