Larry went to Otter Coop today, and came home with 14 bags of chicken feed, plus some horse feed.  Usually we store 5 or 6 bags down by the south chicken coop in a barrel, and the rest go in a couple of barrels in a metal shed not far from the north coop.  Eventually we have to carry some of those bags back down to the south coop, because they are the younger hens and lay more and therefore eat more, and that coop runs out of bags before the other coop does.
For the last little while there has been an empty barrel at the south coop, that we had been storing the chicken feeder in overnight when we were trapping the rats.  The light bulb came on (the incandescent kind, that gives you full light instantly), duh, why didn't we use that barrel to store another 5 bags of feed.  Brilliant idea.  It's bad enough dragging one of those bags out of the barrels to refill the feeder, never mind having to carry it an extra 150 feet, so to get rid of that carrying would be a great thing.
Usually Larry parks the truck near the top of the field and carries the bags down, as it is a hill, and tends to get slippery, and our little truck isn't four wheel drive.  With this cold weather we have been having, the ground had all been frozen.  So I said lets drive the truck down there.  I mean, why carry 10 bags if you can drive them there.  Another light bulb moment.  Unfortunately though, this must have been a CFL bulb, energy efficient, but slow to come to full brightness.  We noted that the ground was thawing out today.  It had clouded over and was warming up. (still waiting for that CFL to reach maximum brightness)  So Larry starts backing down the hill. Already as he is braking, the truck is sliding.  The top half inch of ground has thawed out, and it is sliding on the frozen ground underneath.  Too late now.  He slithers down to the coop.  We unload the bags into the barrels.  There are still 8 bags in the truck, weight on the back end, a good thing.  He backs past the coop to get to some flat ground, and to get a run at the hill.  Finally that CFL bulb is at full brightness.  We realize this wasn't a good idea after all.
First attempt he almost makes it.  Second attempt is worse than the first.  We discuss our options.  Do we get the tractor or the 4x4 pickup to pull the other truck out.  Larry opts for the tractor.  Then we remember the sandladders that David has from his landrover days.  Drag those down to the truck.  Gain a few more feet.  Then the truck is slipping on the sand ladders as it gets to the steepest part.  Attempt to turn one of the sand ladders over so there is more grip. Can't get the truck to even get a start on the sand ladder. Find out later we could have done things a bit differently, and it probably would have been successful. Makes your male offspring feel superior when they can tell you how it should  have been done. 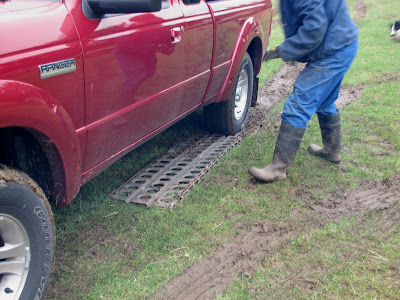 Larry gets the tractor, we hook a chain from one to the other, I get on the tractor and he is in the truck, and just a little pressure on the chain and the truck is out. 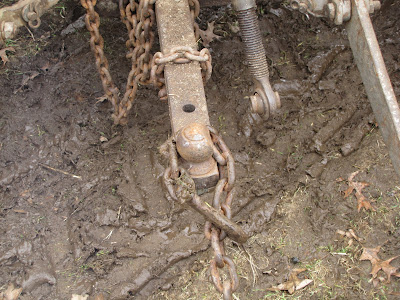 We had been going to take the tractor down there so we could clean out the coop and throw all the soiled bedding into the tractor bucket, but nixed that idea.  The tractor isn't four wheel drive either.  There were already enough mud tracks in the field. 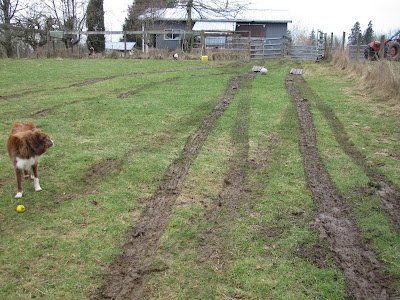 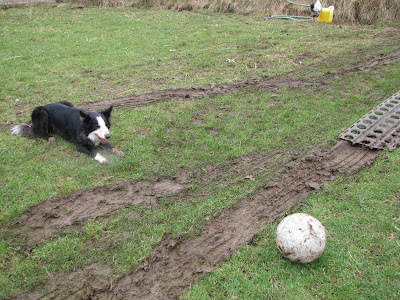 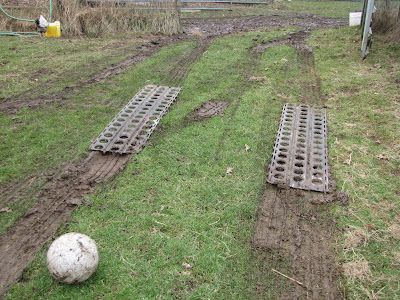 Both chicken coops got cleaned out.  I shovelled, and Larry pushed full wheelbarrows, slip sliding away.
Luna ran her soccer ball through the muck.  She's a girl that doesn't mind getting down and getting dirty. 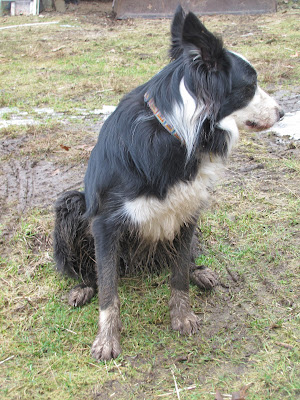 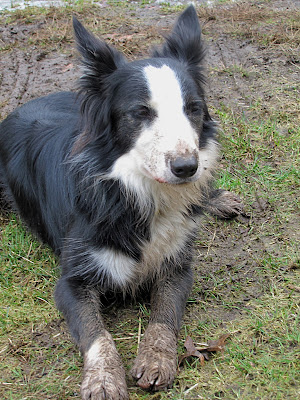 It wasn't anything that a good game of attacking the water coming out of the hose couldn't take care of though. 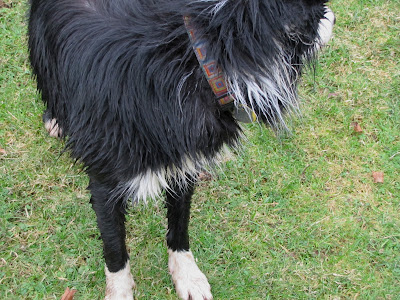