Fish and Chips on Tuesdays

At one point when I was a kid, I pretty well knew what we would be having for supper, depending on what day of the week it was.
Sunday was roast beef and yorkshire pudding, with roast potatoes and other veggies.
Monday was cold roast beef with mashed potatoes, baked beans out of a can, cabbage and carrots and/or peas or some other veggie.  A meal I still enjoy now.  There is just something about that cold sliced beef together was a forkfull of mashed potatoes and beans.....
Tuesday was homemade fish and chips.  The fish might have been rock cod that my dad had caught around the breakwater at the end of the White Rock pier.
Wednesday was roast chicken and fresh baked buns, dipped in the drippings in the pan the chicken was cooked in.
Thursdays, well there my memory fails me.
Fridays we had a stew, which included split green peas, which turned into a mush and coated everything in green.  I thought it was disgusting.  At one point my mother blended it all together, so instead of vegetables and meat coated in green,  it was just green mush.  More disgusting, and I can remember being nagged to eat it.  At some point along the way, Friday's meal turned into liver and onions and fried tomatoes.  I think I liked that.  Which is probably why now when I am making dried liver treats for the dogs, I end up eating quite a bit of it myself.
Saturday was quite often a barbequed chicken purchased from the local Safeway.  My dad loved chicken, (and canned pears).
I'm pretty sure that most meals had a good complement of vegetables added, my mother was pretty fussy that way.
So what got me thinking about all this was that the dogs got fish for breakfast today (Tuesday).
Well actually they were fish heads. 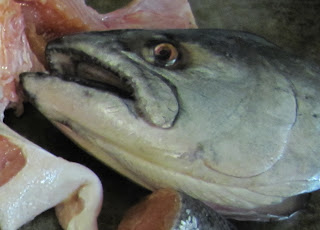 When I chucked Calli's out on the front lawn, she sniffed it, and then checked around the grass as though to say, isn't there something else *better* here, that maybe she had missed seeing.
Jake got right into his in the garage.
On the back lawn, Luna took a long time eating hers.  In fact I had a shower after feeding them, and she was still eating it when I got out, and she was laying down while she was doing it.  It took her way longer to eat that than it does a chicken quarter.  I was impressed, maybe she will get fish more often.  Luna eats fairly fast, I am always trying to get her to lay down and hold the food in her paws.  She usually prefers to stand up and toss it around in her mouth as she chomps on it.
When we headed out for our walk, we took a couple of buckets, as the salmonberries are just about falling off the bushes, they are so ripe.  We picked two ice cream pails full.
For dessert the dogs had salmonberries.
Doesn't that just sound so good for breakfast,
salmon heads and salmonberries? 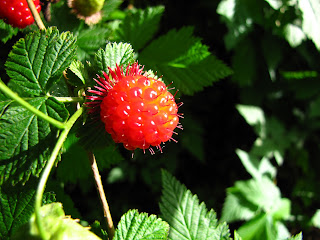 Rather them than me.
Posted by Karen at 2:07 PM