Here's some shots from the top of the grandstands of the 6 agility rings.  It was a lunch break, so there wasn't much action.  I so wished I had taken these photos yesterday when it was a beautiful day, and the white peak of Mt. Baker in Washington State dominated the background of the second picture.
Today started and ended quite nice, weather wise, but we had some rain in between. 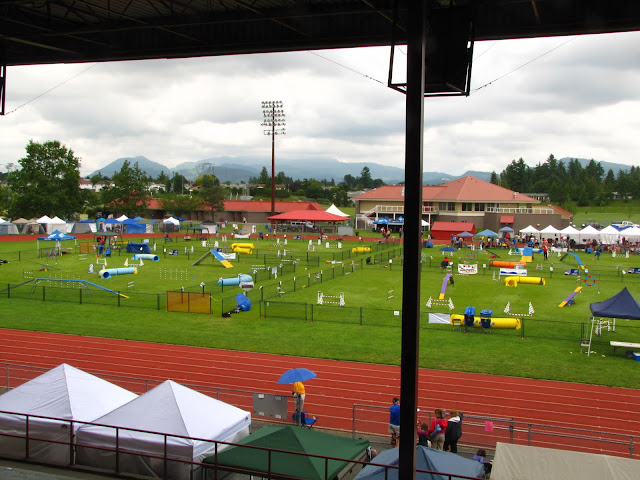 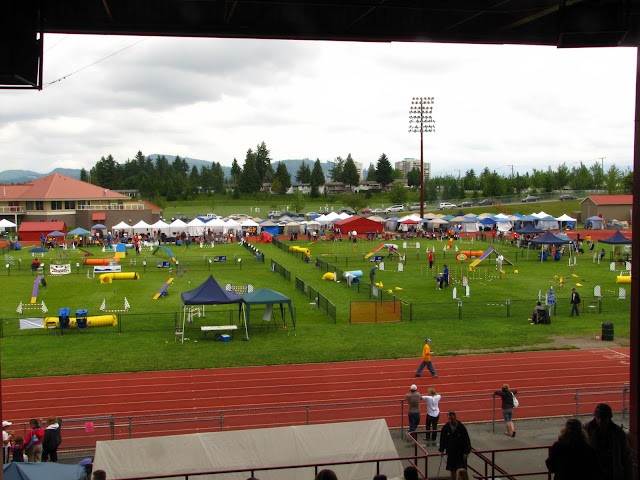 Today things kind of fell apart.  In our first class, it was all going great, including Jake going over the teeter with no problems.  I wasn't even thinking about it, and he hit the dog walk and bailed off half way up the up plank.  Put him back on, did the same thing, 5 times in total, and who knows how much longer it would have gone if I hadn't elected to take the 20 fault 'non completion' penalty and move on.  That was right before a tricky bit, and I was a bit flustered at this point, so then messed up the tricky bit and he got a 20 point 'off course'.  Add to that the amount we were over time and he got about 75 penalty points on that run, leaving us with 25 points.  Yuk.  Compare that to the 115 points he got on the same type of run yesterday.
The next class was jumpers, so there are no dog walks or teeters in there to worry about.  I had meant to put my cleats on, but forgot, and when I did remember, didn't think I had enough time.  I wasn't too worried though, as I had been fine in the first class, and the grass was still dry at this point.  So what do I do but slip, and right at the tricky bit while I was doing a front cross.  I am laid on my side on the grass, and can see Jake on the other side of a jump.  I tell him to jump, which he does (good boy Jake!) and I manage to scramble to my feet and we continue on and finish clean and under time.  Yay!  84 points to the good on that one.
The last class was gamblers, with a tricky gamble that was tight for time.  He did great in the opening, getting three and a half (we ran out of time) mini gambles.  We were close to the start of the final gamble when the buzzer went, but he decided to take another tunnel.  So valuable time wasted, and then he took the second obstacle of the gamble wrong, so we were whistled off.  I don't think we had enough time at that point to get it finished anyway, as one of the obstacles was the teeter, and he isn't terribly fast on that.
There were 32 dogs in his division, and yesterday he finished 2nd in jumpers and 5th in the standard and gamblers runs.  At the end Saturday he was third overall in his division.
Today he was fourth in his jumpers run.  At the end of the weekend he finished 8th overall in his division, 2 placings off the podium.  Darn, he would have looked good up there! 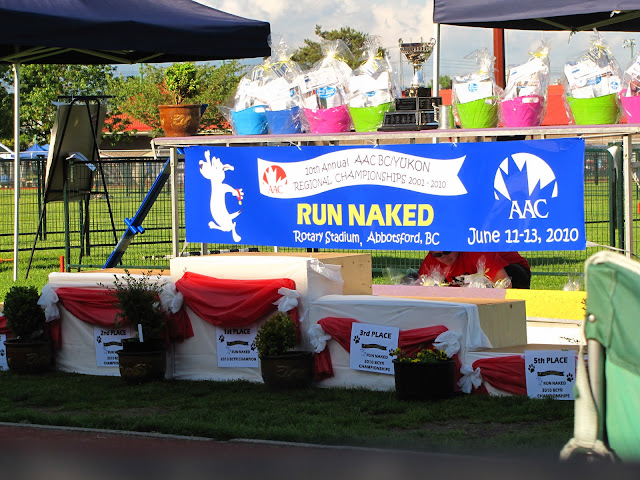 Last year he finished in third place:)  Anyway, he ended up with about 428 points, so not too bad, and easily qualified for Nationals which are being held at Spruce Meadows (Calgary) in August.  I think we are going!
Those Shelties make good lap warmers 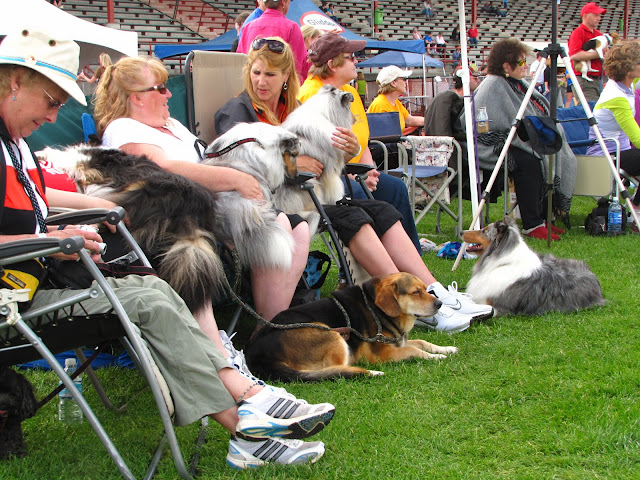 It was mostly sunny at that point.  Jake kept working their way so he could lay in the shade.  He was one tired dog.
We were watching the finalists in Steeplechase. That was a fun class added with a $500 prize to the winner. It was exciting to watch.  There were some amazingly fast dogs. 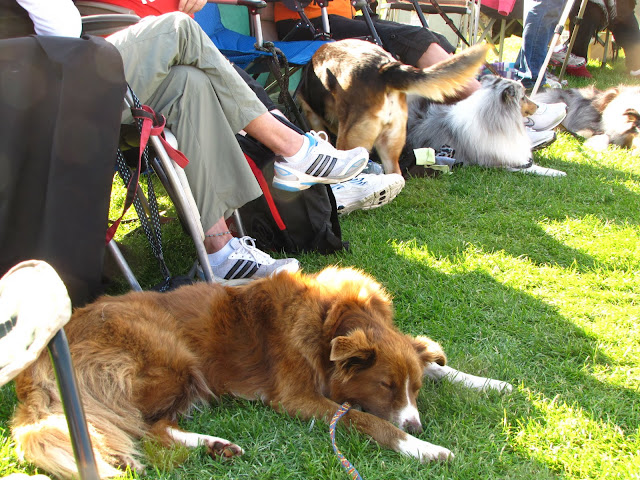 A seat with more of a view, at the closing ceremonies. 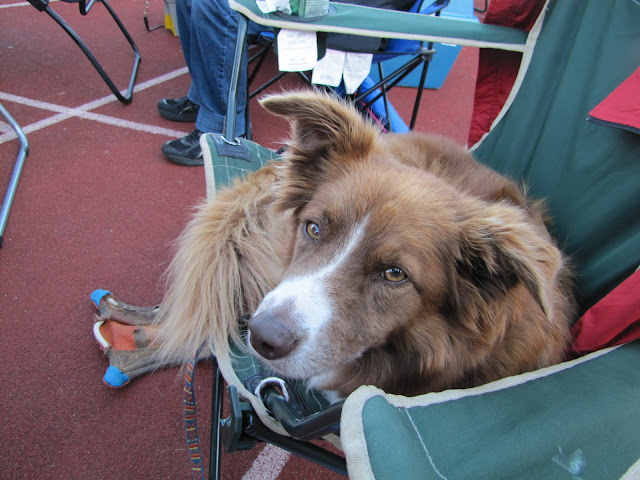 And with his Nationals Qualifying ribbon 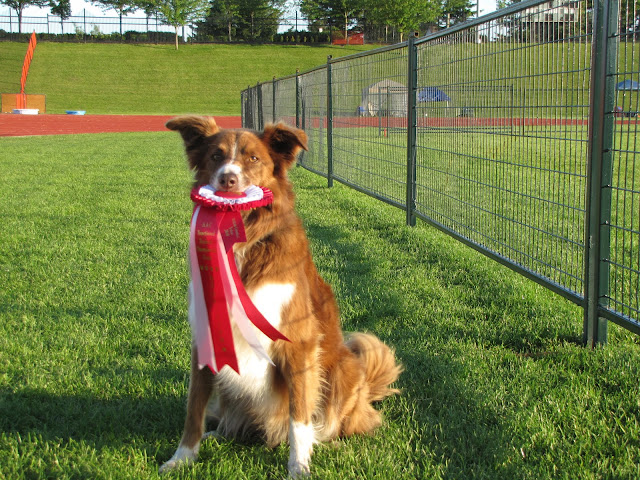 And with buddy Kozmo 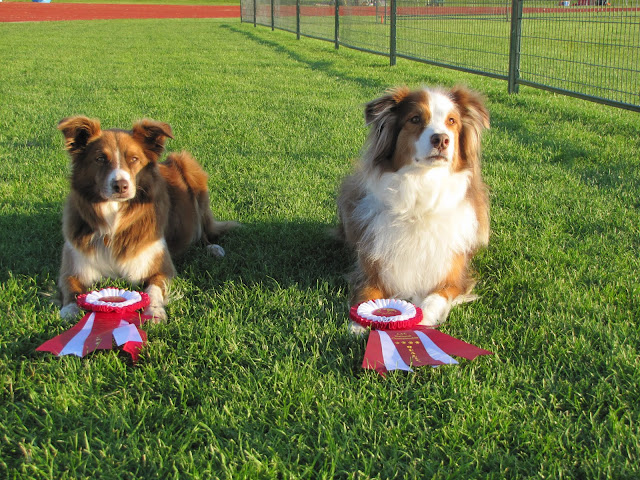 But those ribbons are really meant to be toys, aren't they? 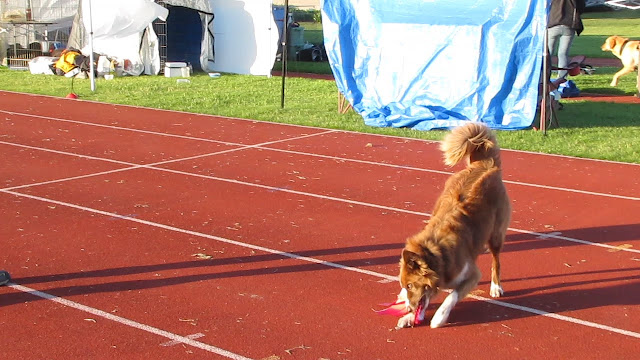