At War with Nature

Seems that it wasn't that long ago that I was talking about 'glorious rain'.  Well okay, enough already, go away.  We've had plenty or rain, the weeds are growing like mad, the slugs are having a slugfest, and we're fighting a loosing battle.  We have way too much grass, and as soon as the hot weather hits, we will be cutting hay.  The ground will probably still be soaking wet, which makes it harder to get the grass, which is really thick and long, to dry.
Buy chance on Sunday evening I walked up to the orchard/new garden area where I have a long row of dahlias planted.  As I got near the end where the field starts, the poor dahlia shoots were covered in slugs.  How far do think you have to fling a slug to be sure it won't find it's way back?  Anyway, I had a slug slinging party.  Tonight I went up there again, and picked a handful off, took them over to the edge of the garden and tried to squish them under the heel of my boot.  The ground was kind of soft, so it was hard to 'pop' them all.  How's that for a visual? .........shudder.  So in the end I went back to slinging them.  When I checked the row of peas and beans, there were slugs there too, so more got flung.  Something, probably a slug, totally demolished one of the squash I had planted.
Next thing probably the deer will find their way in there and started eating the raspberries.  So far so good, but I figure it will happen sooner or later like last year.  We did get a start on raising the perimeter fence, but that job got kind of sidelined.
I have been finding a few egg shells around, so the crows are finding some eggs somewhere.  We aren't getting as many eggs as I think we should from the north coop, although those hens might be starting to molt.  Tomorrow we won't let them out quite so early.  Hopefully when they get out, if they are laying elsewhere they will be desperate to get there, and we can follow them.  The problem comes when there are more than two hens heading in different directions, since there are only two of us.  There is at least one crow's nest in the row of douglas fir along the property line of the south chicken field, and no doubt they have babies to feed.
I accomplished a decent amount of sewing and jam making today.  Did take a break late this afternoon and we took the dogs down to the dyke.  The water was a bit higher today, maybe a combination of the tide being in, the rain runoff, and the spring runoff in the Fraser.
My picture taking basically failed other than these three.
We were throwing toys where there is an artificial channel dug out. Larry threw Luna's toy right to the other side.  She isn't always the best at retrieving, but we were quite surprised that she managed to find it over there.  The only thing was, she wouldn't pick it up and bring it back. And then she wouldn't come back without the toy either.  She just sat and stared at us. 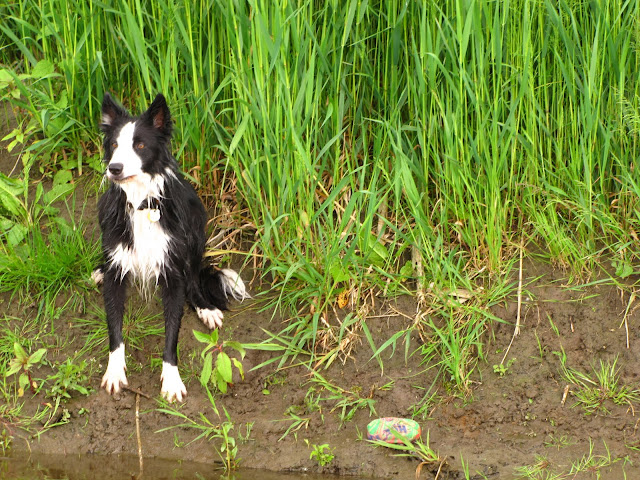 This is the weirdest picture, it looks like her head is too small for her body.
Finally we had to head up to the top of the dyke and almost out of sight before she swam back, leaving the toy behind.  So then Larry threw a rock that landed near it, and we were able to get Jake to swim over there and bring it back.
Good boy Jake! 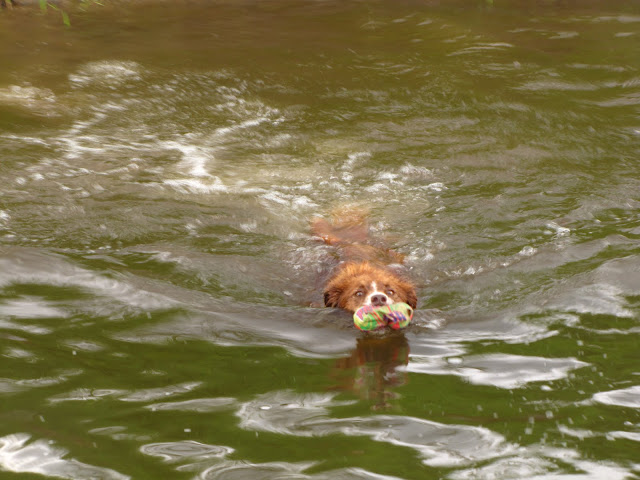 He looks a little bug-eyed though:)
This Mallard drake kept his eye on us 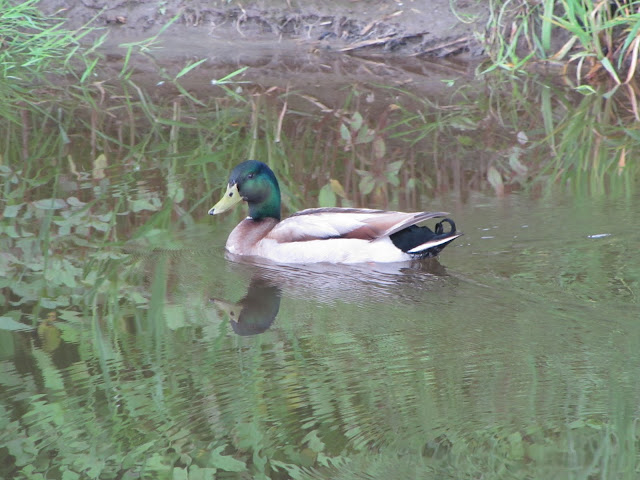 At least it didn't rain much today, but tomorrow sounds miserable.  This is June?
Posted by Karen at 11:53 PM