There was a lot of cackling going on in the north chicken field this morning.  I had noticed at one point that most of the hens seem to be hanging around close to the coop, and I heard a raptor call close by.  This time when I looked I could see some dark silhouettes in the cottonwood tree right behind the coop, and when I got closer, I saw this: 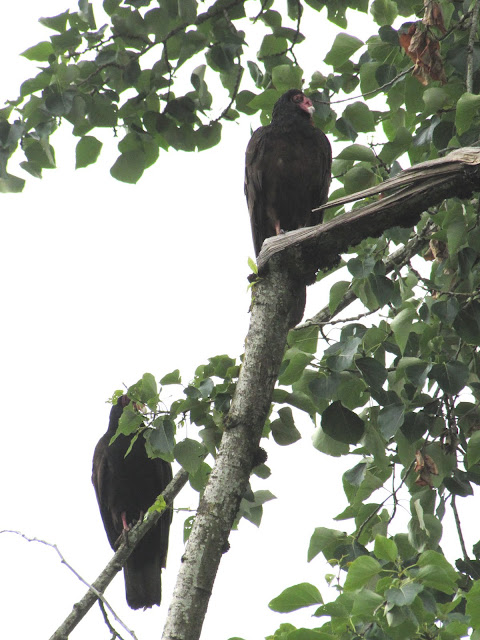 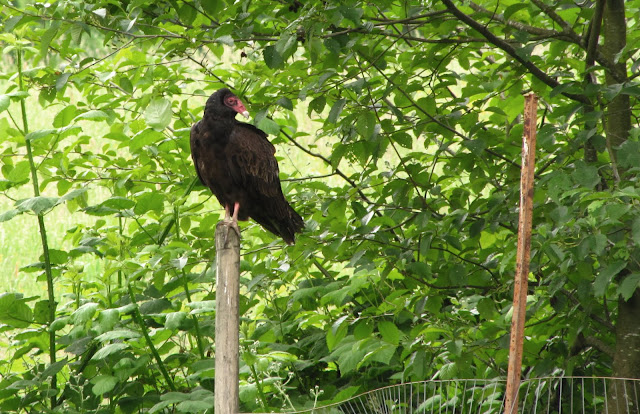 In fact there were 5 Turkey Vultures, three in the tree, and two on fence posts close to the coop. 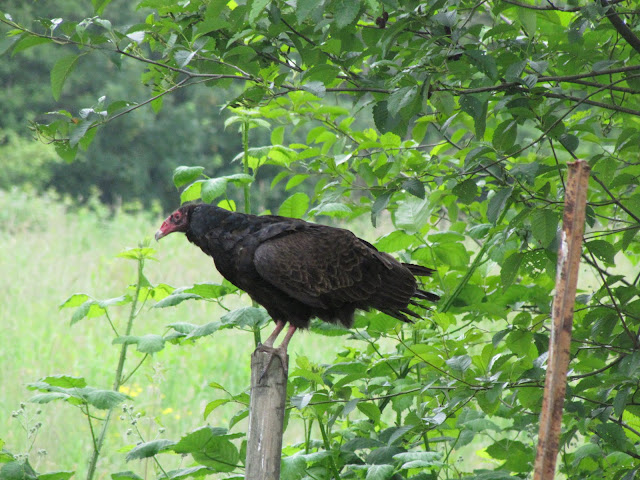 The ones on the fence post flew off when I got close.  I got to about 50' away from them.  They have a big wingspan, but aparently they are not strong flyers.  There's lots of interesting information about them here. 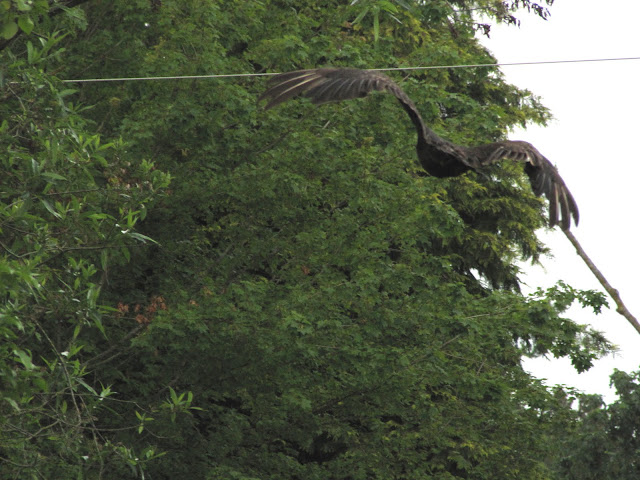 The only time we have ever noticed turkey vultures around here is when there is something dead.  Once, for some unknown reason, there was a dead deer in our back hayfield, and the trees along the edge of our bush were just loaded with vultures.  A couple other times there has been a dead calf nearby.  So I knew there was something dead close by.  I have never seen them hanging around when there has been a dead chicken, but that is what I found.  I'll spare you that photo, it wasn't pretty, and fit the description of the vulture's eating habits perfectly.  But...what killed the hen in the first place?
So a little wandering along the fence line found this hole... 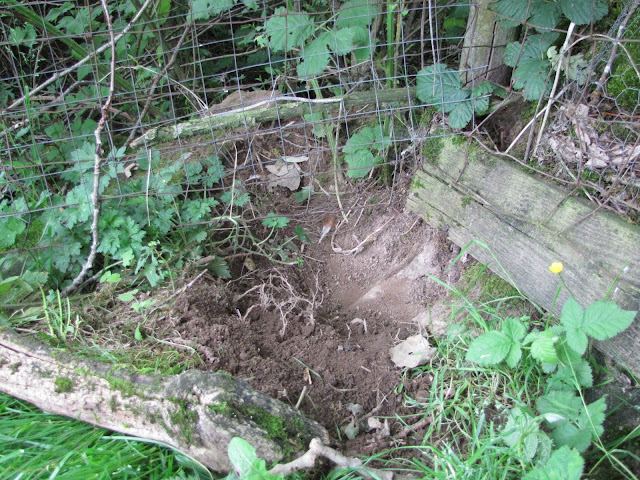 And then this hole.  Why two holes, I don't know.  Maybe the first one wasn't big enough, as it was right next to the trunk and roots of the cottonwood. 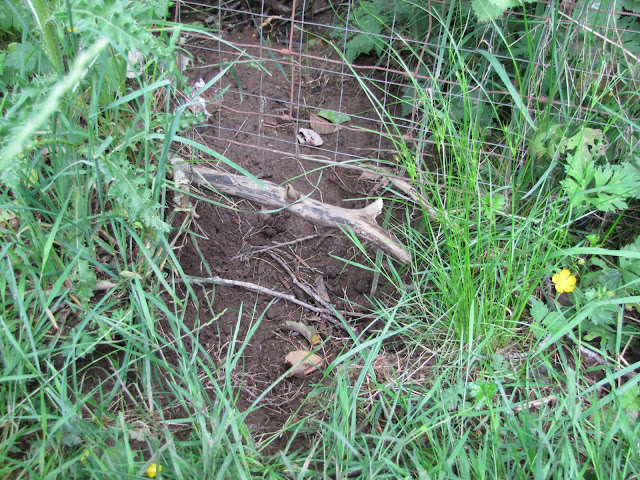 Maybe the coyotes were now too fat from feasting on our chickens, so needed a bigger hole. It looked like it has been there a while. The dirt was packed down on the other side of the hole. This is the same fence line we worked on way back in January. We've made it difficult to get over the fence, so now they are going under.
We wandered around and found a few piles of feathers.  We can only hope that they all came from the same hen, but I doubt it.  I'll do a head count tonight to check the damage. 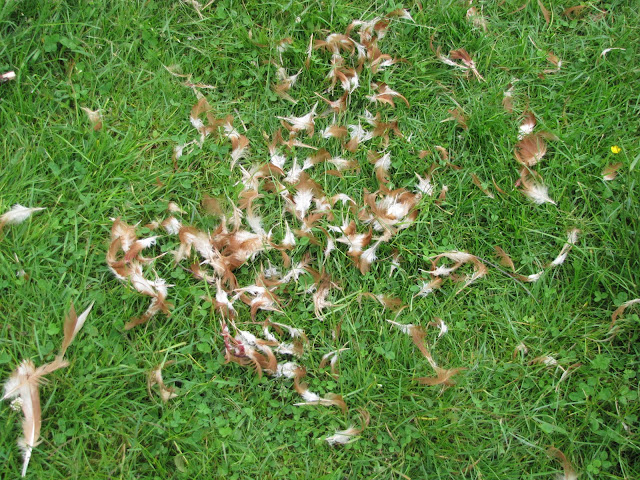 We filled the holes in with some big rounds of firewood, and we'll have to try remember to do frequent checks of the fenceline. The grass has got so long in that field (damn rain) that we can't really see what is going on out there.
Larry got the weadeater out and did along the fence line, and then got on the tractor and mowed all the grass.  At least now we'll be able to see things better out there. 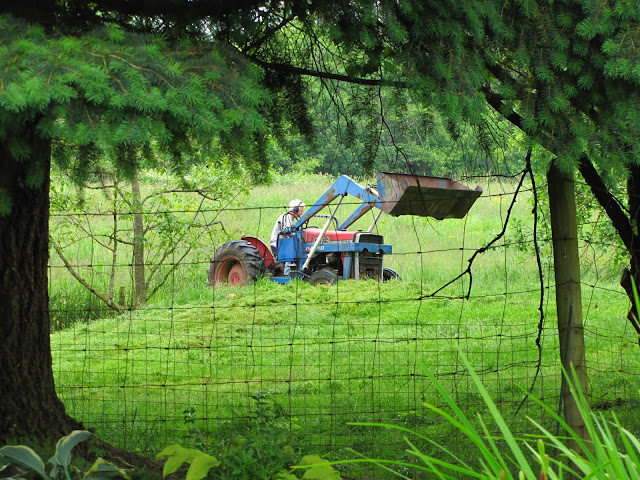 Tonight's update.
Unfortunately that chicken coop didn't get closed up last night.  I thought Larry had done it, as he kept talking about how there were still some hanging around outside, so I just assumed that he would shut the door when the hens were all in, and for whatever reason, it didn't get done. So now we are wondering if something actually went into the coop during the night.  The door is very small, but a coyote or raccoon could have squished in there.  The reason I am wondering that is that an awful lot of chickens did NOT want to go in the coop tonight.  A whole bunch of them were planning on roosting in the evergreens along the fence line, and a few were perched on the top of the sheep barn wall.  There were a few that refused to be herded to the coop.  It was really weird.  Anyway,  we managed to knock all that we could see out of the trees, and carried the rest that refused to be herded to the coop and shut the door.  I counted them and there are five missing from what we  had in there a month and a half ago.  We might have missed one tonight, so will see if there are any wandering around outside in the morning, and will check the fence to see if there was any new action there.  Sometimes this whole free range ( and ours really are free range) chicken thing can be just really frustrating, and expensive both material and time wise.
Posted by Karen at 7:17 PM