This year I decided to be a bit 'selfish'.  Well, depends who you ask I guess.  Anyway, our free weekends are almost over now, what with the farmers market season getting underway.  We have been in a few agility trials this winter and spring, but from now on we will be pretty limited to what we can enter.  As it happens there is a trial in Cloverdale this weekend.  Today I was at the market in Abbotsford, but tomorrow was free, well sort of, so I sent in our entry.  The only thing was, I had to figure out how to 'treat' my mother for Mother's Day.
As it happened I had to take her into Vancouver on Thursday to see her rheumatologist.  I decided to make an afternoon/evening of it.  So after the doctor's visit we took a drive to North Vancouver and Lynn Canyon Suspension Bridge.  It is a long time since either of us have been there. 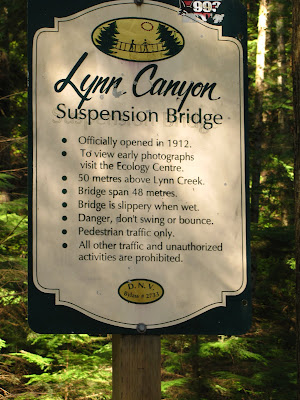 I kind of wished though that we had been going there on Friday. 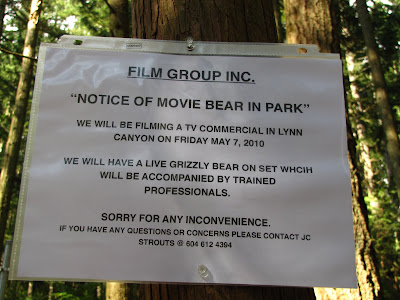 I wonder if it was this bear? 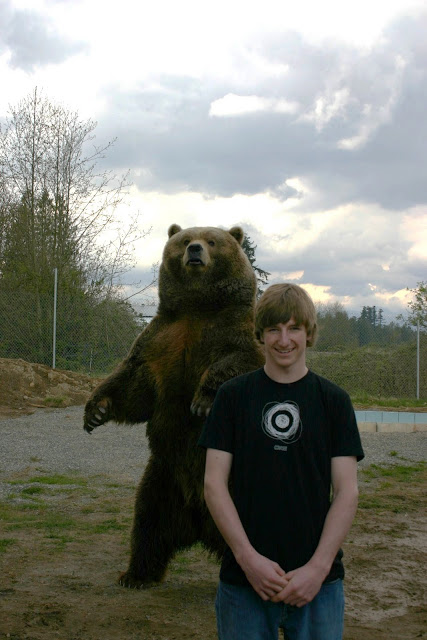 This is not photoshopped.  There used to be an animal trainer that lived a mile or so from us, and had several large bears, including this Kodiak Grizzly, on the premises.  There was an electric wire between David and the bear, and the bear had been asked to stand on his hind legs.
But, no bears on Thursday.
So I sent my mum off across the bridge 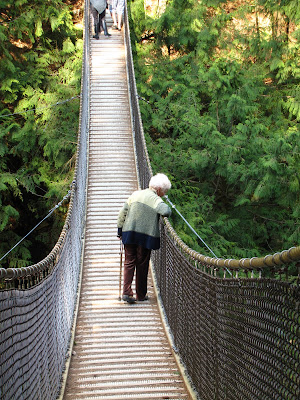 The view was really something from the middle of the bridge.  Not somewhere I really wanted to hang out though.  It was quite windy in the middle, and the bridge was swaying.  I was feeling a bit uneasy. 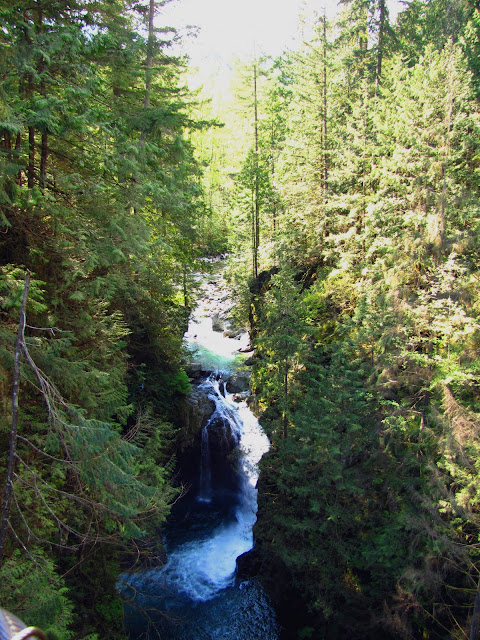 I preferred looking back at the bridge from solid ground on the other side. 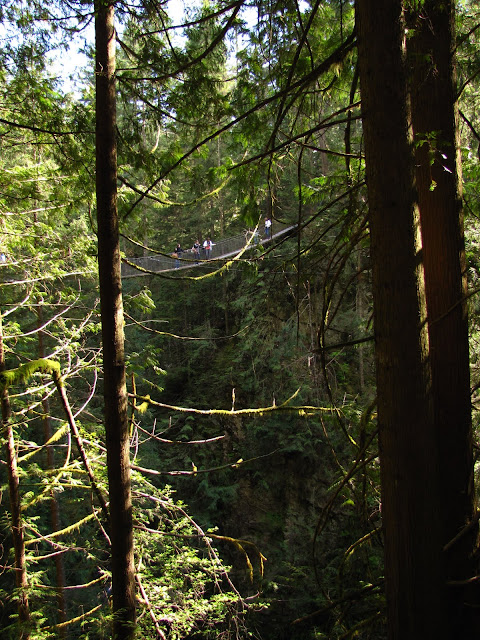 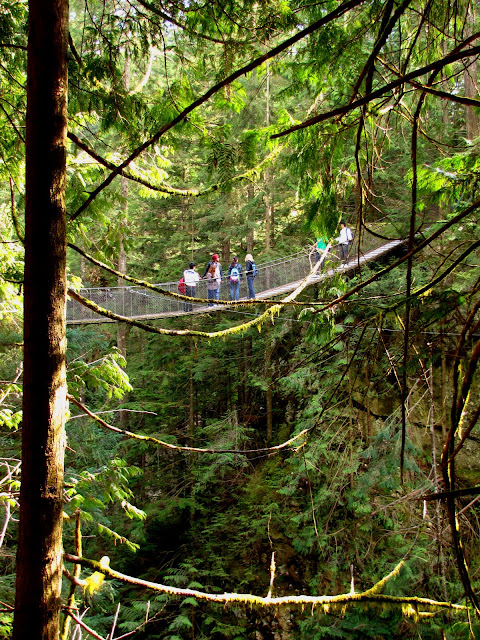 And then we took a stroll down the boardwalk 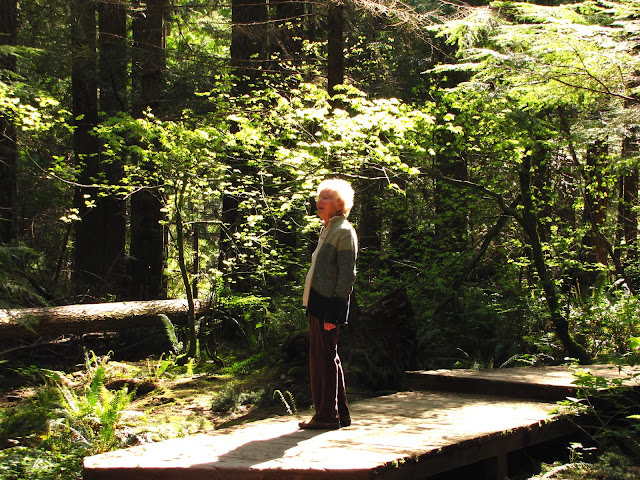 On the way back the bridge was much more crowded, and after we got to the other side, some big guys started jumping up and down in the middle.  Sure glad I wasn't still out there.  I might have screamed:( 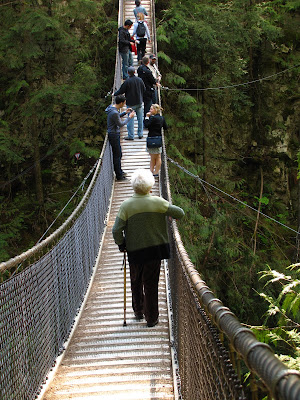 We sat outside the closed concession and chatted 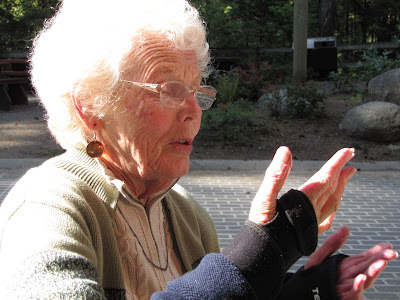 By that time it was the middle of rush hour, so we had to find something else to do until the traffic was quieter.  We drove to the Cleveland Dam and the Capilano Reservoir. The view to the Lions was great. 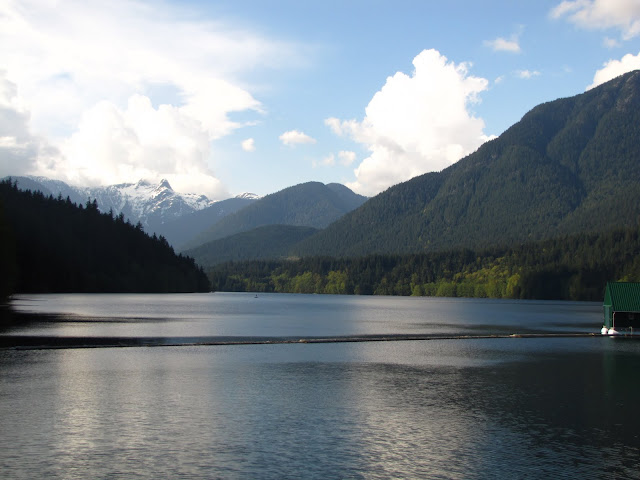 There were loads of people, and loads of dogs.  Despite being a park, and complete with the usual 'dogs on leash' signs, the only dogs we saw on leash were the ones most likely to not have a decent recall; a shiba inu, a pair of beagles, and a cocker spaniel.  The rest were all loose, and were mostly minding their own business.  It was kind of nice to see. 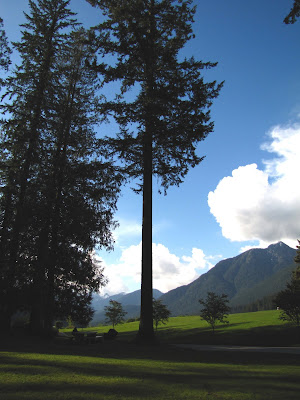 It was a nice day out.
Hope all you mothers have a nice day on Sunday.
Wish us luck at the agility trial!
Posted by Karen at 11:01 PM