It's been a week and a half since we brought the new hens home.  They have settled right in, and you'd think they had been here for a lot longer.  Considering they hadn't been outside until they came here; well after the initial trepidation of stepping outside into a brave new world, they haven't looked back.

When we let them out in the morning the first thing they do is put their heads down and start pecking at the grass.  Nothing like a little fiber for breakfast. 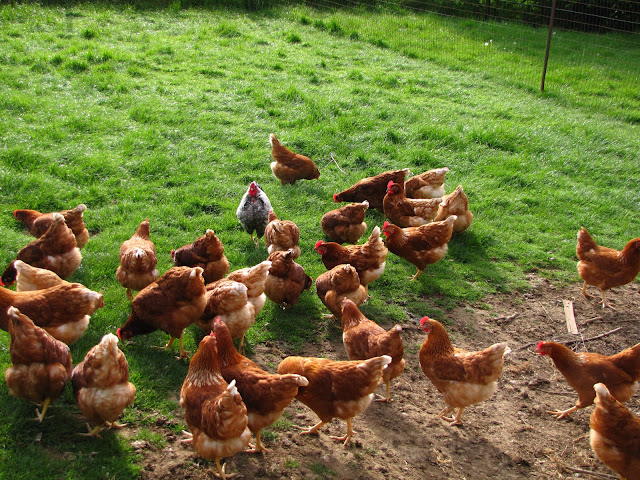 A few had already started to lay little eggs by the time they came here, and the rest are quickly getting into the swing of it.  Tonight I collected 27 eggs from those 60 hens.  Right now we have got them penned in a smaller part of the field.  I want to 'train' them to lay in the chicken coop rather than wandering down the field and picking a spot under a bush or in the ditch which is what happened last year. 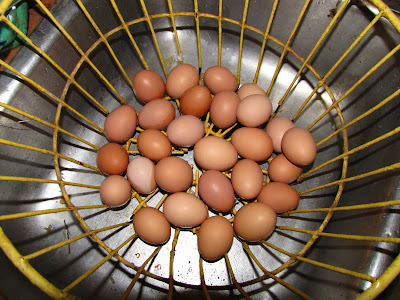 I missed a funny shot this morning.  There were three hens in one nest box, and all three of them were facing out, so it looked like a three headed fat hen.  By the time I had run and got the camera, one had left and the other two had rearranged themselves. 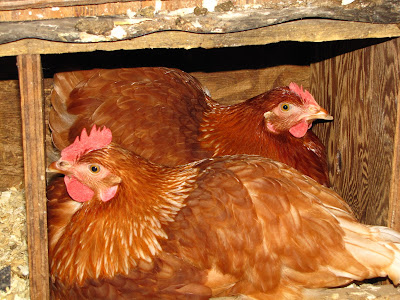 They are having a great time having dust baths.  If you haven't seen chickens having a dust bath, click here.  The hens have created that dusty hole all by themselves.
Yesterday I heard the rooster give a warning cry.  I was working in the vegetable garden so I looked over to see what he was looking at.  He was stood there with head up high, as were the two hens he was with.  I laughed when I saw what they were concerned about.  On the other side of the fence in the long grass I could see a rabbit sitting on it's hind legs (I assumed)  as I could see just it's head and long ears over the top of the grass, peering back at the chickens.  Of course by the time I got the camera, the rabbit was gone.
Later this morning, there was a hen cackling in some cedar trees in the sheep field.  Then I realized it was up the tree.  When I went close enough to see, there it was about 15 feet up on an old suspension type bridge that went from one cedar to another and used to lead to a tree fort that has since been ripped down.  Another race for the camera, and another shot missed.   I guess I need to have that camera with me at all times.


Unfortunately this 'little yellow hen', who would be 5 years old this summer, does not seem to be doing well.  If any of the hens came close to being pets, she would be the one. 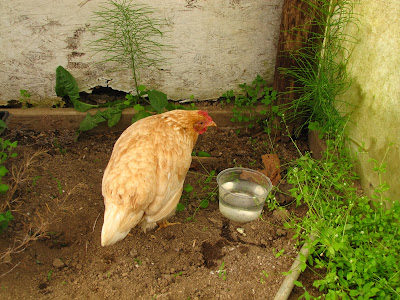 Five years ago two hens went broody (wanted to hatch their eggs), so we let them sit on some.  Three weeks later, we ended up with one hen with three chicks and one hen with one, which was the yellow one.  Before we got Luna, that little yellow hen would always magically appear if we were doing gardening anywhere.  After the arrival of Luna, well she found it too much to have a border collie hanging over her every move, so she didn't come out of the chicken field as often.
We are coddling her a bit, keeping her seperate during the day, and hoping for a full recovery, but I have my doubts.  Age may be catching up with her.   One of the other chicks, 'the little orange hen' is doing fine, but she was never as sociable as the yellow one.  The other two turned out to be roosters, and they are long gone. 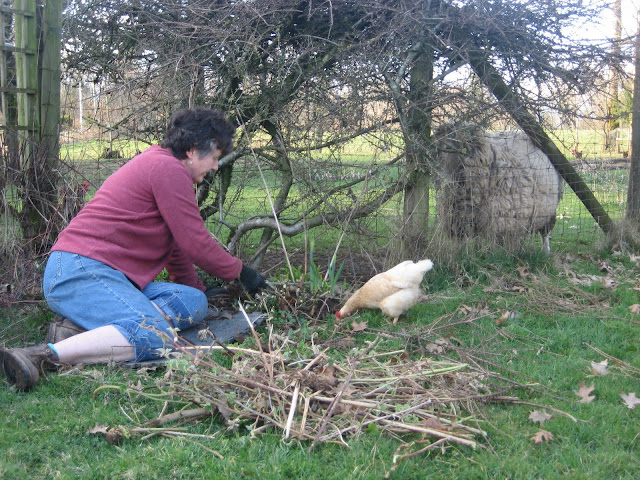 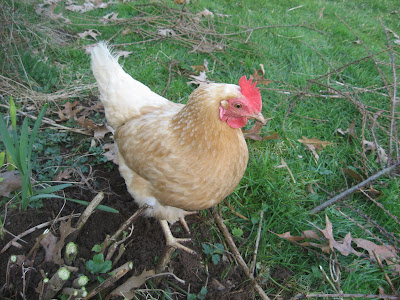