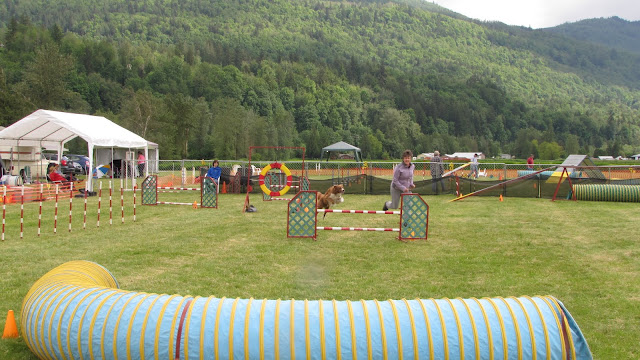 On Sunday we headed out to Yarrow and the Chillidog Trial.  In other years participants were allowed to camp out there, but for whatever reason the parks department is no longer allowing it.  Not that we have ever done that, but maybe this year we might have given it a try.
As is quite often the case, the weather at that trial can be a real mixed bag.  Thankfully there wasn't too much rain on Sunday, but the wind was wicked cold.  The sun flashed out the odd time, but by the time you had shed a few layers, it was back behind a cloud, and the layers went back on.

Luna and Larry finally had really nice jumpers run, and their first Starters Jumpers Q.  I've got to remember to stop talking while I'm filming:(


Here is a Masters Standard Run with Jake.  Nothing brilliant but I was happy with it.  For those of you that don't know anything about dog agility, a dog starts out in Starters, and as they accumulate Q's (qualifying rounds) they eventually move up to Advanced  and then to Masters.  A Standard run has all the equipment in it, whereas a jumpers just has jumps, tunnels, tire and chute.
Larry and Luna are still having weave issues.  At times it is like she doesn't even see them when Larry is running her.  I took her in one class and got a great entry to the weaves, although she popped out at the 9th pole.  Her contacts also need a lot of work, as well as Jake's.  He used to have a great 2on 2off, and somewhere along the line I have really messed him up.  We are going to set some equipment up at home and try to get some practicing in.

Luna just got one Q out of 5 runs, and Jake got 3 out of 5.  Yesterday he decided in one class that he didn't want to go to the bottom of the teeter.  He does have reoccurring teeter issues.  Since it was Snooker, and the teeter was the 7 point obstacle, he went on it three times.  The first two times he touched the yellow contact zone by a toenail and then bailed off the side, and then last time he didn't quite get there before he bailed and we were whistled off.  He still had enough points to Q though.  The next class I had better luck with him on the teeter, although it was a different teeter in the other ring.
Our little spot at the trial.  The chair in the corner was the warmest spot.  Luna needs work on willingly going into the x-pen or crate. 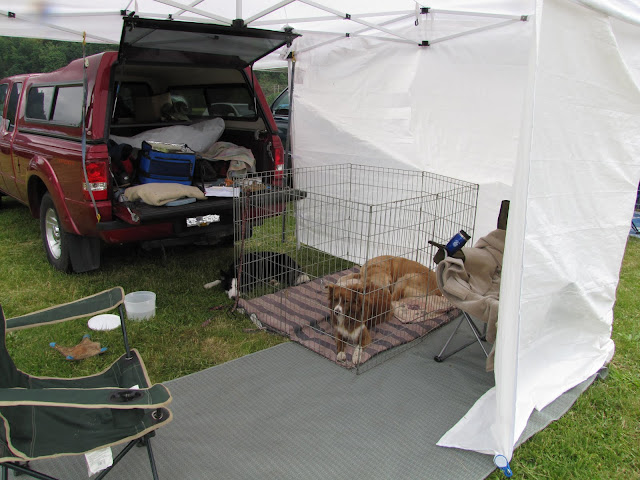 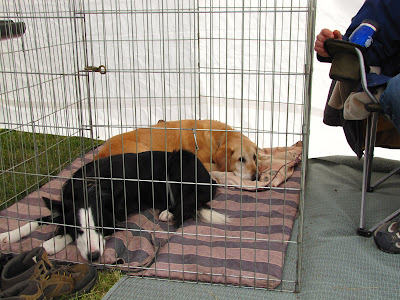 Another rain cloud rolling in.  Larry is out there helping to course build. 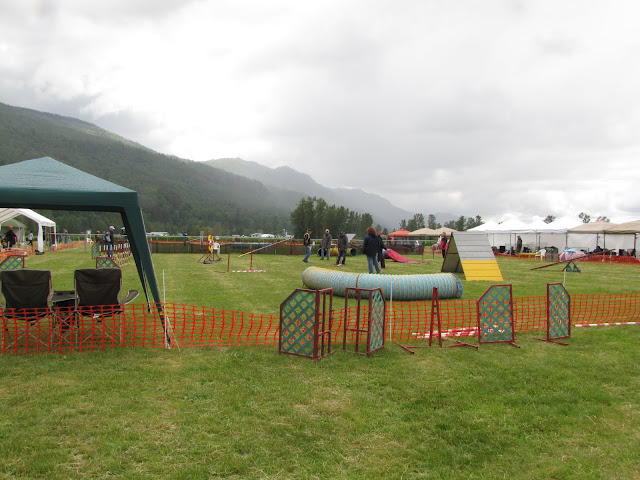 The site looked much nicer when the weather brightened up.  Before I adopted him, apparently Jake was found on that mountain. 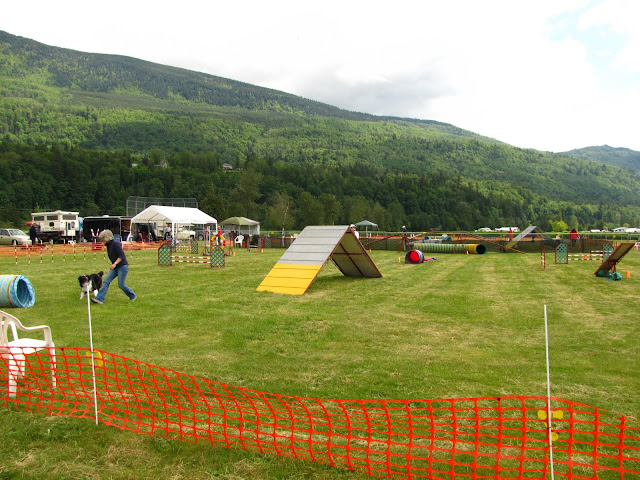 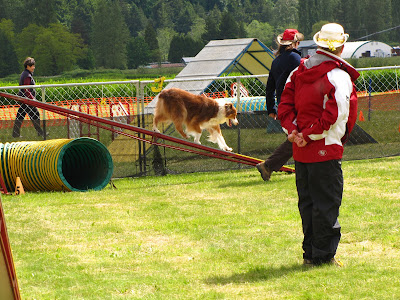 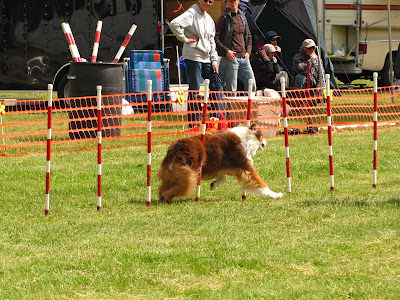 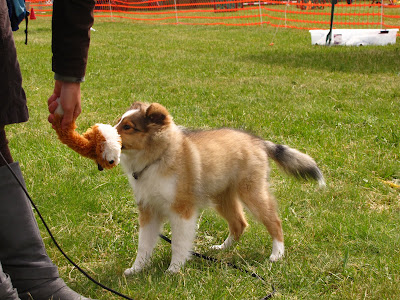 Poor Larry.  We were throwing toys for the dogs on a long grass stretch behind the parked cars.   The wind was gusting across the field and one gust in particular sent a Flying Squirrel over the edge and into a really deep drainage ditch.  There was long grass and blackberry vines along the edge, and I thrashed around in there until I spotted the FS in the black sludge below.  There was no way to reach it, despite a long pole with a hooked end, so Larry took a long walk around to a roadway going over the ditch, over two fences and along the edge of two fields, to fish the FS out from the other side, which was lower and not as overgrown.  As he is on his way back his lovely wife keeps playing with the dogs, and the next gust took the remaining FS over the edge and out of sight again.  More thrashing around by me until I spotted it on the other side of the ditch this time, so Larry did the long walk, fence climb a second time.  I'm glad I couldn't hear what he was probably muttering under his breath.  On a positive note he found a good dog ball that had been there who knows how long.  I think a lot of our dog toys are one's that other people have lost or given up looking for.    We don't give up easily. 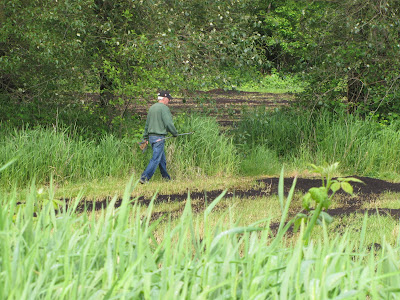