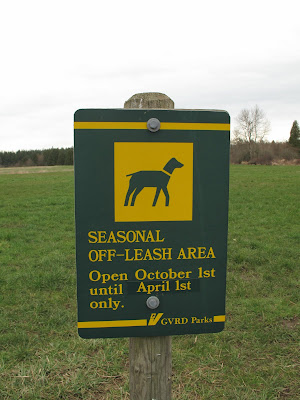 We had been in White Rock to do some gardening, and had taken the dogs with us.  They were somewhat put out that they had been confined to a small back yard while we worked.  After all, isn't getting in the truck supposed to mean that we are going somewhere exciting??   Sooo, on the way home we stopped at Campbell Valley Park for a run. Just down the road from the regular off leash park is this one. It is three large hay fields that are open in the 'non haying' season.

It was the land of the giant marshmallows.    Turns out that rubber boots were the footwear of choice.  The field was very wet.  I kept trying to head to higher ground, but when I got there, it seemed like the higher ground was still 'just over there'. 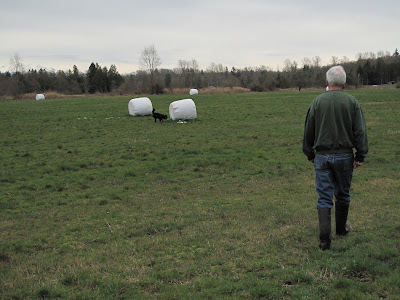 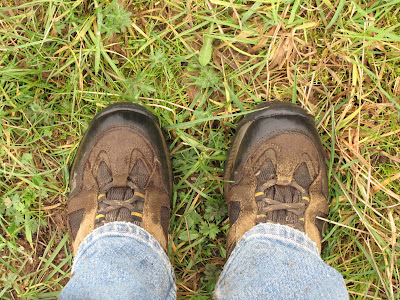 Luna slipped under the fence at one point and headed down past the horse trail.  She found something 'delectable' to roll in.  Ewww gross.  She reeked.  It wasn't horse manure, we have enough of that at home, and it smells nothing like what she did now.  It was almost like she found it too much too, as she rolled, and rolled some more, and continued rolling along the way. 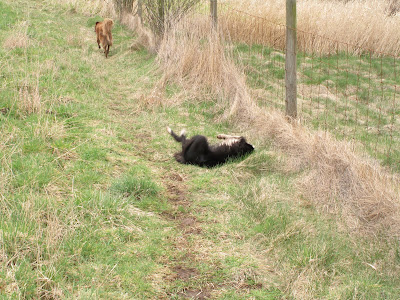 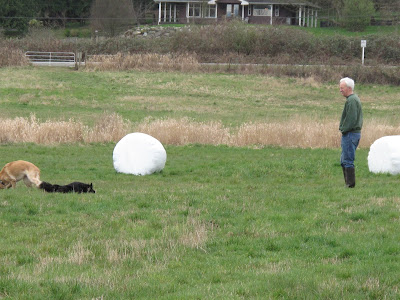 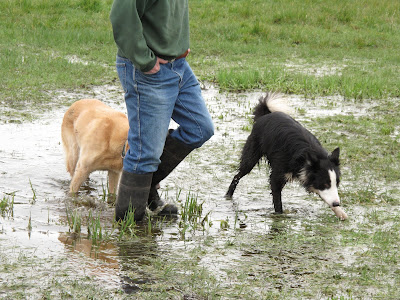 We found a puddle and hoped she would flop down in it like she often does when she is hot, but she was having nothing to do with it this time. 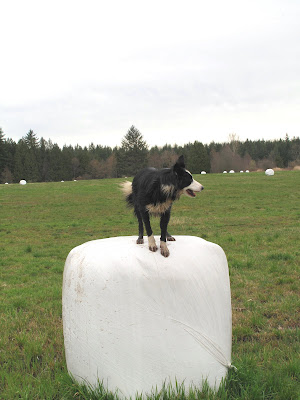 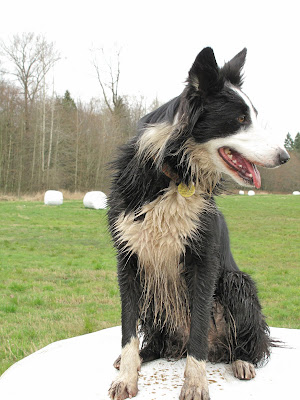 
There was a red fox out hunting, and Blondie was snacking on some fresh young grass. 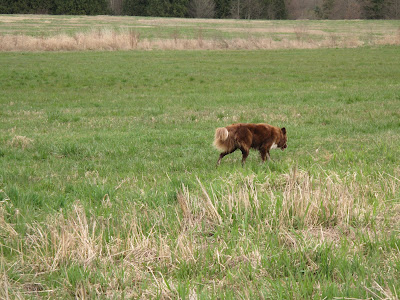 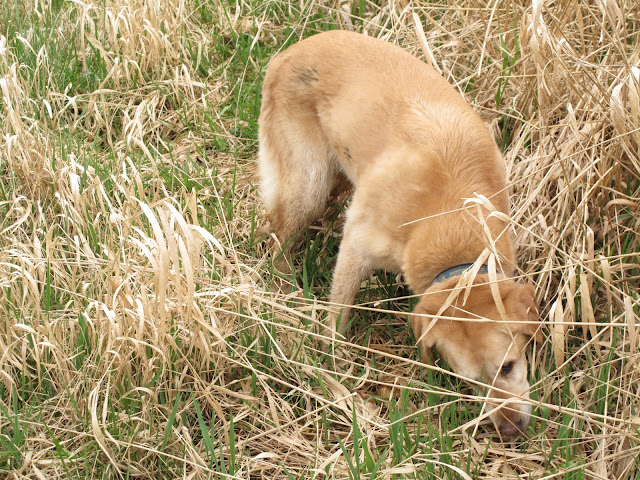 I encouraged our favourite crab apple tree (posing in front of Mt. Baker) to have a productive season.  It's the source of our 'world famous' Campbell Valley Crab Apple Jelly !!!!
Up near the road there are more old fruit trees, probably the site of an old homestead. They have still have lots of fruit on them in the late summer. 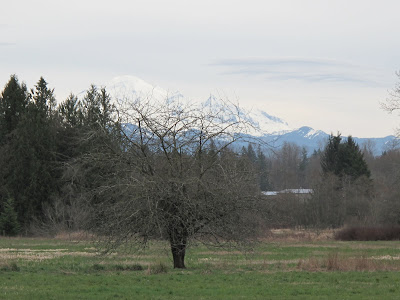 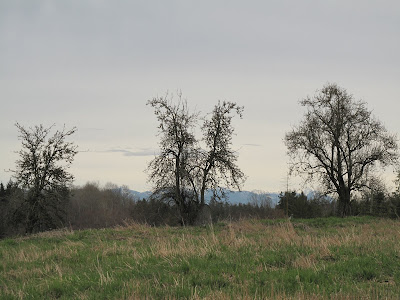 Near the road was a grove of douglas fir, and underneath them, the ground looked like it had been cleared, but this stuff was coming up all over the place.  I think it was giant hogweed.  This is an invasive species  http://www.agf.gov.bc.ca/cropprot/weedguid/ghogweed.htm 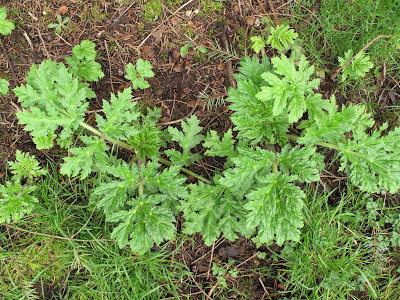 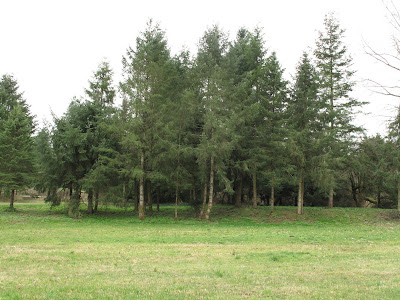 We drove home with the truck windows down, as 'eau de Luna' was still filling the air.  Unfortunately the back of the truck was filled with a large orchard ladder, and the canopy door had to be half open, otherwise she would have been riding back there.
We don't bath our dogs often, and this was going to be Luna's first time since we got her over a year ago.
We've all seen those cartoons of people trying to get their dogs into the bathroom for a bath, and the dog has all four feet braced on either side of the doorway in.  Well that was just about how it was.  No dog I have ever bathed has liked it, but they are usually resigned to the fact once they are in the tub.  Not Luna.  At one point I thought she was considered trying to make her escape through the small CLOSED window above the  tub.  Eventually she relaxed enough that I could ease the death grip on her collar, although she whined loud enough to bring Larry from upstairs to see what was happening.  Should have had him there taking pictures when she didn't look so docile. 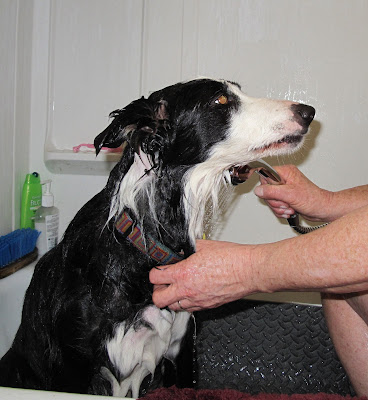 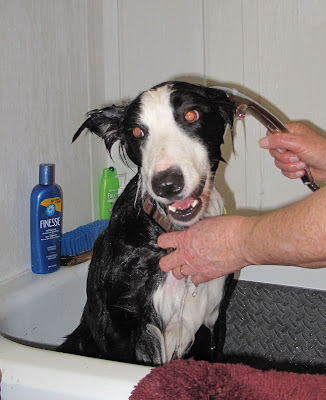 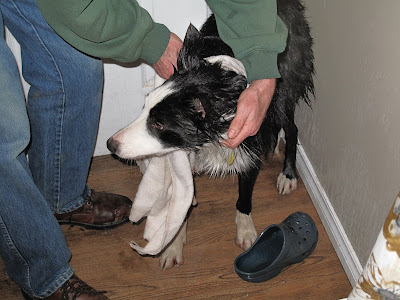 We were all relieved when it was finally over.
The sweet (none) smell of success!!
Posted by Karen at 8:27 AM