22 years ago today, this little nugget was born. Well little he wasn't, weighing 8 ounces less than a 10 lb bag of spuds. He was born in the evening, and earlier in the afternoon, while I was planting potatoes, I went into labour. 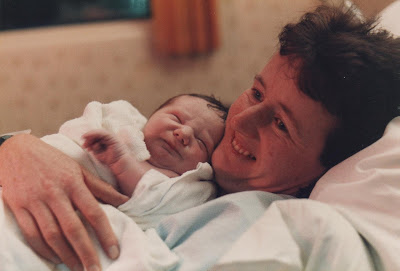 Ever since then, my goal has always been to have potatoes planted by March 3. Most years it doesn't happen. The weather doesn't cooperate, the seed potatoes aren't available yet in the stores, it just wasn't convenient, whatever.
This year everything fell into place.  Stopped by Otter Coop on the way home from White Rock, and they had potatoes!
We already had the ground ready. We had wheeled barrows of rotted horse manure and shavings onto the garden, rototilled it in, and it was just waiting for those potatoes. 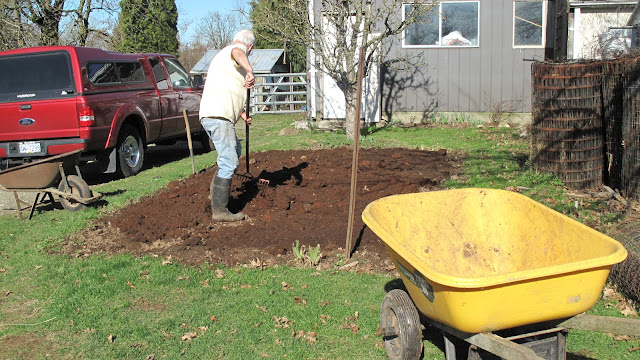 I usually plant Warba potatoes, they are one of the earliest varieties.  If the weather cooperates, they should be ready sometime in May.
http://www.inspection.gc.ca/english/plaveg/potpom/var/warba/warbae.shtml 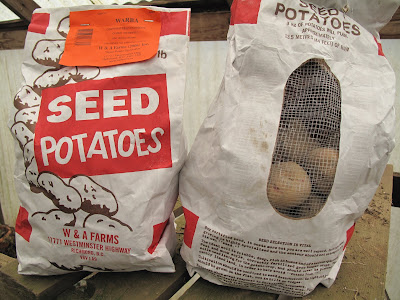 The potatoes are cut, leaving at least two, and preferably three eyes on each piece.  The eyes are where the shoots on the potatoes sprout from.   I have read various things about the fresh cuts on the potatoes, ranging from planting them right away while the cut is fresh, so allowing them to dry and the cut to heal somewhat.  I just do whatever works best for me that particular time. 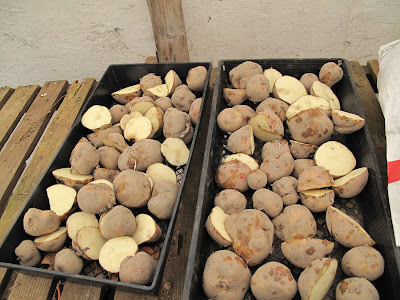 Most of the eyes are clustered at the opposite side from where the potato was attached to the parent plant.  There are a few other eyes around the middle. 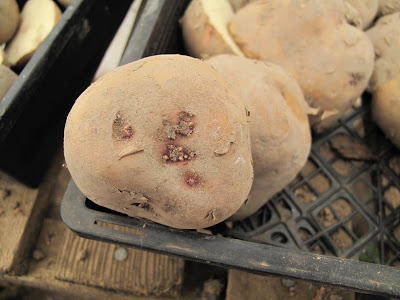 I used to make the holes with a 'dibbler', which was usually a broken spade handle, pointed at one end.  It was pushed into the ground and then rotated around, with made a kind of cone shaped hole.  Quite often though the potatoes were bigger than the hole, so didn't go all the way to the bottom.  Now I have started using a bulb planter.  It is a tubular metal tool that is slightly wider at the top than the bottom.  When it is pushed into the soil, and then lifted out, the plug of soil comes with it.   The handles are squeezed together, the metal tube opens slightly, and the soil plug can be banged out. 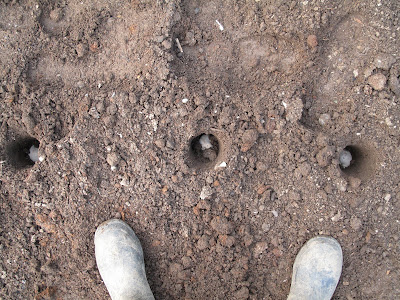 I made the holes, and Larry put the potatoes in.  Back acheing no matter which job you did. 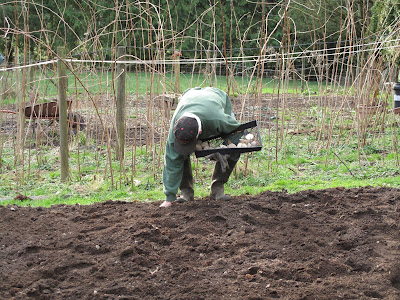 A few chickens that know how to get into the garden were industriously scratching. 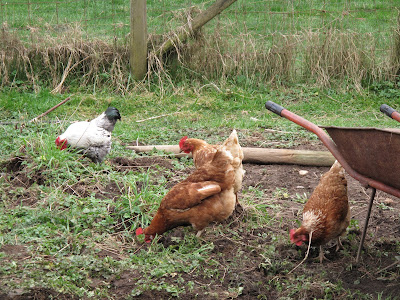 Larry was supervised while he raked the soil into hills. 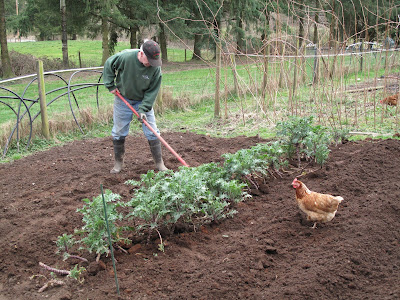 No doubt those hills will need reraking many times once the chickens get scratching there.  Honestly, sometimes they are just a pain in the butt:( 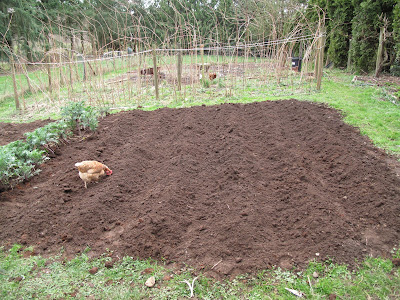 The potatoes actually got planted a day early, on March 2
And today......
Happy Birthday to my big sack o' spuds!!
Posted by Karen at 10:27 PM