This afternoon we decided to clean up what was left of the burn pile that was in the vegetable garden, and also gather up the rest of the branches and move them to another spot to burn.  We have a row of douglas fir on the south side of the south chicken field.  We had been trimming the lower branches off to open it up and get the grass growing under the trees again, as well as returning our view over the neighbour's nice field to the south. 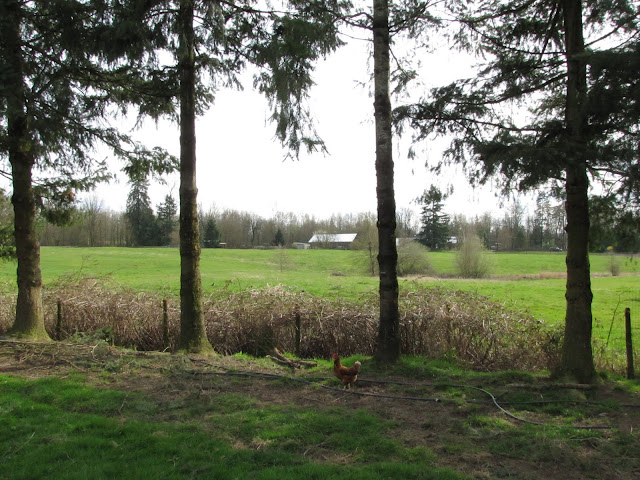 As soon as we brought the truck into the field and started loading it up, there were a few hens that just had to check it out. 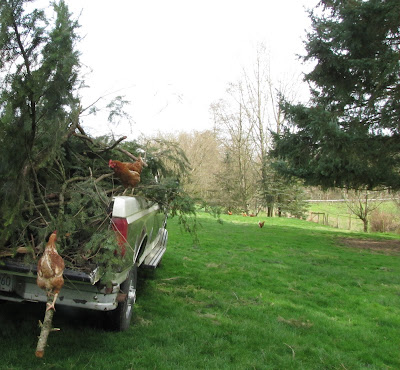 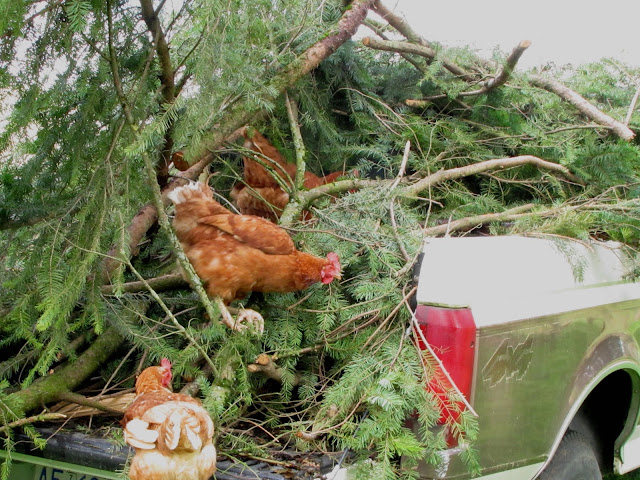 They headed deeper and deeper into the pile, until we couldn't see them at all.  Eventually we did get them all out but one.  I knew where she was, and there was lots of room under the curved branches, so I wasn't worried about her getting crushed as we piled the rest of the branches on. 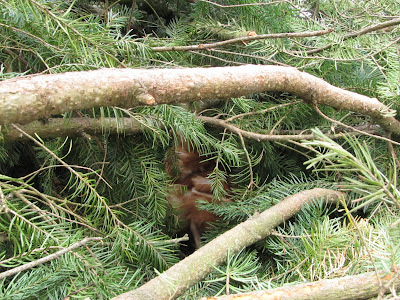 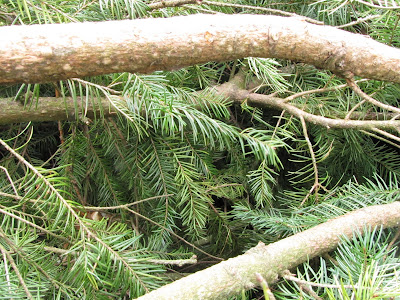 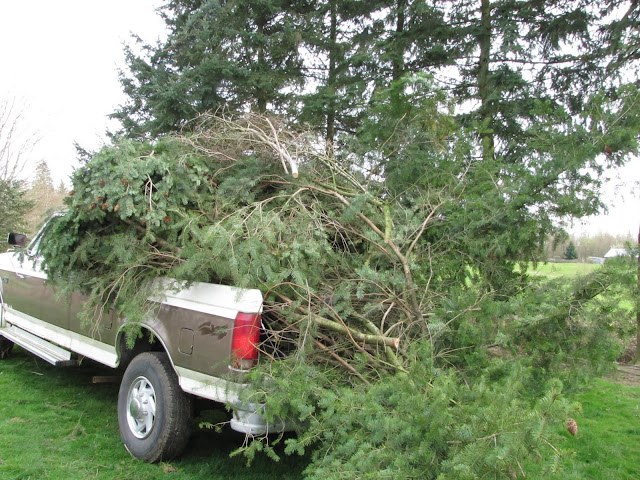 The branches were all loaded up, and we headed up to the burn pile, where we unloaded enough that I was able to get the hen out and return her to her field.
After that, the dogs figured it must be time for their afternoon walk.  We decided to head back to the river and check out Duncan Bar, the eastern chunk of Glen Valley Regional Park.  It consisted of a long triangular piece of land between the river and the railway track, and at the eastern end it dwindled to nothing.  It seemed like it must have been an old farmstead at one time.  There was no big sandbar like there was at Poplar Bar, but there was enough sand along the edge to make it enjoyable.  There was an old gravel road to start and then a grassy track to follow.  We came across a few old fruit trees, like this plum tree,  and there was also a patch of raspberries.  I want to go back and check it out when the fruit is in season.  You never know, there might be a new flavour of plum jam coming up! 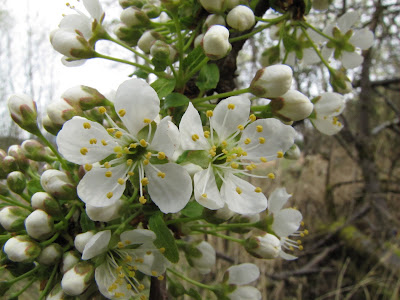 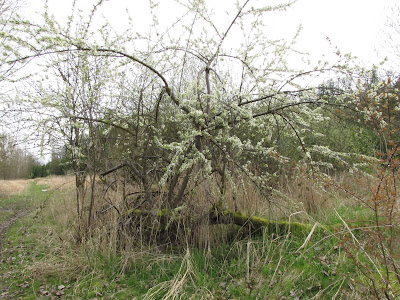 Across the river there were some rusting boats moored, including an old B.C. ferry 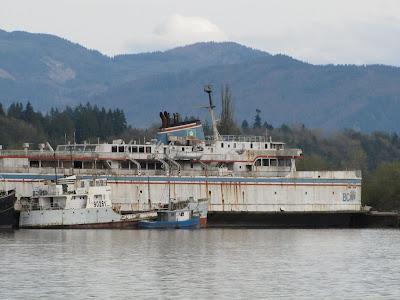 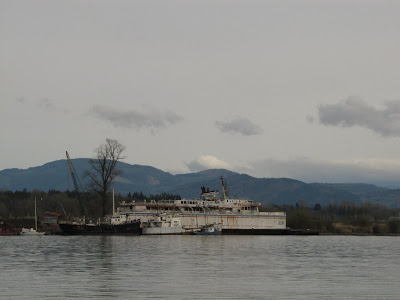 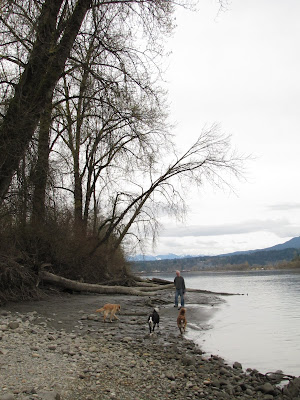 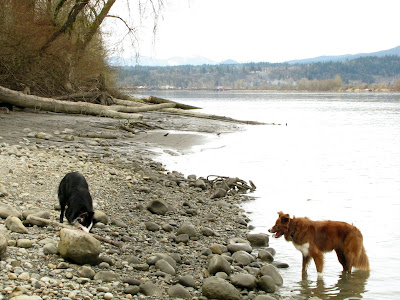 Luna managed to find a stick, although it was a bit on the large size 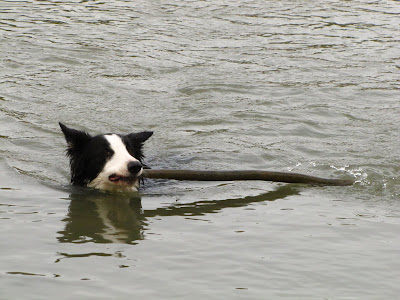 Luna swam with it, but Jake went for something that was a bit easier to handle.  For some reason the border collies do not seem to have the sense to pick up a big stick in the middle, instead of at one end.  Our lab Echo used to carry around small logs, perfectly balanced across her mouth. 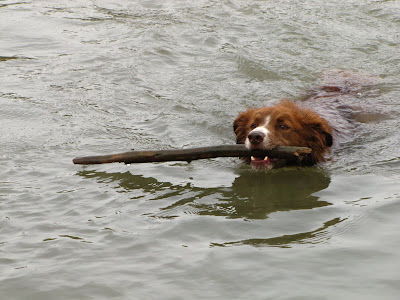 Calli found the biggest rock she could get in her mouth, and continued to try and find China.  Not much success with that, so she took Mr. Rock for a swim 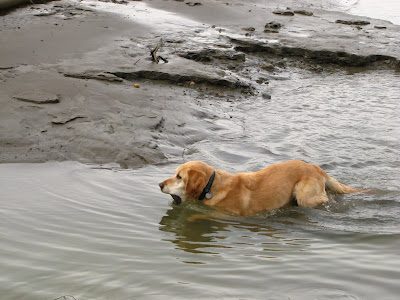 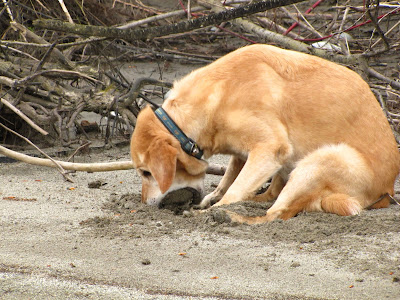 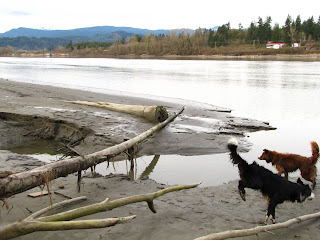 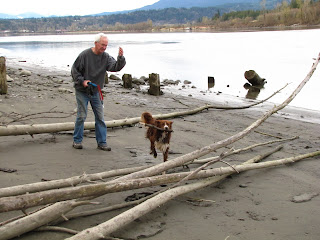 We tried to practice some agility over the logs, but the fool with the camera in her face had no sense of timing. 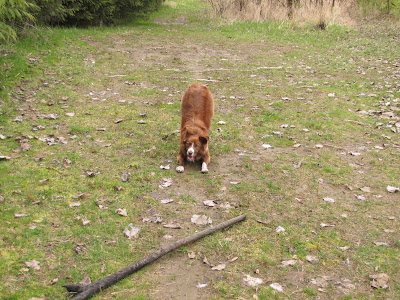 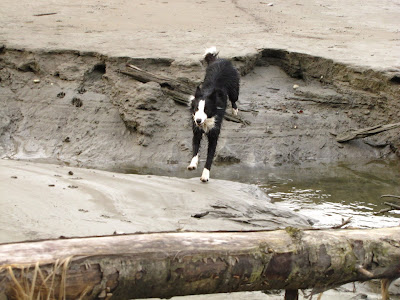 Luna found something else to jump over, and camera lady got it right that time.  Jake wanted me to take the big stick home for him.
When we got home, Calli had dirty marks on her side, so we got her to sit in the pool.  When she shakes she is not very effective, and don't think she had even tried  at this point.  Her tail is like a big paint brush, dripping water in loopy circles.  Maybe next time we could sit her in paint and get her to walk around on a big canvas.  Then we could sell it for big bucks! Yeah, I'm dreaming.  Maybe it would buy a box of chicken legs, heck if she could pay for a few doggy meals, that would be better than nothing. 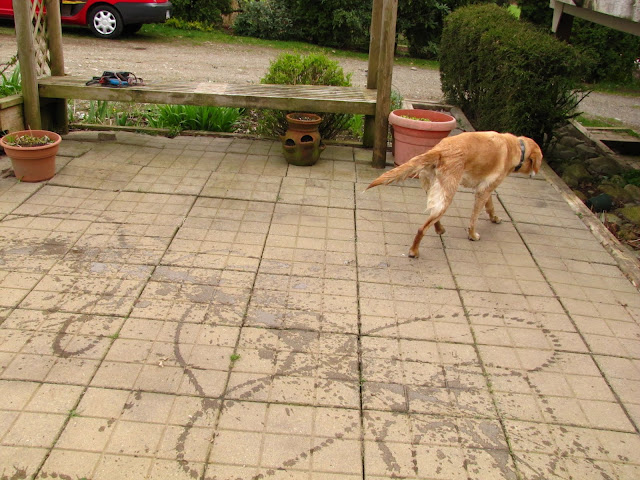