We disappeared up to Oliver for a week. Needed a break sort of, and I wasn't able to do anything yet regarding most of my mum's affairs. Larry decided that it was a good time to come down with the flu.  Maybe it was sort of a mild case, he didn't do much but sleep for a couple of days, and then on the third day he was able to get himself to the dog park with Jake and Calli while I did a run with Luna.  Recovery has been slow, but he's getting there.  Thankfully it didn't happen later, because while at Oliver we got a call to say that there was a cancellation, and would he be available for eye surgery on Feb. 11.  That is to do an epithelial cell transplant in his second eye because of his Fuch's Dystrophy. Yippee!  We are close to two years now, first with the cataract surgery, waiting for each of those, then the disappointment of those not improving his vision because the Fuch's Dystrophy had been aggravated.  Then waiting for the surgery to do the cell replacement, the first one was postponed due to lack of donor tissue, finally it was done at the end of June last year. Hopefully this one will happen on the 11th, but we won't know for sure until the day before.  Then there will be the recovery from that, and then finally he will be able to get a new prescription for his glasses.
Anyway, on Jan 26th, Calli turned 16, which is a mighty fine age for a dog, especially a lab/golden retriever cross, and especially so considering what she has dealt with. 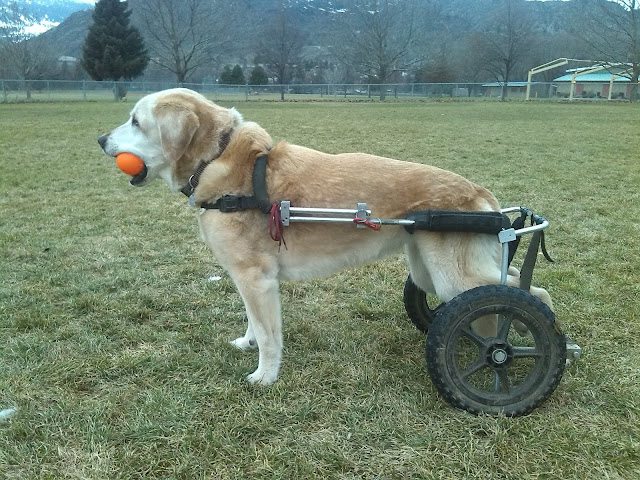 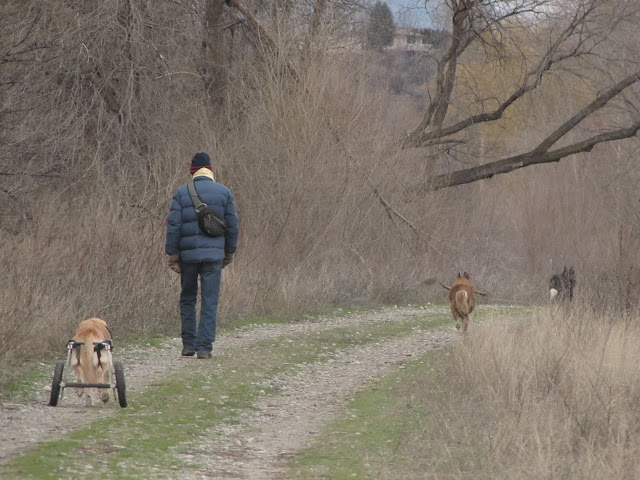 At this point now, her back legs have no strength at all. She used to be able to pull herself up and get around well, but not at all now.  Of course as a senior dog, she spends a lot of time sleeping.  We have to hold her up while she eats, and what comes out the other end is manipulated by us. We used to be able to tell her to 'go pee, go pee' and something eventually would click and she would. Now she can't hear us anyway, and she can't walk around.
Her favourite spot to sleep is in the basement, she had a big mat there.  In the last year that she has lost all strength in her back legs, she can't move around on her mat much.  But, her front legs are super strong, so she will push herself up with those, and then the back end just slides away, and eventually she ends up off her mat.
Last summer in garage sale season, I went to one held by someone that use to sell dog supplies.  I got this cool dog playpen.  It was funny, there was another lady hanging around waiting to see if I would walk away from it.  She was informed by the owner that it was for dogs, not kids, and the woman laughed and said she was sure her daughter-in-law wouldn't want to get a dog pen for her kids.  Anyway, it was brand new, I paid $10, and it folds up like a baby playpen.  I figured I could fit two dogs in it, and if I made a top for it, maybe I could use it at agility trials or something (if I ever enter one again).
Since Calli often would start barking if she ended up off her mat, and she has a loud bark, and having to head down the to basement to sort her out at 2am wasn't really appreciated, I tried her with the dog playpen, and it really is perfect.  If she starts pushing herself around with her front legs, she can't really go anywhere, we just have to remember to zip the door shut. 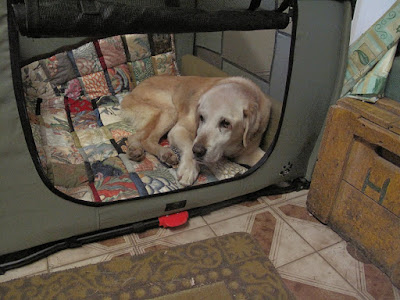 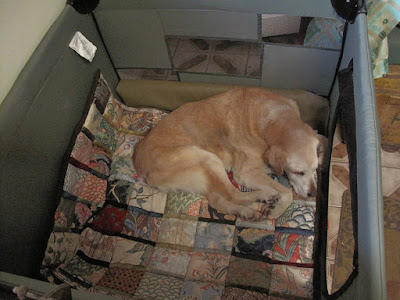 We didn't take it to Oliver, because really there isn't enough room there.  This is were she sleeps there, in a nook created by the end of the loveseat and a kitchen island.  The first night I was woken by some thumping, not barking.  I figured it had to be Calli so I got up and and she was off her mat and across the room by that little three legged table you can see at the end of the other loveseat.  The thumping was her pushing herself up with the front legs, and then her body sliding backwards and the elbows thumping back down on the floor. 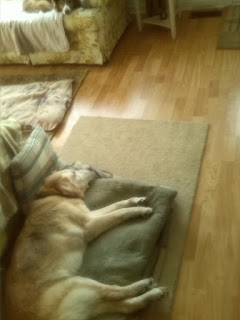 We did have a dog crate with us, but it wasn't big enough for her to lay full out like she is here.  So the next night I got creative and made a pen out of furniture.  It worked.  No barking.  Luna decided it was her turn, and she whined to go out, so I had to get up anyway. 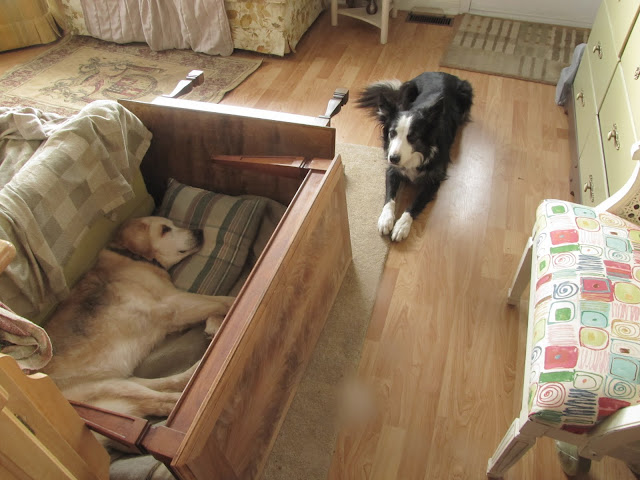 The third night Calli barked again, even though she was still on her mat. Who knows why, she is doing that more often now.  Up again, I got the dog brush and brushed her for a couple of minutes, that seemed to work.
The fourth night, the same thing, and yay! Larry felt good enough to get up that time.  The last three nights were quiet ones, thank goodness.

This is the second day there, Larry was still out for the count, and I was walking the dogs down the dyke. It is a relaxed walk, as Calli doesn't go that fast, and the other two get lots of time for sniffing and doing dog stuff.
I was hoping to see some decent snow while we were at Oliver, but this is as much as we got. 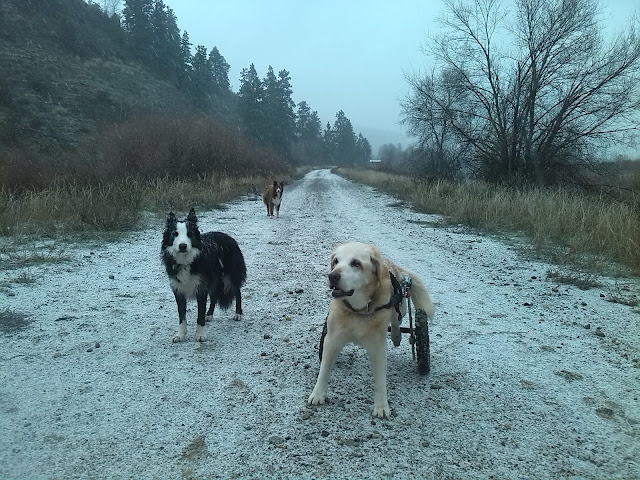