A Nod to Nostalgia

On Monday I got to the thrift store at opening time, I was a woman on a mission.  I was successful with my mission (more on that in another post), and after I had taken that prize out to the car, I came back into the store and had a good long poke around.  Items with green tags were 50 cents starting that morning, and blue tags were 50% off.  I was looking around in the 'collectable' section.  They had a few different food mills there, the most expensive being about $10.  I saw this one, it was priced at $2.50, was a blue tag so was half price, but it said it was missing the nut. 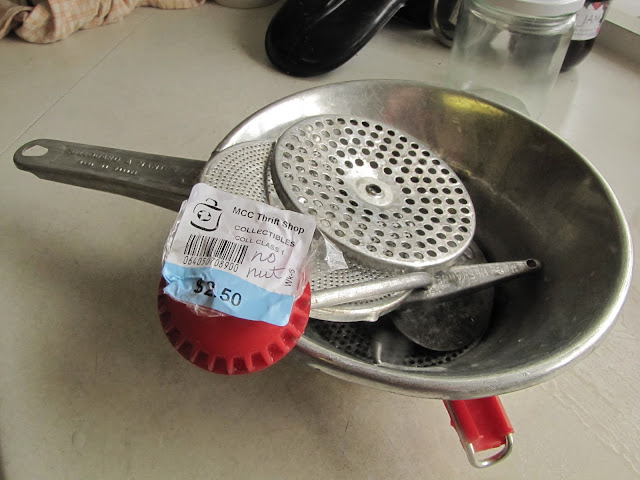 The expensive food mill had a nut on the bottom that held the shaft in place.  But, I was really familiar with the style of this one, and I knew it didn't need a nut.  I knew how it went together.
Voila! 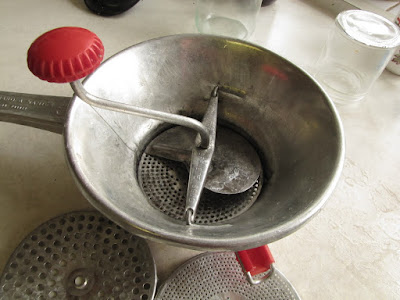 When I was a kid, my mum had one of these.  I 'think' it was called a Mouli Baby, but it was very, very similar.
At some points in my childhood we had the same meals on the same days of the week.  For example...Sunday was roast beef and Yorkshire pudding, and if my dad was lucky, custard pies with nutmeg sprinkled on top. I can remember my mum running the nutmeg 'nut'? over the grater. Mondays were cold roast beef with mashed potatoes, maybe cooked cabbage and carrots, and baked beans from a can.  Mmm, the beans and the mashed potatoes in one forkful together....mmmm. Tuesdays were home made fish and chips, Wednesdays were roast chicken with home made buns.  I remember ripping them open while still warm and sopping up some of the drippings from the bottom of the roasting pan. Thursdays escapes me, maybe leftovers from Wednesdays?  At one point Friday was some sort of stew, and then at another time was liver and onions and fried tomatoes too I think.  Saturday was a barbequed chicken from Safeway.

Anyway, back to the food mill.  My memory is of me not wanting to eat the stew on Friday.  So unwisely, my mother decided that it would be easier for me (I would like it better?) if she ran it through the food mill so that it was all mushed together and not in big chunks.  Because she had added split green peas to the stew, what she ended up with was a green mush, which I wouldn't eat either.

Now I can look at the food mill with fondness, and wonder what happened to my mum's.  I don't remember coming across it four years ago when we cleaned out her house and had a garage sale. 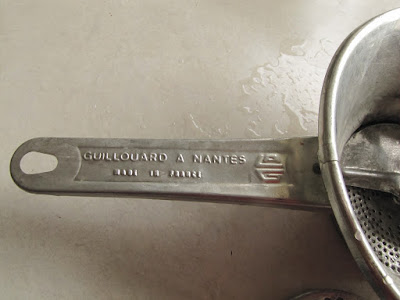 So less than the price of a cup of coffee I brought this one home.  Not an antique, with that red plastic on it.  But a little bit of nostalgia for me.  I may never use it.  It may go back to the thrift store sooner rather than later, we'll see.  For the moment it gives me a little jolt of pleasure when I look at it. 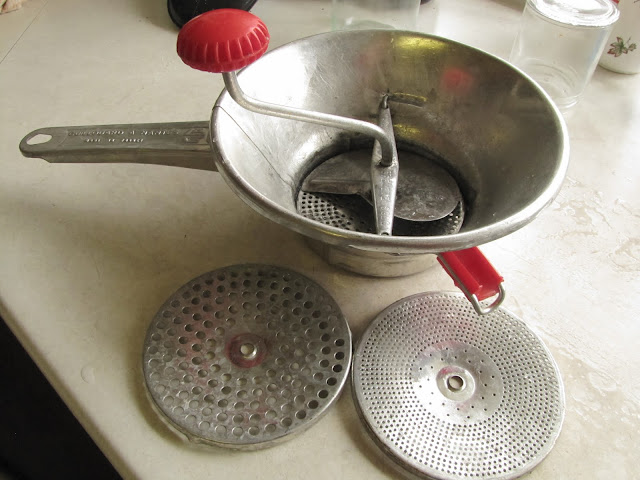 It gives me a jolt of pleasure too when I see this Guillouard Food Mill  listed at Lee Valley Tools for $98;-)  Virtually unchanged since 1939 it says.  Except the price of course, I think I might have paid the 1939 price!

PS.
We went back to the Opthalmologist today in Vancouver.  Much nicer drive, no rain.  Much better news too, the doctor says the eye looks good, about 80% of the new cells are starting to do their job. Phew, that is a relief, I think we were both feeling a bit stressed about the transplant possibly being a failure.
We searched for a free parking spot.  The only one we found was on an incredibly steep hill.  So steep that the sidewalk there, down one side, had raised concrete 'slats' so that you wouldn't slip.  Our car is a standard.  I had to use the parking brake method to stop the car from rolling back, but it didn't really want to hold us. I was freaking out really worried that I was going to roll into the car below us as I tried to jiggle around to tuck the car in nicely.  I made Larry get out and tell me how close I was to the car behind.  Anyway we all survived unscathed, and conveniently when we came to leave, the car in front was just leaving too.
Nearly three weeks before we have to go back for the next check up.  Hopefully Larry will get the okay to drive at that point.