Guardian of the Garlic

Here's some more pictures from that Spring day we had on Tuesday.  I was puttering around in the garden, not accomplishing a whole lot.  Just a bit of random clean up and this and that.  Remember that lumberjack window we made last year by cutting two of the fir trees down on the south property line?  Well it's great, it allows a patch of sunlight to slowly sweep across the garden, until such time that the sun is high enough to shine over the tops of the trees. Luna came in and plonked herself down to soak up some sun too.  That's the garlic right in front of her. 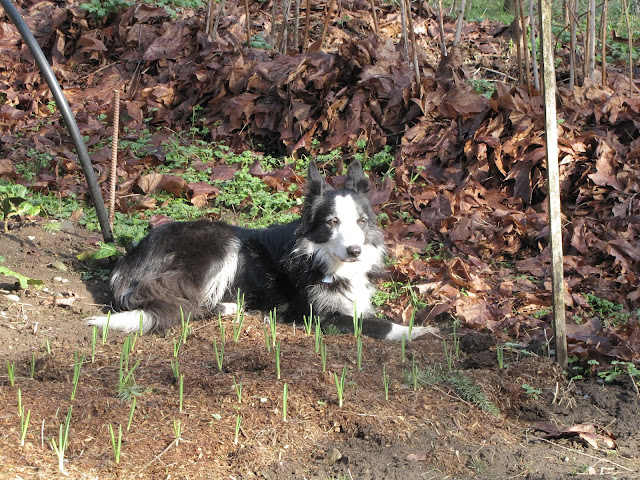 It got planted rather late, I think about the end of November, but I'm happy to see that pretty well every clove has sent up a shoot.  I should have kept more to plant, instead of selling so much.  Oh well. 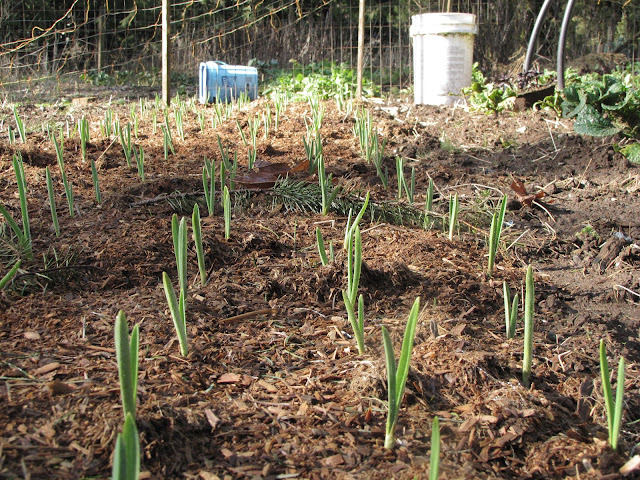 There are quite a few rather pathetic leeks left too.  Skinny little things, because they got overrun with weeds last summer and were struggling to survive.  I use them when I make stock or bone broth. I cut them in half lengthways so that I can wash the dirt out from between the layers, and throw the whole thing in the stock pot.  I use them in soups too. 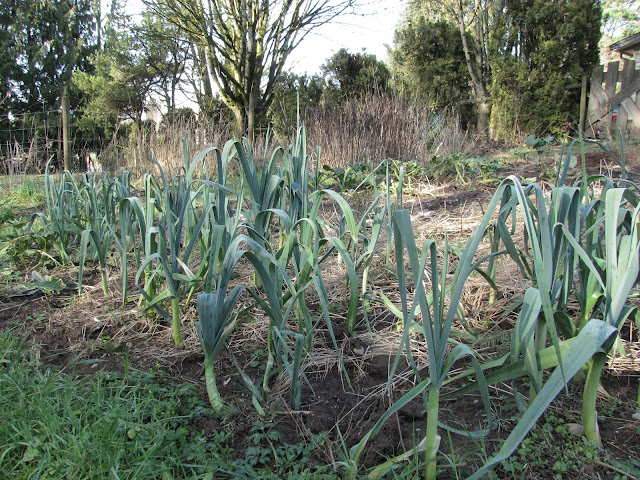 And here's the last of the red cabbages.  Not very big, about the size of a large apple.  Little skinny worms like to spend the winter between the outer layers, so you have to pull quite a few layers off, and even now I'd be checking or pulling off a few more layers before I used the cabbage. 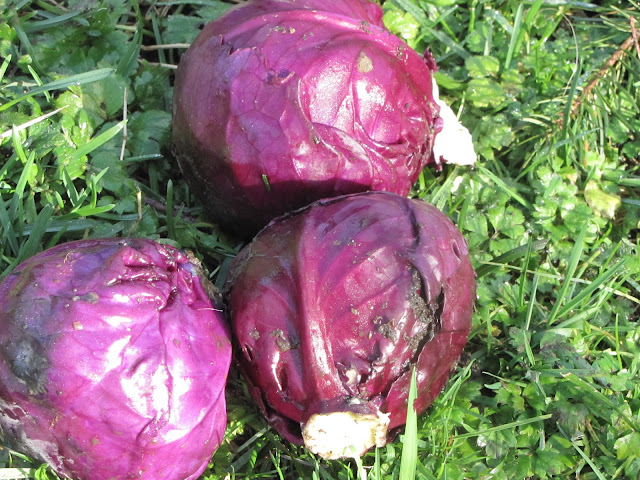 The hens enjoyed the pieces I pulled off. 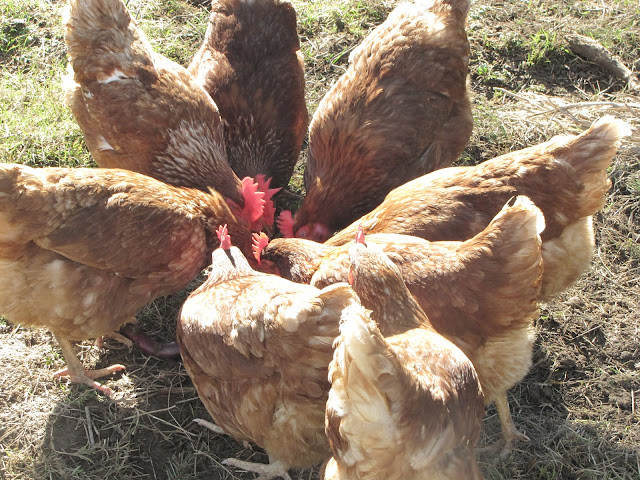 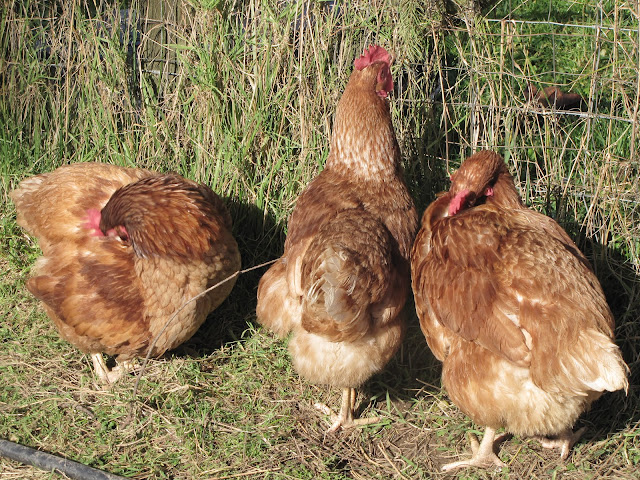 Or laid down to sunbathe. 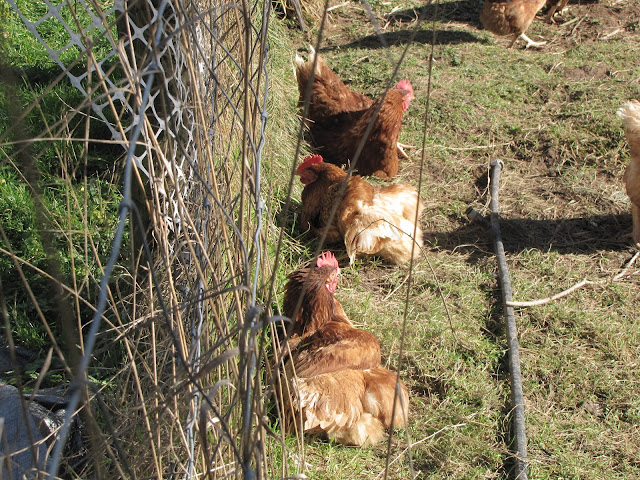 I did some cleaning up in the greenhouse too.  Pulled all the old tomato plants out, and some weeds that were coming up already.  I need to get the benches back in there and get some seeds started. 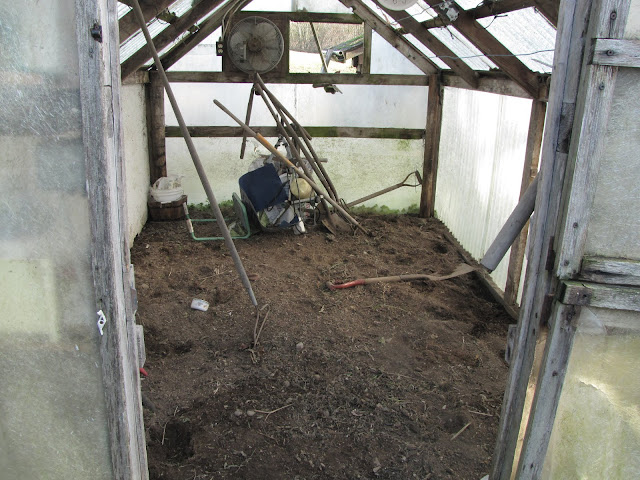 I saw daffodils blooming in Vancouver today!
It was a long day in there.  After taking the dogs for a walk in the dark, we left here at 6:30 am.  Larry was supposed to check in at 8am, and we were there with a bit of time to spare.  I left about 8:30 after he went to be prepped for surgery.  I found a McDonalds not too far away that had a parking lot, so I didn't have to try find street parking, and sat in there about an hour drinking coffee and reading the newspaper.  Then I drove to a thrift store and spent an hour in there, slowly looking at everything, trying to kill time.  Larry said after that he thought that he was the last one to go for surgery.  They do a lot of eye surgeries at this hospital.  After the surgery he had to lay on his back for an hour.  I was phoned at 11:25 when he came out of surgery, and was to pick him up in an hour.  Then we had to go straight to the doctors office so he could check that everything was staying in place.  He had to 'decompress' the eye.  The air bubble that holds the layer of cells in place was too big.  So some drops went in, back into the waiting room for a while and then back into the exam room to reduce the size of the bubble.   We were there more than an hour, because I had to pay $10 for two hours of parking.  Usually when we go to his office we are able to find free parking a bit farther afield, and have a bit of a walk.  Since Larry isn't really supposed to be walking around, and it was raining, the only option was the parking under the building.  Anyway, we finally got out of there just after 2pm.  Slow going driving through Vancouver with all the traffic lights, but once we got on the freeway and were able to use the HOV lane because there were two of us in the car, it went pretty well.  We got home just after 3.  I thought Jake and Luna would be having to cross their legs, they aren't left that long without a break outside,  very often.  That darn Luna and her iron bladder, she didn't even want to go out and pee when we finally got home.
Larry has to lay around tomorrow, and then back to Vancouver for checkups on Monday and Friday.

PS  I started playing around with the blog design.  Let me know if you don't like the font ( I think it might be a bit harder to read).  Sometimes you just want to change things up a bit....
PPS I changed it again.  This is more of a happy median between the original font and the first one I changed it too. I decided that that first change really WAS harder to read.