From Spring back to Winter

On Friday it was Spring.  We did a bit of pruning of the fruit trees, trying to stop before we overworked our crappy shoulders.  I was down to a t-shirt (I always get warmer than Larry when we are working).  I washed all those loads of laundry.  No, our washing machine is nothing special.  An ordinary top loader I bought second hand off Craigslist. 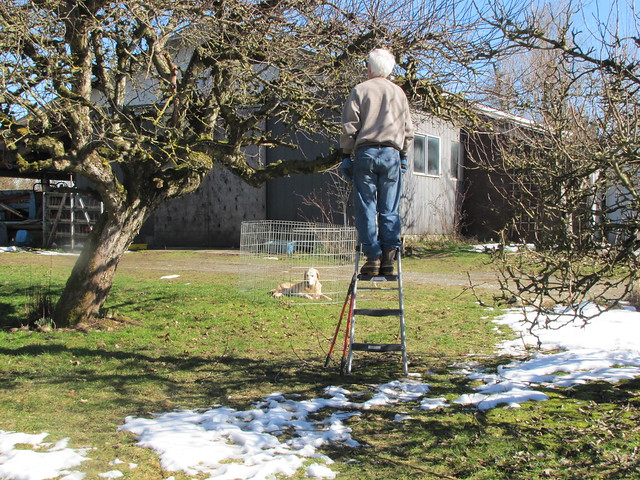 The dogs were chewing on some bones, well Luna and Jake at least.  I gave Calli the best bone.  She didn't care.  We had come back from our walk and she just wanted to go back into her dark hole in the basement.  I didn't want her to.  I wanted her to lay outside in the warm of the sun and chew on her bone.  She didn't want to.  She kept going to the basement door and barking to go in.  We were all outside, and I wanted her to stay out and get some vitamin D.  I have no idea if dogs absorb vitamin D like we do, but I wanted her out there anyway.  Larry suggested we put her in the x-pen.  Great idea!  She never really did chew on the bone, but she did relax and didn't bark about her situation.  After a while Luna realized that Calli had the best bone.  She circled the x-pen and nudged it with her nose a few times, but wouldn't really dare do any more than that  while we were there. 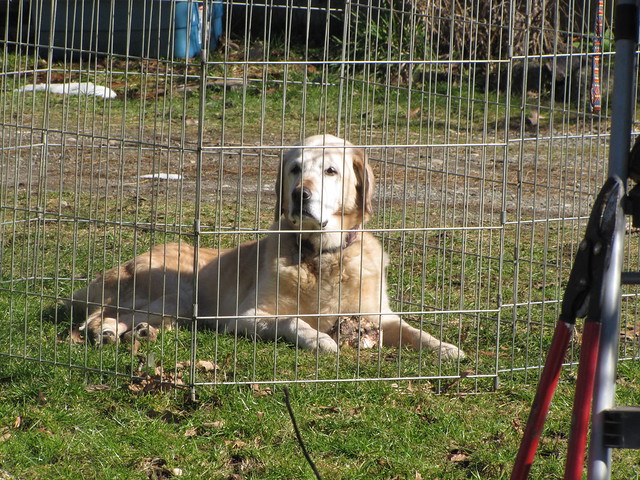 Lunchtime rolled around.  We are always happy to have the excuse to stop for lunch.  The dogs were still outside.  I glanced out of the window and saw this. 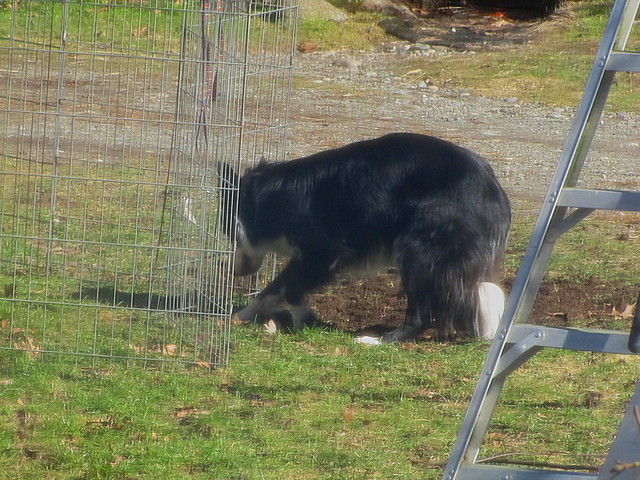 Luna had pushed the side of the x-pen in.  She was digging at the outside.  It's hard to see, but the bone is just on the other side of the wire in her shadow.  Then she laid down to see if her pointy nose would fit under.  Not yet. 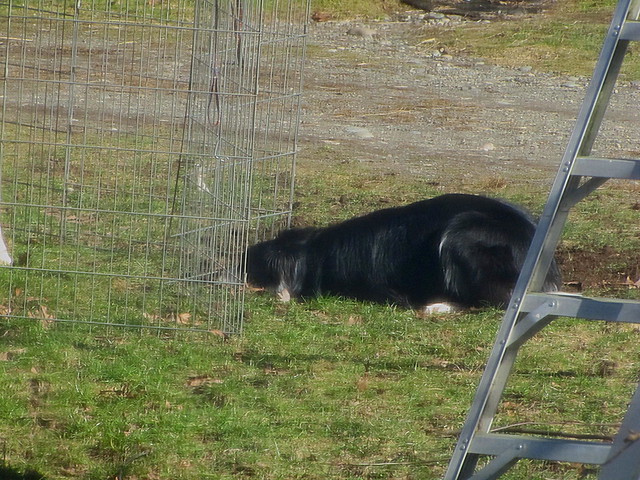 I managed to sneak out of the back door without her noticing. .

Did I mention what a glorious day it was?:)  It truly was, the birds were chirping, it was warm, we thought Spring had arrived.  Nope.

The next day, March 1st, came in like a lion.  It was cold, it was windy, my dog club was holding an agility trial in an unheated barn.  A little bit of snow was blowing in the wind.  Snow would flutter down through the venting strip at the ridge of the barn roof.  People were huddled under a patio heater.  The ring crew were huddled in their blankets.  Sunday morning was the worst.  The snow had started in earnest.  The roads were not the best.  People told of seeing cars in the ditch on the drive there.  There was a white strip of snow all the way down the middle of the ring that had blown thrown the vent strip on the roof overnight. Us dog people are a hardy bunch though, and eventually almost all the entries straggled in.  We started the trial late to allow some leeway on travelling times, and then we seemed to get farther behind as the day went on.  I had spent the first hour and a half as the parking attendant, as the parking area is small and we were trying to cram in as many cars as we could.  I figured on Sunday that a lot of people would cancel and I wouldn't really have to worry, but no, that parking lot filled up again.  It was a 12 hour day.

Oh the joys of using outdoor portapotties in the cold.  Umpteen layers seem to make you twice the size, with barely room to manoeuvre in there.  When you're done you pull the first bottom layer up, pull the first top layer down over it, pull the next bottom layer up over that, pull then next top layer down over that, and so on...., so every thing is all nicely tucked in so there are no cold drafts blowing round your back.  Three layers on the bottom, 5 layers on the top.

I was able to run my dogs at the trial.  Jake, well he was just amazing:)  Like someone said, you can bring him out of the closet, dust him off, throw him in the ring, and he just performs.  Neither dog had seen any agility equipment since early January, and hadn't had any serious work since last Fall.  Not that I take agility seriously any more, it's just something fun I do with my dogs occasionally.  We lose our practice barn to the BMXers over much of the winter.
Jake went 5 for 5.  Five Qualifying runs, with a first, three seconds, and a third place.  Love my little red dog:)  He has now earned enough Q's to get his Silver award.  Two nice rosettes for that, which I borrowed for a photo, and were handed back.   I don't display them, and no point in just stuffing them in a drawer to become more junk. 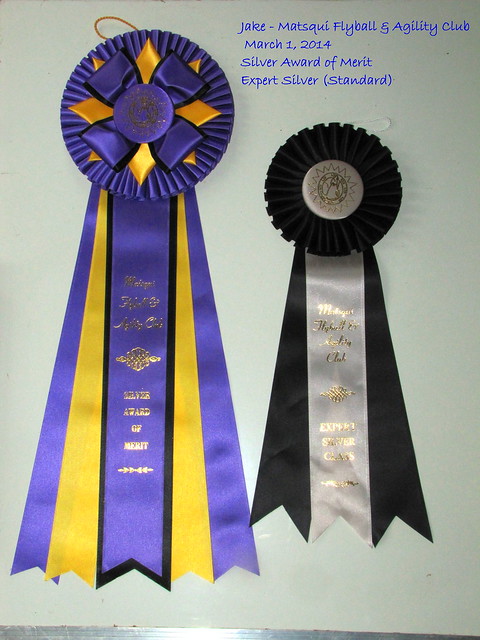 Luna, well she is a riot to run.  She is kind of crazy, okay a lot crazy on Saturday.  Let's just say we had a lot of fun.  She was the only dog I ran on Sunday, and got 2 out of 3 Qualifying runs, and just one bar down to prevent the third.  A first place in one class for sure, and I think a first in the other.  I don't take any ribbons, and don't care too much about the placements, it is really the 'Q' (as we agility people call the Qualifying runs) that counts.  It is the 'Q's accumulated that allow you to move up in divisions, or receive titles.
Luna was good, was quite social, and only had a couple of small snarks with dogs that 'stared' at her.  An awesome weekend spent with my dogs.

We got a got about 3 inches of snow on Sunday, and then we got freezing rain, just barely freezing.  Thankfully not a lot, about a 1/4 inch coating on everything.  The roads were good for driving home.  The power went off last night, just as Amazing Race was starting:(  A few branches off a large fir tree near the front of the house broke off with almighty cracks.  The power is on this morning.  Unfortunately this snow melt will not be as kind as last week's, with it's sunshine, mild temperatures and NO rain.  It is wet, slushy and raining out there this morning, with rain forecast all week.  The birds are singing though, so Spring surely must be on it's way.