Right now I am picking away at some projects that are taking much longer than I thought they would.  But then that's nothing new.  The potential for projects around here is endless.

I did manage to get a small plot of potatoes planted this morning, just as it was starting to rain.  Those hens all volunteered to help, but I said thanks very much, but I'll do it myself. 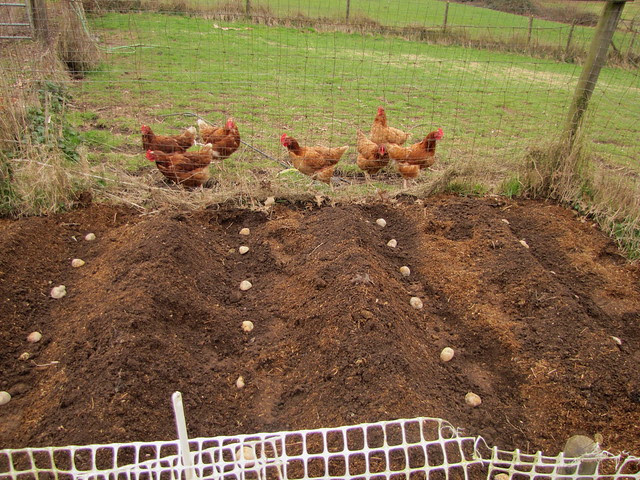 I've talked a few times about painting the tool handles orange.  We are both terrible at leaving tools where we were last using them, and not putting them away.  Mostly it is because jobs never seem to get finished in one go, so you leave the tool(s) there so that they are ready when you go back to finish it.  Then something else seems more important/more exciting to do, and the tools get forgotten.  We waste a lot of time looking for things.  At least this way they are easier to spot.  Oh sure, if we would just put them away, it would be even better, but since we can't remember to put them away, that's where the problem lies. 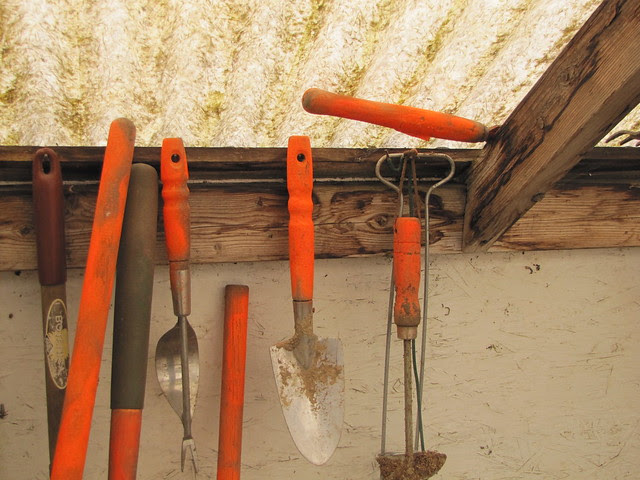 Larry saw the handles and said what a horrible colour it was.  My dear, that is just the point, maybe we'll actually see them out there.

I worked on a piece of furniture in the livingroom, and I think I can say that is finished for now.  Maybe there will be pictures tomorrow.

We are trying to get things sorted out and cleaned up.  Progress in slow.   We usually have a box or bag on the go that will be dropped off at the thrift store.  Things leave here, but then I can bring stuff in just as fast.

Some neighbours of ours, that have lived here almost as long as us, have sold and have moved to a townhouse in town.  Their son, who helped them move, asked us if we wanted to come and have a look at anything left in the garage and workshop that we might need.  There were a few things for sale, we bought a lawnmower and a drill press, and then we poked around and gathered all sorts of odds and ends.  A wheelbarrow, hoses, small weadeater, shovels, a rake, on and on.  Somethings we were undecided on, actually it was a bit overwhelming.   The son said well we had until 12 noon today, before the new owners took possession, if we wanted to come back for anything.  I went back in the afternoon as we had thought of a use for something we had turned down in the morning.  Some guys were there with a couple of bins on the backs of trucks and were doing cleanup of some of the old junk that tends to accumulate on an acreage, as well as the rest of the stuff us neighbours didn't want.  I did manage to get some of what I went back for.

We went back again in the evening and inadvertently took a wheelbarrow that belong to the bin guys.  It was upside down in the bin, we thought it was going to the dump, and figured we would 'save ' it.   I got a phone call from the son early this afternoon.  He said they were just finishing up, and the wheelbarrow belonging to the bin guys had gone missing.  They were wondering if one of the neighbours had been by and taken it.  Oops.  I apologized up and down and sideways, felt like an idiot, etc.  He said the bin guy was going to stop by for it in a few minutes.  I rushed out to the barn and took it out to him.  Apologized all over the place again, as I'm giving him a dozen eggs.  He was very nice about it, and said they have got another job there, as the new owners are going to replace the roof shortly.  We'll have to wander over one day and introduce ourselves.  Thank goodness it wasn't the new owner's wheelbarrow that I wandered off with. That really would be getting off on the wrong foot.