Big Guns to the Rescue.

This is looking down our driveway now.  When we moved here nearly 28 years ago, there were a few of those cedar hedging trees down the side of the driveway, in random places.  I strongly suggested we buy more, and we made a nice row of them on either side of the driveway, each planted ten feet apart.  There are now about 30 of them.  And then they grew, and grew some more.  We got a really bad dose of freezing rain one winter, and the trees all opened up like a flower, with the branches bent out to the ground.   We cut the bent branches off, and then put webbing around the inner trunks, and fastened them back in tight together.  The webbing is still there, doing it's job.  Every few years I'd whack the tops off the trees to keep them at a reasonable height, but we never pruned the sides.  Big mistake.  Some of the trees had grown up to eight feet wide, and the ones that are right out in the open are about fifteen or sixteen feet tall.  The ones under the trees stayed shorter and narrower. 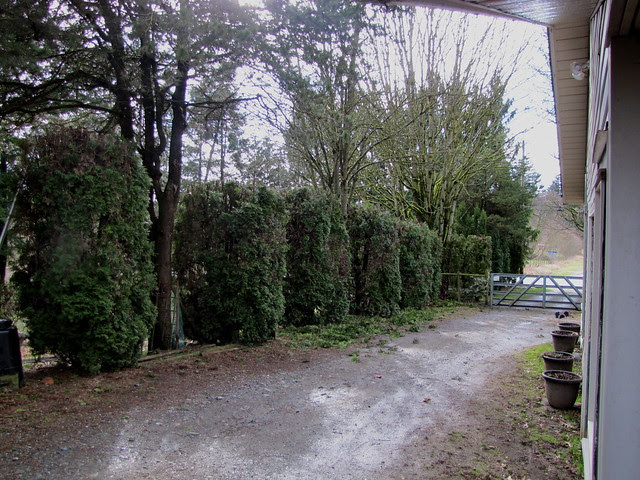 Somehow or other, the previous weekend when David was here, we got talking about them, and the mess they were in and David suggested they could just be pruned right at the ground.  I even jokingly agreed at one point.  It got me thinking about them, and I decided to have a go at tidying them up.  I said to Larry that I was going to see if I could get them all done before David came back this past weekend.  I picked away at them all week.  Some were time consuming, shoulder and wrist aching.  I found the easiest thing for me to handle was the electric hedge trimmer.  Last year we bought a decent one.  I pruned the sides this time too. Some of the top growth was too thick for the hedge trimmer, so I'd have to use the loppers or a saw.  Those two tools were really hard on my shoulders and wrists.  Sucks to get old.   I had to get Larry to cut a few branches with the chainsaw.  Larry has shoulder issues too.  We have an 8' and a 12' orchard ladder.  Most of it I could do with the shorter ladder, but some places needed the 12', with is a pain in the backside to position by yourself.  It's the most stable ladder though.  I spared you pictures of Larry balanced on the tall ladder with the chain saw, cutting branches off a maple tree.   Just like the Preventable commercials we see on TV....What was he thinking?

By the time David had finished work on Saturday, I had them all done except for three at the top of the driveway, that were pruned a couple of years ago, and four just down from them that hadn't been done for 5 years.  Those four were right out in the open, so they were massive, and many of the branches were too thick to cut with anything but a chainsaw.  I had joked to David that I was leaving them to him.  He told me that he had asked his boss if he could borrow the tractor on Sunday morning.  (He works at the horse farm across the road on Saturdays).

So this is how those four got done.  That box chained to the bucket on the tractor is how they move loads of bedding shavings around.  Larry is on the 12 ft ladder, so you can get a bit of a sense of how big those ones have got. 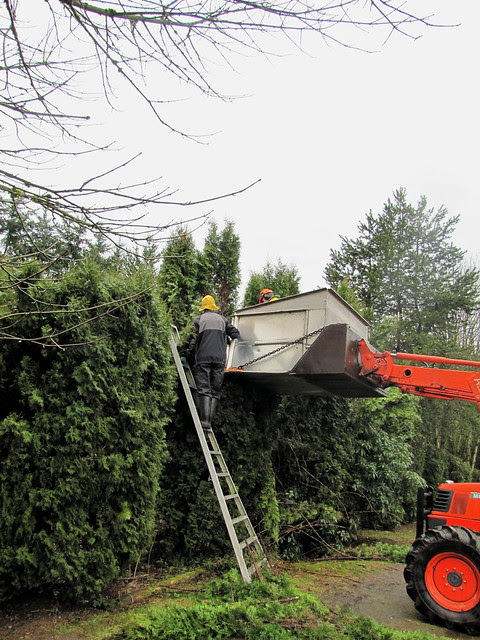 Looking from the other side, from the vegetable garden.
How nice to have someone young, strong and energetic doing the hardest part for us. 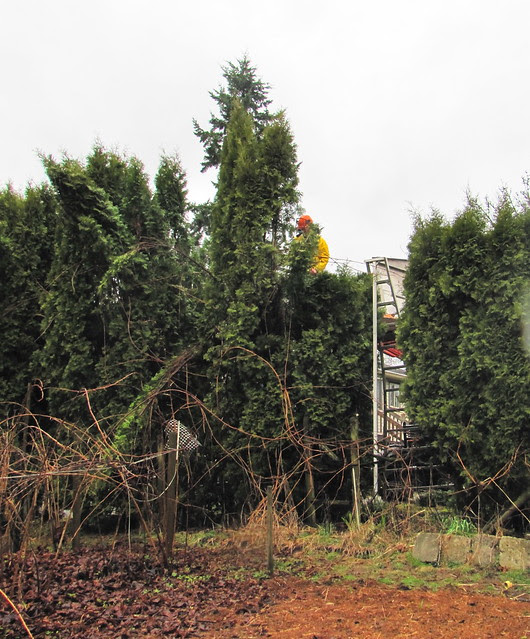 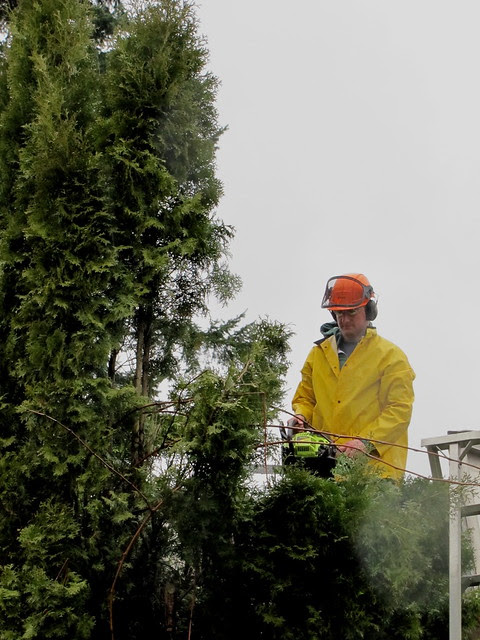 Most of it was done with a small chainsaw, but for some David was able to use the loppers. 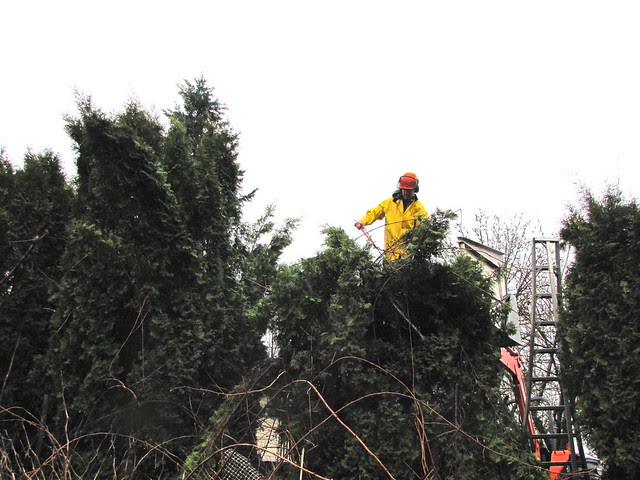 Larry got to operate the big boy tractor. 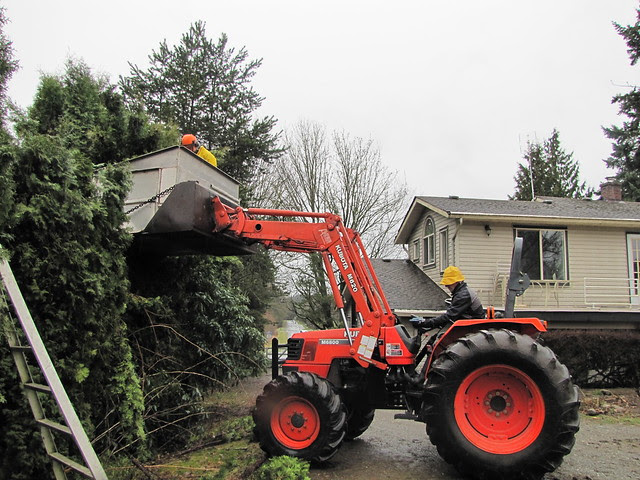 One done, three more to go.  There are three to the left of the ladder that are the ones done a couple of years ago.  It won't take me long to do those. 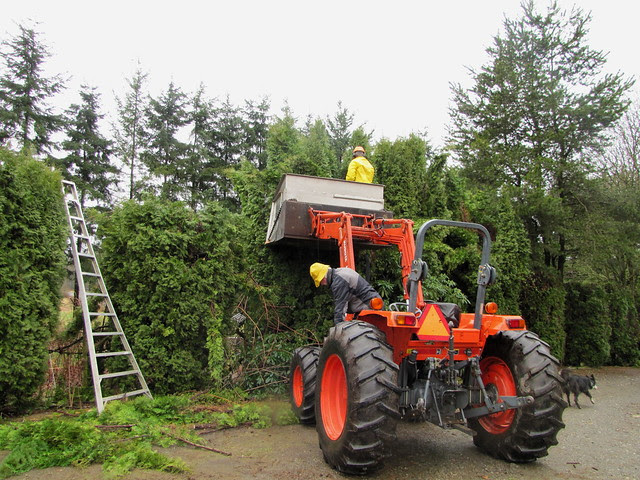 Since I felt like I should be out there, even though I wasn't really able to help, I got the raspberries and the grape vine pruned while I was hanging around.  Since it was pouring rain the whole time, it didn't seem like a good time to be out there with an extension cord and a power tool.

We did load that big metal box up twice with the cuttings, and dumped them in a big blackberry patch.

Oh yeah, that extension cord, well it is now 5' shorter than it was a week ago.
Oops!
On the bright side, I was able to fix it myself.

Thanks so much David!