The Things I Do For Those Dogs!

It's a busy jam week this week.  That's because I was a bit of a slacker the week before, and then was at two markets on the weekend and sold about $500 worth, so now I'm playing catch up.  But this post is mostly about the dogs.  I think most of you know that I feed our dogs raw food.
So this is what I did yesterday morning.
Cut fish heads in half. 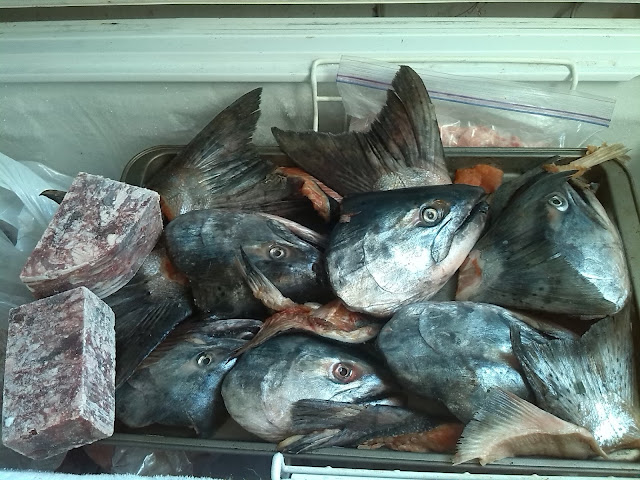 A friend asked me if I wanted some salmon heads.  I'm always looking for cheap and different protein sources for the dogs, so I jumped on it.  The heads were pretty big, so I cut them down the center so that one head became two halves.  So there I am with my thumb stuck in the eye socket to hang on to the slippery beast while I hacksawed it in half.  Have you seen the teeth on a salmon?  They are like extremely sharp saw blades.  So sharp that I actually worry about them doing damage, so I try to rasp the needle like tips off them.  Yep, there I am, rasping salmon teeth.  Probably going a little overboard with that, but if it makes me feel better, so be it.  So they had salmon for breakfast yesterday morning, and then the rest got put back in the dog freezer for future meals.

Now one of the best things we did when we renovated this house a lot of years ago was replace the dinky kitchen window with a big garden type one, so I get a 180 degree view.  So while I'm stuck in the kitchen I get a good view of the goings on outside.  It was entertaining at one point to watch Jake and Luna.  First Luna rolled on the grass, and then Jake came along and flopped himself down and banged into her and rolled around too. Kind of a 'what you can do, I can do better, hey do ya wanna play?'
Nope, Luna had a bone, which appears to me to be from the deer carcass.   Now when that got carried back to the house, I do not know.  They can't get out there without us opening gates for them, and they sure didn't carry it back on my watch.  Must have been when it was just Larry with them, he doesn't notice things quite the same;-) 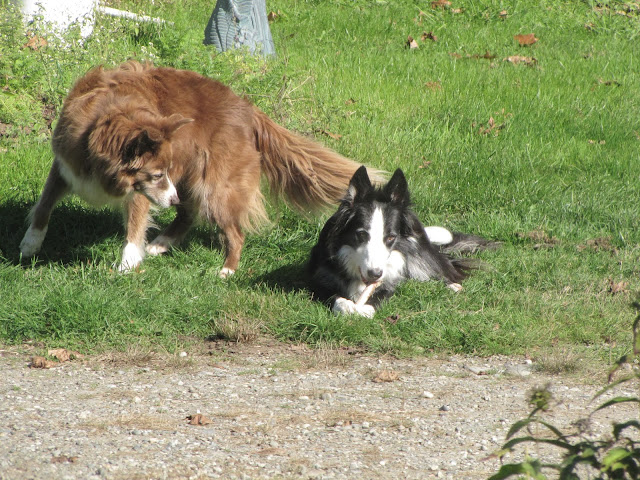 Meanwhile, I was making marmalade.
Then Larry must have been doing something to get their attention down by the house.  Jake was just hanging around, 'cause you just never know.... 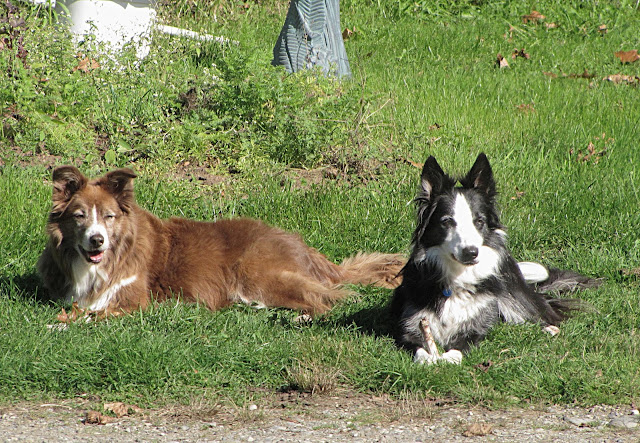 And sure enough, she of a short attention span, got distracted by something else, and Jake scored the bone 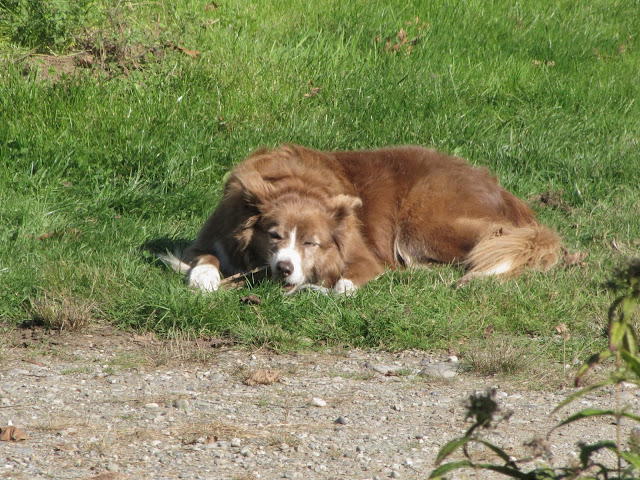 And then when I looked a little closer, Luna was working on a different bone, a shoulder blade of that same deer, I assume. Same story as to how the heck did that make it back to the house? 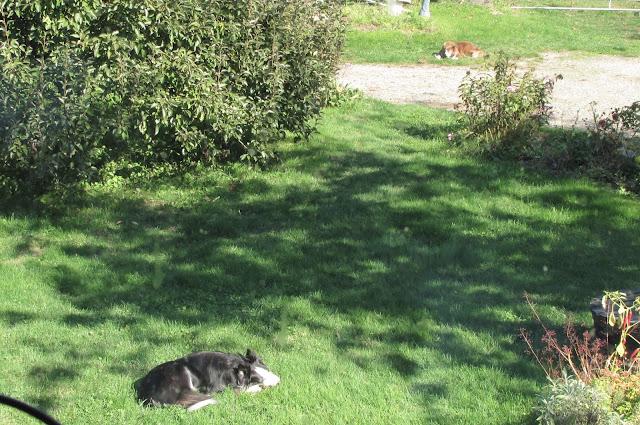 And then Luna decided to leave hers, and head Jake's way.  He turned the other way quickly, maybe to protect the bone, or maybe so he couldn't see the evil looks he knew she would be giving him.
What's mine is mine, and what's your's is mine.....is her motto. 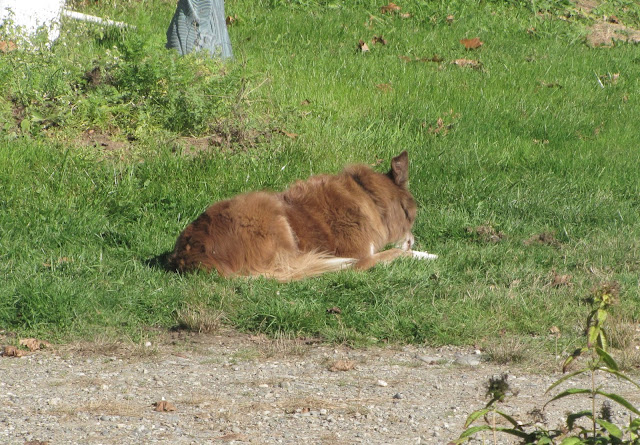 Eventually the marmalade got done, two different kinds, and a batch of jam too.  Then I threw in the towel and headed outside, where I had another lovely job to do.  From the same friend that gave me the fish heads, I had also got a bucket of tripe.  If you didn't already know, tripe is a cow stomach.  It is particularly prized by the raw feeders, because it contains digestive enzymes and probiotics that are great for your dog. If you are interested, here is some info.
Tripe stinks, there is no way around it.  I've found the best way to deal with it is to cut it with scissors. 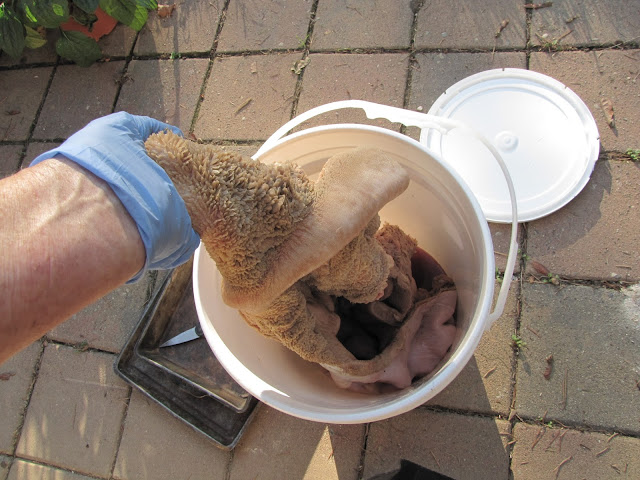 So I was out at the front of the house with Calli, working away on the tripe.  The scissors are kitchen shears, ones I use to cut up stuff for the dogs, and they were dull.  It was hard work.  I even ended up with a blister on the side of my finger.  Eventually Jake and Luna showed up.  Jake didn't stick around for long, but Luna figured she should position herself in front of Calli, you know, so Calli couldn't get to the tripe before her. 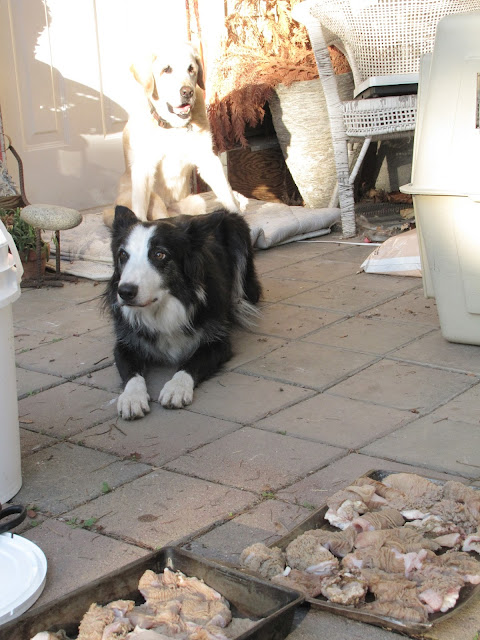 She was snarling at big flies that showed up.  Then I figured Jake must have come into view, although I couldn't see him because he would have been on the other side of the car. 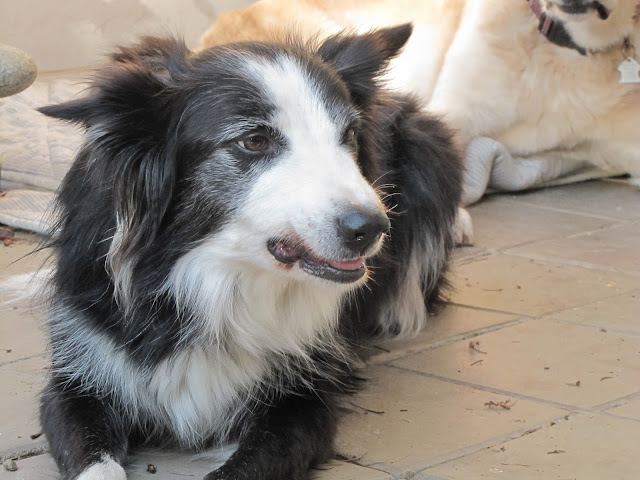 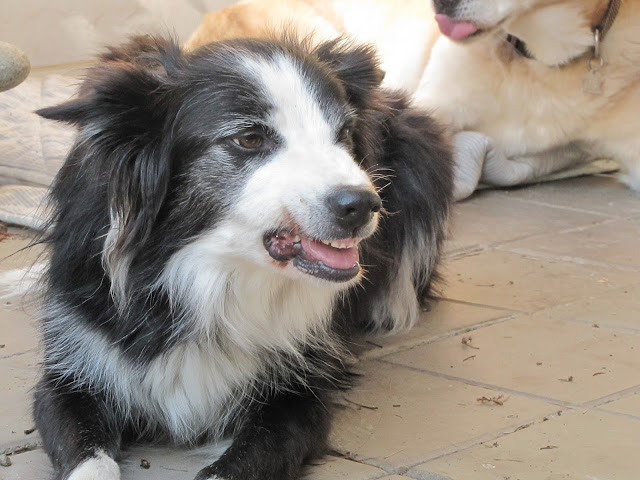 You may or may not notice something funny about her mouth.  She has no canine teeth.  Well actually she still has them, but they are worn down level with her other teeth.  We don't know why, she doesn't play with tennis balls (notoriously hard on a dog's teeth) or chew on rocks.  Yes, she eats raw food, complete with small bones that get crunched up, but that is done with the back teeth, not the front.  Those front canines are for ripping and tearing.

Jake didn't bother coming any closer.  Not that he was even close to start with. 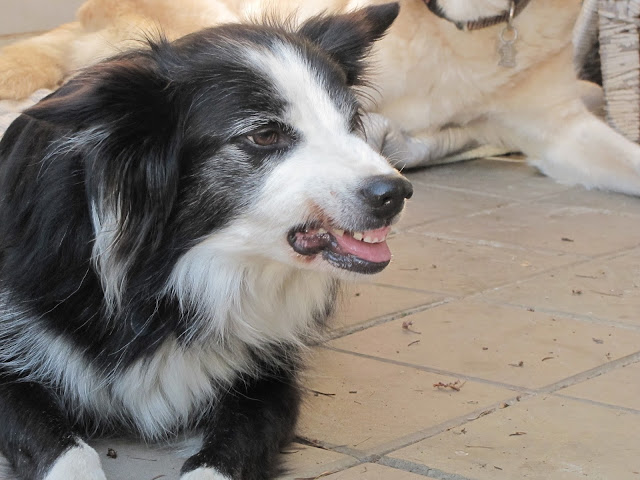 Then Calli moved and she got one of those looks too, and Luna got heck from me for that.
She says but really, I'm such a sweet, sweet dog.. 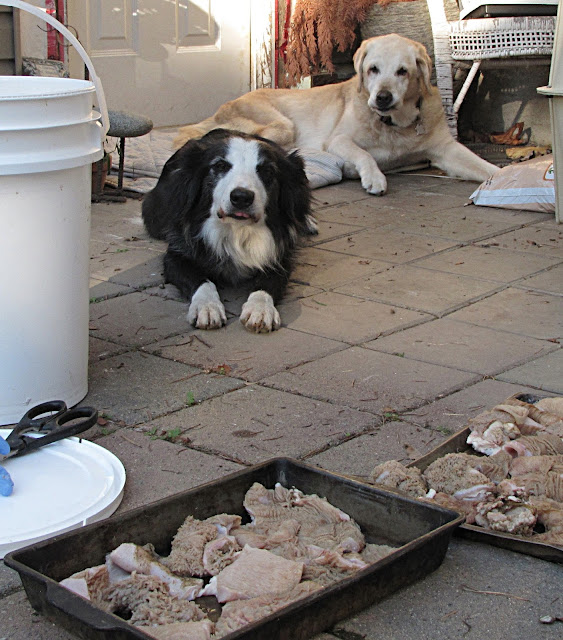 So the tripe all got cut up and onto cookies sheets and cake pans, and went into the freezer.  Once it's frozen it will be bagged up.
I'll bet your day smelled much sweeter than mine!