It was a good market on Sunday.  The weather was good, sales were good.  Compare that to the week before when the wind and rain made things pretty miserable.  Customers were rather thin that day.  And I don't meant that just the skinny ones came out.  When we only sell 28 dozen eggs in four hours,  you know that a lot of people didn't bother to come to the market that day.  Not that I really blame them, I probably wouldn't want to venture out to the farmers market on a day like that either.  But....think of us vendors.  We were out picking the vegetables the day before in the rain.  Or baking all those delicious pastries and breads and other baked goods that you love to buy.  We especially need your support on days like that.  The days that we are struggling to keep things dry, or keep our tents from blowing away, as we set up and take down and stand out there for the four hours in between in the miserable weather. A lot of those items are things that need to be sold that day, and won't carry over to the next week.  We took eggs home that day, it wasn't a problem for us, as they were only a few days old, and were sold within the next week.  We did have a lot of mushrooms left over though.  After trading some for tomatoes and apples with the vendor next to us, and handing generous bagfuls to family members, we ate a LOT of mushrooms that week, and are still working our way through them.  We were one of the luckier vendors I would think.  Sales were decent enough to make it worthwhile being there, but for some vendors I'm sure it wasn't.  The market can't be cancelled every time there is a poor weather forecast, because for many vendors the prep for that particular market starts days before.
Compare that to this past Sunday when we sold ALL 39 dozen eggs in the first half hour, and sold ALL of the mushrooms as well.
Okay, off my soap box now....

After this past market I met a friend for coffee, and then stopped at my secret source for crab apples.  I haven't been there for a few years, but this year I messed up on getting enough crab apples to tide me over until 2016's crop.  So I had to go to my back up plan.  Thank goodness the old tree had some.  Not a bumper crop, and many of them were too high up to reach, and it's a bit of a walk to get to it, and it's in a park, so not exactly convenient to go in with a ladder. 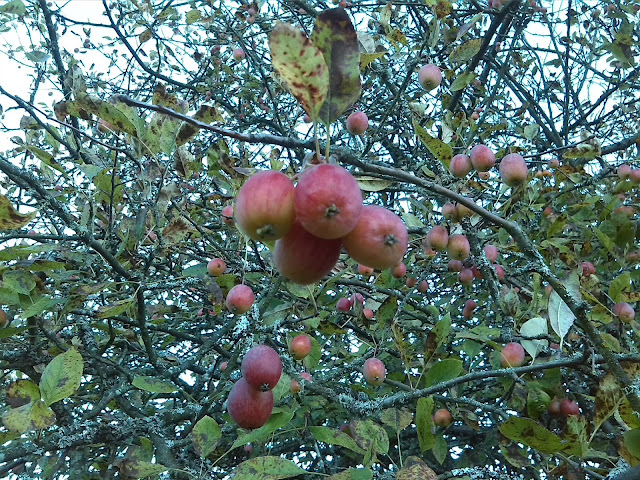 Anyway, I wandered around and managed to collect about 15 lbs. 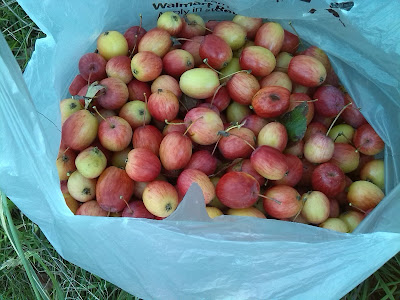 I probably could have got a few more, but the sun had set behind the trees and it was getting cold and I wanted to get home so I could drive to a good viewing spot to see the lunar eclipse.  Although come to think of it that field would have been a good spot to see it, with it's view of Mt. Baker off to the east.  But I didn't have the camera with me and didn't want to wait that long and didn't have enough warm clothes, so head home I did.  (Larry heads home with truck and trailer right after the market because the dogs have been in the house for 8 hours).

When I got home I quickly heated up the leftovers from  Saturday's roasted vegetables and crockpot pork roast cooked in apple sauce (yum!), and scarfed it down.  The three (David was here that evening) of us jumped in the car and drove around the corner and up and over the hill we went.  From there, there is a great view out to the east of Mission and Mt. Baker.  The sky was clear and we were expecting this magnificent sight.  Or I was.  We pulled over and sat.  We could see another car parked further down the road.  There was nothing to see.  We sat there, waiting.  And then David said, 'there it is'.  And there was the palest little sliver of moon, you could hardly notice it.  It was already well up in the sky.  And then we realized that it just wasn't dark enough yet to see much of anything.  And we all said to heck with it, we're not sitting here for another half an hour or more for it to get dark enough, let's go back home, and we did.

So around 8:30 or so I went out on the back patio, it was a pretty cool evening, and managed to get a few not great shots.  I honestly didn't know what I was doing.  I have taken some decent moon shots before, but last night I just felt dumb.  I tried pretty well every setting on the dial, and managed to salvage a few sort of half decent shots.
Now there was something interesting I noticed.  I don't know if you can see it in these photos.  You may have to click on them to enlarge them.  Can you see the tiny red dot to the right of  the midpoint of the moon? 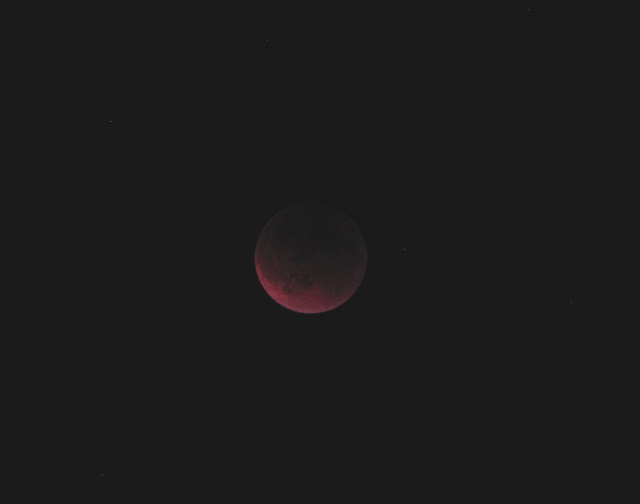 50 seconds later. This shot below is a bit blurry, but that red dot is now in front of the bottom right quadrant of the moon 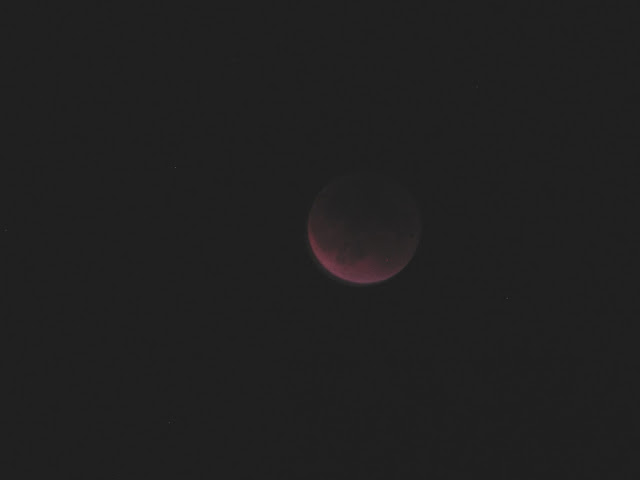 There was another picture of a big blurry blob of a moon, that I didn't post, and that red dot is back off to the right of the moon again like in the first picture.  And then in this shot below,  taken two minutes after the photo above, the red dot is just to the right of the moon, not quite at the mid point on the right side, but much closer to the moon than the picture I didn't show you.  These pictures are posted in the order I took them.  I'm wondering what that red dot is.  I didn't notice that red dot when I was taking the pictures, but did when I loaded them to the computer.   Since the moon is moving up and to the right, as you look at these pictures, the position of the red dot, if it was sort of stationary, makes sense in the first two photos.  But in the invisible third, and then the fourth picture below, how did it get back to being on the right side of the moon again.  Is it circling the moon?  Anyway, that sort of fascinated me. 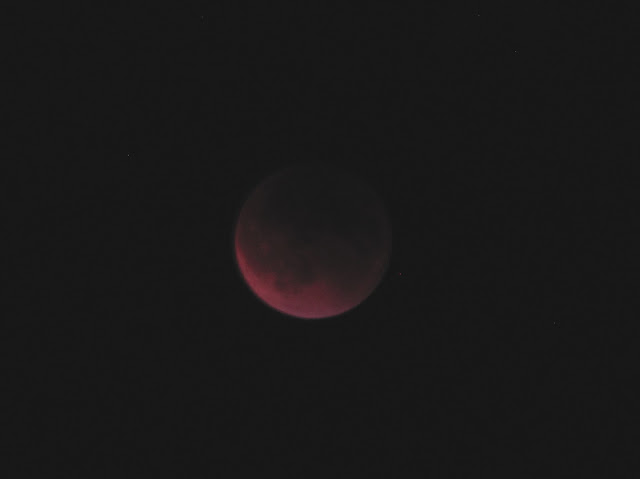 This is my favouite shot here.  The moon is almost starting to come out of a full eclipse.  It was taken 10 minutes after the shot above.  I don't know where the red dot is now. 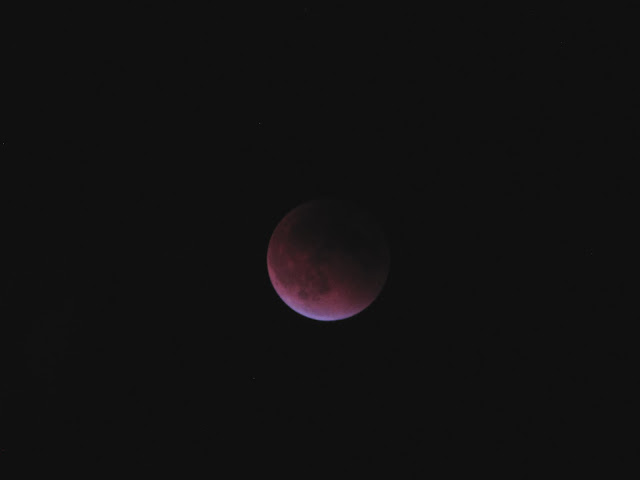 The eclipse is half over. 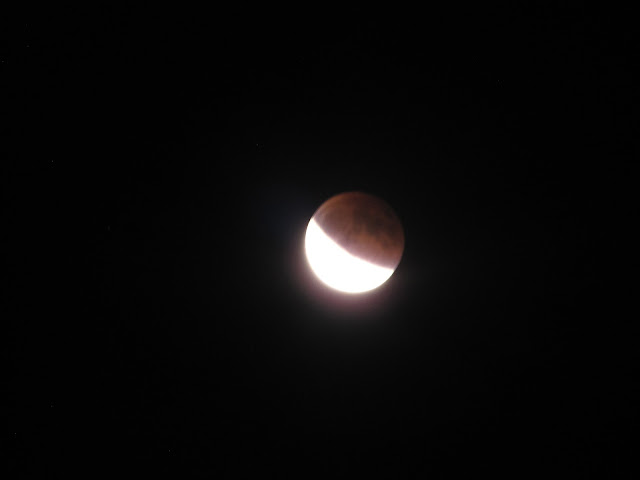 Some time in the early hours, I made a bathroom trip.  Wow, the moonlight outside was something else, really really bright.

This is the moon about 7 this foggy morning, directly to the west from our bedroom window..  At some point it must have really lit up the bedroom, but I managed to sleep through all that. 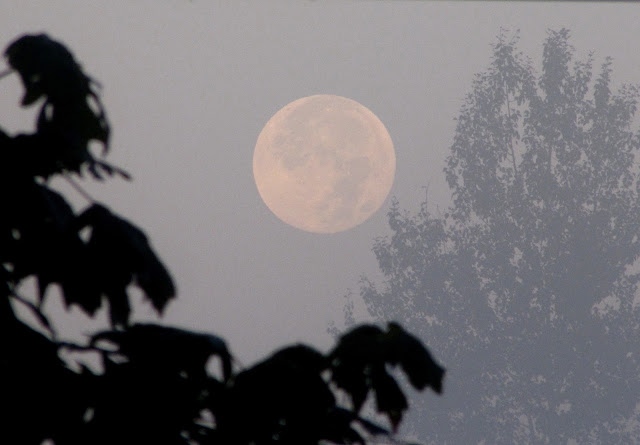