Heading to the chiropractors is the same route we take to the dyke, only a little farther, we have to continue on past the creek to Fort Langley.  The dogs know the route to the dyke, at least it seems that way, and it's almost as though they seem a little disappointed when they get out of the car, and they are in a paved parking lot, with no creek in sight.  Jake has been showing signs of slight lameness, on and off, in his left front leg.  Dr. Lana said his tail was out of adjustment, as was his left shoulder.  She worked hard to get him adjusted, and Jake was not happy about it, and he told her once that ouch! that was NOT comfortable. As soon as he is done though, it is straight to the cookie jar, with very pointed looks from the jar to the Dr., but he had to wait until all the dogs were adjusted.  Something in Luna's back was out, which is par for the course with her.  She is hard on her body, I could probably take her every week to the chiropractor and there would be something that needed putting back in place.  Calli was pretty good, nothing much was too out of place,  and Dr. Lana was flabbergasted when I told her that she was 15 years and 9 months old.

It was an absolutely beautiful Fall Day, and as promised we stopped at the dyke for a walk on the way home.  Jake and Luna got a bit of a swim, I had nothing to throw for them, and not a stick in sight, but I managed to fake them out a few times by throwing rocks.  Calli had a deep wade, and put her head under a couple of times to find the perfect rock. 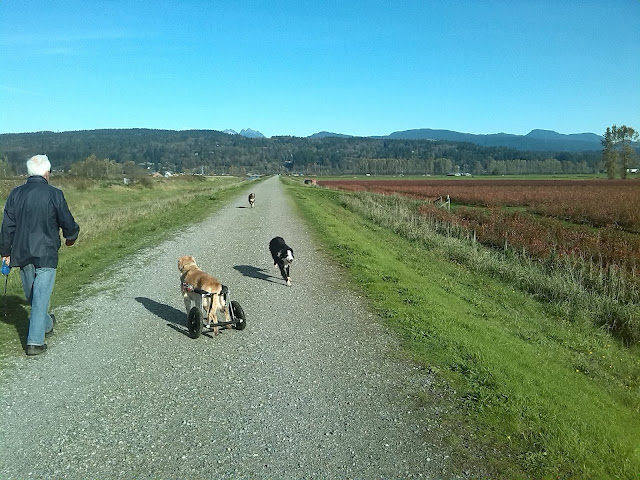 Look at the old lady go!  We walked two miles and all at a pretty good clip.  This was on the way back, about half a mile to go, and carrying the rock in her mouth.
Calli the wonder dog @ 15 3/4years.